Why We All Need to Experience Failure to Move Forward

Darleen Barnard is Board Certified Health Coach and Personal Trainer who specializes in weight loss by using the power of the mind.

Most people view failure as something negative. Let’s face it, nobody likes to fail. In school, we are taught that anything less than a 70% is failing and failure should be avoided at all costs. When our favorite sports team loses, we certainly don’t celebrate.

As John Maxwell states in his book Failing Forward,

“The difference between average people and achieving people is their perception and response to failure.”

Thomas Edison completed 10,000 experiments before he created the light bulb. Around the time of the 9,000th experiment, he was asked how he found the resilience to keep experimenting despite all of his failures. He looked at the person puzzled. “What do you mean failures”, he asked? “I haven’t failed. I have successfully found 9,000 ways NOT to create a light bulb.” Edison didn’t view his 9,000 experiments as failures. Each time he experimented, he knew he was one step closer to figuring it out. He knew the secret to success - you only “fail” when you stop trying.

If you were Edison, would you have still been conducting experiments after 9,000 attempts?

Would you have viewed all those attempts as successful experiments or failures?

Failure is a necessary part of life. We ALL fail!

How many times did we fall down before we started walking? How many years did it take us to learn how to talk and build our vocabulary? It’s a good thing we didn’t think failure was bad when we were little; otherwise, none of us would be walking and talking today!

Benjamin Franklin stated that the only things certain in life are death and taxes, but I would like to add…failure. It’s almost guaranteed that we are going to fail at something in life. Accept it. Embrace it. The only people who never fail are those who never try.

Let’s try a little exercise to test your perception of failure. Answer the following questions honestly. 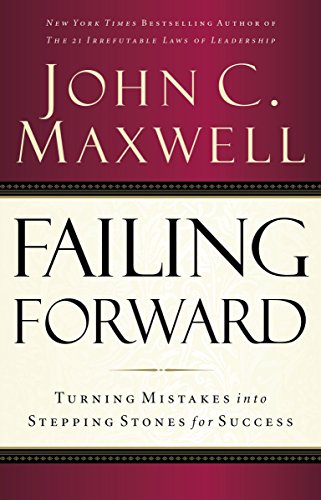 Failing Forward: Turning Mistakes Into Stepping Stones for Success
I recommend this book to many of my students and clients. It really helps you change your perception of failure and sometimes even be "happy" that you failed because it means you stepped out of your comfort zone and tried something new. Excellent book!
Buy Now

I challenge you to change your perception and your response to failure. Begin to recognize failure for what it is – a failed experiment. It isn’t personal. We should all view ourselves as scientists who conduct experiments on a daily basis. Some experiments will work and others won’t. It doesn’t mean we are a bad scientist, it just means that some of our experiments didn’t work. And if we are a scientist who doesn’t conduct experiments because we are afraid of the results, are we a successful scientist?

If you haven’t failed in a while, maybe you are playing it too safe. Are you playing little league when you have the skills to play professional? What could you achieve if you stepped out of your comfort zone and risked failing? What if you surprised yourself and didn’t fail? What would you have or be if you tried and succeeded?

To close, I encourage you to stop and think about how failure has shaped your life. Think of all of the positive things that have come from those failures and all that you have learned about yourself.

If you tried last week to eat healthy and you did great all week until Friday night at happy hour, what did you learn from that? What will you do differently this week when you go to happy hour?

If you tried to quit smoking and you did great until you took a long road trip to visit a friend, what did you learn from that? What will you do differently the next time?

Do you view those two examples as failures or successful experiments?

If you have an achieving mindset, you will view both of those attempts as successful experiments. You learned something about yourself and like Thomas Edison’s 9,000 experiments, you now know what NOT to do. How you address those risks going forward will determine the outcome of your next experiment.

If you have an average mindset, you will view those attempts as failures and will stop trying eventually.

Whatever has happened in the past, stop now and reflect. Learn something! You will eventually succeed as long as you don’t stop trying.