Coping With Fear of Flying

Being scared of flying, or having a flying phobia, is very common, even to those who have to fly every week. I had an awful fear of flying for many years because I suffered with panic disorder, and automatically assumed I would have a panic attack on the flight. This is the bottom line of what most people fear; panicking or of course death! Despite airplanes having an extremely high safety record, so many of us just don’t trust that we will be okay cruising along at six miles in the air!

Because I have now flown four times without any fear, I want to share with you what I did, and other things you can try to eliminate your fear of flying.

Why are we Scared of Flying?

It helps matters a little if you actually recognize what exactly you are frightened of or your biggest fear. Here are some examples of why people fear flying:

All of the above and probably any other flying fears you might have, are all likely to have one common theme; that of not being in control. What we tend to fear most in life are the things we don’t understand, and the things we can not control. Taking this into consideration, how can you understand better and learn to take back some control?

Understanding what Happens During a Flight

Most of us don’t know much about airplanes. On a flight we hear noises and wonder what they are. The plane may suddenly make a different movement or start to shudder, and we wonder why. If you are already very anxious, it is this sort of thing that can make you panic.

Get to know as much about the plane itself and the safety of planes generally. You can do this at home by looking it up on the Internet. YouTube has several videos explaining flight noises, turbulence and how airplanes are checked for safety.

Anxiety before a Flight

Your thoughts in the weeks or days before you fly are of paramount importance, in how you will cope on the day of the flight.

Fear builds when your imagination runs riot with lots of negative thoughts, and playing out fateful scenarios in your mind. Catastrophic thinking will set you up for a certain bad experience. You will be convincing yourself that there really is something to fear and that your attitude is justified.

I remember that when I had a flight coming up in a few weeks, I would be thinking about it on and off all day, every day! Nearer the day of the flight I couldn't even sleep, such was my intense fear.

If you consider that positive thoughts tend to breed positive outcomes, you should try some visualization in the weeks leading up to your flight.

Anxious about Getting on a Plane?

Visualization Before the Flight

Obviously it helps to try a visualization technique if you have flown before. If you haven’t flown before, see the procedure below for what you have to take into account.

For anyone who is very nervous about flying, as you can see, there is ample time for your anxiety to increase a lot within the airport. Being able to see the airfield and planes moving around, taking off or landing can also increase your anxiety.

Use Your Imagination For Your Fear of Flying

So that you are as relaxed as possible before boarding the aircraft, try the following in the weeks leading up to your flight. It might also help to have bought a guided relaxation CD, so that you can learn to relax before visualizing. You are going to use your imagination to have a positive flying experience.

I am sure that you now get the general idea. For those who have experienced a flight before, you can use your knowledge of boarding the plane, and the flight itself for further visualization exercise. You are practicing positive thoughts within a perceived negative situation. These visualization exercises should be practiced over and over leading up to your flight.

Helpful Audio for Fear of Flying 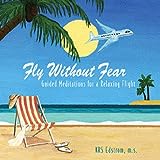 Ideas to Cope with Fear of Flying

If all that visualization doesn't come easy to you, or doesn't seem to help, here are some other ways to at least cope better when flying.

EFT for Fear of Flying

More Tips for Fear of Flying

How I Conquered Fear of Flying

Some people turn to a xanax or alcohol (or both!) when they are scared of flying. I personally, don’t think this is a big deal if you fly once or twice a year, but it’s certainly not the answer if you fly regularly and is merely a form of permanent avoidance.

I cured myself of my flying phobia by using the visualization technique I described, along with relaxation and meditation audio CDs. I also decided to face the fear head on with facts instead of irrational thoughts. I was scared of a bird flying into an engine, mid air collisions and crashing. I would take a valium for flying AND have a couple of glasses of wine (not recommended), but my fear was so great even that didn’t help!

I always practiced relaxation or meditation, and visualization for around six weeks before my flight was due. I had much relaxation/hypnosis self-help on my mp3 player, and I would listen to that in the seconds before take off and for the first half hour of the flight. If any negative thoughts did come during the flight, I just switched on my mp3 player, closed my eyes and went back into deeper relaxation. I only had to do this on two flights and then I didn’t need to do it any more. In fact, on my last four flights, I had no valium, no alcohol, nor relaxation audio; and I can honestly say I enjoyed the flight and couldn’t look out of the window enough!

Whatever our imagination tells us, flying IS the safest form of travel. I told myself that if the plane was going to crash, it was going to crash and there wouldn’t be a darn thing I could about it! I also thought, if I die, I don’t die alone. I love traveling abroad and seeing new places, but there was a big chance that my fear would have prevented me doing this. The best way forward, as with any phobia, is to face it head on, address it and move on…preferably upwards into the beautiful blue sky!