How to Prevent Urinary Tract Infections

All those who have witnessed the burning sensation and urgent need to go associated with a urinary tract infection may feel compelled to find a way to effectively keep such infections at bay. With over seven million office visits a year due to UTI's and with UTI's being the second most common infection affecting humans after respiratory infections, looking at tips on how to prevent them in the first place comes as no surprise. There are many things that can be done to stop urinary tract infections from coming back, below are some helpful tips.

Perhaps the most important step to prevent recurrent UTI's is to understand them better. Knowledge is power and it is a well known fact that knowing an enemy is the best way to fight it. Urinary tract infections are basically infections of the urinary tract caused by bacteria. One of the main culprits is E.Coli.

Drinking lots of water ensures that the body is efficiently flushed from bad bacteria. The recommended adage ''drink 6-8 glasses of water a day'' is not just meant for those obsessed with healthy lifestyles. Not drinking enough allows the urine to concentrate turning it into an ideal environment for bacteria to thrive.

Try as much as possible to go when nature calls. Waiting too long and too often will stretch the bladder to full capacity weakening the bladder muscle and making it more prone to urinary tract infections in the long run. Also the longer urine is kept, the more likely it will become a fertile ground for bacteria to thrive.It may be challenging at times to take bathroom breaks during work hours, but going as needed is highly recommended.

This applies to women: right after a bowel movement you should wipe from front to back. Remember how E. Coli is the most common cause of a urinary tract infection? Well, this is often because E. Coli is found in the stool and around the vaginal and rectal area, and by not wiping the right way, this bacteria may easily make its way up the urinary tract through the urethra.

Again, this applies to women. Sexual intercourse may allow bacteria such as E-Coli to travel from the vaginal area up to the urethra. It is highly recommended therefore to wash the area well both before and after sex. Urinating before and after sex is also a good way to flush away bacteria A shower is preferable than a bath, since a bath may allow bacteria to travel towards the urethra. It also appears that some sex positions are more likely to aid bacteria to travel up the bladder.

The use of scented douches and hygienic sprays may irritate the urethra making it prone to a urinary tract infection. These products may also alter the natural chemical balance of the vaginal area making it more prone to infections as well.

Tampons are a better solution than sanitary pads. Pads trap moisture and may allow bacteria from the rectal and vaginal area to travel up the urinary tract. Tampons however should be changed at least every 3three to four hours.

The best underwear should be made of cotton. Other materials may not be able to absorb as well and may trap moisture, creating fertile grounds for bacteria to thrive. White underwear is also preferable since color dyes may irritate as well. Cotton should also be present in the crotch area of nylon pantyhose.

Tight clothes such as skin-tight -jeans (especially those tight around the crotch area) may as well trap moisture creating a bacteria friendly environment. Use instead cool, loose clothing.

Cranberry juice and/ or other drinks very high in vitamin C should be a dear friend for those trying to prevent UTI's. This comes thanks to the acidic levels of such drinks that create an inhospitable ground for bacteria.

As seen, there are several steps that can be taken in order to reduce the incidence of getting annoying urinary tract infections. While such steps may seem like a lot, they ultimately lead to better hygienic practices, healthier fluid intakes and over all, a better lifestyle. 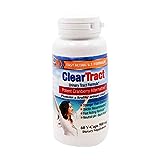 Cleartract D-Mannose Formula Capsules, 500 Mg, 60 Count
Great Reviews! Much in the same way cranberry works, ClearTract interferes with the ability for the bacteria to cling this is sometimes called the "anti-adherence effect" ClearTract takes this effect to a whole new level and accomplishes more than cranberry has ever been able to achieve. 10-50X stronger than Cranberry ! No Side Effects ClearTract contains D-Mannose can be faster and more effective, especially in dealing with chronic problems, and it doesn't have the side-effects or other problems associated with antibiotics.
Buy Now

You Don't Have to Live with Cystitis
Many women have been led to believe that a urinary tract infection signals the beginning of a chronic, painful problem that is fated to reoccur despite treatment. The good news is that You Don't Have to Live With Cystitis. Dr. Larrian Gillispie, a female uro-gynecologist widely recognized in the scientific and medical community and one of the few doctors with expertise in the area of pelvic pain, has shown that women can break out of the vicious cycle of cystitis.
Buy Now