How to Set Boundaries and Be More Assertive

It's normal to have emotional collisions when our values and expectations are different from another person's. For some people, boundary management is at the root of many problems in their life: People who don't have healthy boundaries feel more stress, have more relationship problems, and don't find their lives as rewarding as they could.

Learning to set good boundaries is a challenge, though! I've seen many misguided attempts that fail to solve problems and can actually make matters worse. For instance, when I found myself trying to establish some in my early twenties, I complained, made threats, and ended up in arguments instead!

This article is designed to help you figure out how to set boundaries, when to set them, and what you must do to enforce them.

It's true - we train other people how to treat us. By being assertive, we can command respect and cooperation from the people we interact with in our daily lives. On the other hand, if we are passive, we feel victimized, and if we're aggressive, we manipulate and bully the people we claim to love. Boundaries are the curbs that form our roadway to inner peace and keep us on our journey. Without them, we're likely to veer off the straight and narrow and find ourselves in a jungle of trouble!

How do you think other people perceive you?

Is it Ok to Offend Others by Having Boundaries?

In order to be assertive, you'll need to develop your confidence. The good news is that as you practice making and enforcing healthy, assertive boundaries, your confidence will build on its own!

If you're lacking confidence now, though, the idea of setting boundaries can feel overwhelming. You may think "But people will stop liking me!" "If I start doing this, my marriage will crumble!" You're right - some people may like you less when you start asserting yourself. Changing yourself will cause your relationships to change. But if you were happy with those people and relationships, you wouldn't have read this far!

People who value you will come to appreciate the changes you make and adapt to them. People who value what you do for them more than they value you are less likely to adapt. They'll try to sabotage your efforts and keep you in a subordinate position that lets them have more control. Only you can decide if you're willing to take this chance.

If you're want to make changes but feel overwhelmed, start using daily affirmations. Each day, stand before a mirror and affirm your strengths and goals with statements like the ones below. Don't leave the mirror until you can make yourself feel convinced!

For many other examples of affirmations, check out this page. If reading a page on the Internet isn't enough to develop a habit, check out the book Affirmations: Your Passport to Happiness, which is available from Amazon: 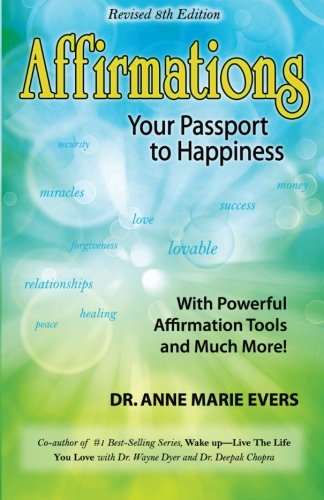 Affirmations Your Passport to Happiness 8th edition
This book is described as a life-changer by people who had tried affirmations before and felt like they didn't work. Don't miss this opportunity to bring positive energy and power into your life.
Buy Now

Remember when I said boundaries are like curbs that keep you on your road to happiness? Well, when people make mistakes in setting their limits, they discover weak points in the road that bring more problems.

Your boundaries are about what YOU will and won't tolerate in your life, and should apply to everyone who comes into your path. You shouldn't accept a behavior from your spouse if you wouldn't accept it from a cashier at the local grocery store.

Let's take a deeper look at this, because I can already imagine that you're thinking, "Hey, I like it when my husband gropes me, but I'd call the cops on someone else!"

As you develop your list of boundaries, it will be helpful to use words that distinguish what is and isn't acceptable. For instance, when I completed this exercise in my twenties, I was instructed to only list things that applied universally to everyone. Instead of trying to find distinctions between actions that can be done by one person but not by another, I was forced to think long term. If my relationship didn't work out, I would at some point be sexual with someone else again, so I wrote, "I will not accept sexual abuse." This meant my need for sexual touch could be met while still protecting me from effects I did not want.

You'll need to do the same as you draft your list of boundaries. Only write down what you will not accept from anyone, ever!

If you don't follow this tip and instead make a boundary like, "I won't tolerate my spouse rolling his eyes at me," when you wouldn't make a scene if a stranger did it, then you aren't setting a boundary. Instead, you're criticizing your spouse and adding the word "boundary" to dress it up and try to make it appear okay for you to be critical.

Finally, if you make and communicate your boundaries but do not enforce them with something other than argument, you'll find that they're worthless. People will ignore them if they come to see that you won't protect what you claim is important to you. If you won't protect your interests, why should they?

Ok, let's get to the nitty gritty. You are already thinking about the things you won't accept from anyone. Now get ready to make your list, but first, write these things down first:

Next, draw a line to create two columns. One column will be "MY BOUNDARY" and the other will be "WHAT I WILL DO IF IT'S VIOLATED."

Although I made my list many years ago, it looks remarkably the same today as it did when I created it:

Note that although I've used the word "relationship," this can apply to a friendship, acquaintance, or a relationship that is not developed!

From here, it's up to you to enforce the consequences with tactics that are appropriate for the situation. You don't have to write out, "I'll go stay with my mom for two weeks," in order to start enacting the consequence of leaving a relationship. You don't have to describe the words you'll use to say no to requests. (See the Amazon books I've included if you need help with this!)

You also don't have to be trapped into leaving forever and ever, amen. By having your consequences laid out in an amount of detail that you are comfortable with, you will be able to determine the best course of action when an event violates one of your boundaries.

More Tools for Your Journey

Safe People: How to Find Relationships That Are Good for You and Avoid Those That Aren't
Learning to recognize people who will respect your boundaries will make it much easier to maintain them.
Buy Now

A Final Note on the Page

Your list should only take up about a page. If you find yourself filling a second page or leaking onto a third or fourth page, carefully consider whether you may be trying to control others!

On that note, there are two more things to write after you've made your list. At the bottom of your list, add these reminders to yourself:

Don't worry if you find yourself making adjustments to your list or sometimes making mistakes along the way. It happens to the best of us! By keeping your boundaries clear and concise, you'll still be able to prevent yourself from straying too far into emotionally treacherous territory.