How to Start Running When You Hate Running

I was the kid in my high school who faked illness to get out of the weekly "mile test" in PhysEd. There simply wasn't any way I was getting myself around that track FOUR times in ten minutes. Not when I was plagued by side stitches, cramps, nausea-- basically every type of ailment ever experienced by humanity. I hated the pounding. I hated the exertion. Most of all, I think I hated the disgrace.

Music Can Be a Great Motivator, Too

Twenty five years later, I found myself running past that loathed high school track at mile thirteen of a long run I was doing with a running buddy as part of the training for my first marathon. Drenched in sweat, yes, and exhausted, but smiling. And laughing with my friend, another self-proclaimed (but now reformed) P.E. deserter, about the incongruity of the situation. What changed, you ask? Everything. And nothing.

Something urged you to click on this article, even if running around the block currently sounds like a fruitless and Herculean exercise in masochism to you. That same something made me follow through when a friend basically conned me into running a 5K by telling my kids colorful stories about finish line goodies before she told me she'd signed me up to run it. But my complicated relationship with running didn't begin at the starting line that day.

I'd always peered curiously at runners and joggers as they passed me on the sidewalk, trying to decipher their facial expressions. All different ages, shapes and sizes, they all appeared to be working hard but most were smiling, or appeared to be lost in thought. And they were everywhere-- along the beachfront path, careening around hilly hiking trails, jaywalking in front of me. What was their secret? What enabled to do this thing that was so inaccessible to me; what drove them? So when the challenge was in front of me, I begrudgingly started training for that first 5K race, partially as a social experiment to see what secrets this mysterious club had in store.

Why Don't You Run?

Where Can I Start? Should I?

Now, in my circles, I'm the one who can't stop chattering about running, so friends and colleagues come to me with questions. Frequently, they're wondering what the appeal is, and if they could possibly be indoctrinated. People are attracted to the idea of running due to its flexibility (you can do it anywhere with little to no equipment, at least until you become a running nerd), its superior calorie bang for the buck, and not least of all, because of peer pressure from friends who run and those captivating finish line photos all over social media. All of those reasons are perfectly valid. Start running for someone else--for any reason at all--and you'll end up running for yourself.

But as you sit on your couch, contemplating the task at hand and it's genuinely repugnant to you, where do you start? First, before you begin any exercise program, it's wise to consult with your doctor. It's probably time you had a physical anyway. Assuming that's out of the way, it's time for some self-reflection. You can even do that over a bowl of popcorn, Successfully embarking on a running program may involve more self-awareness than beginning other forms of exercise, because there are so many options. Do you thrive on alone time or time spent in the company of others? Do you like spending time in the wilderness or in a bustling downtown? Do you have a reputation for being a 'type A' go-getter, or someone laid back and fun-loving? A morning person or a night owl? The bad news is, no matter how you answer these questions, you still don't have an excuse to avoid running.

My Other Training Buddies:

Time to Lace Up

Once you've figured out your "running personality", try to accommodate as many of your preferences as possible. If you're a nature nymph, look at your stash of trail maps and try to recall a fire road or path you've enjoyed hiking before. If you're a social butterfly, call a few friends and let them know that you need to talk this week-- while you're on the move. If you're an analytical type, grab a stopwatch and head to the nearest high school track to time yourself as you loop around. Full disclosure: as I add miles to a running program, I've been known (more than once) to drive to the nearest brewpub, park there, and go for an out-and-back with a frosty pint as an incentive to finish. The key is to make every aspect of this plan enjoyable, perhaps except for the running itself. That usually takes time.

Next, lace up your shoes and grab a watch. You don't need to buy specialized running shoes quite yet. Any reasonably new cross trainers or athletic shoes will do, at least until you're sure you're ready to commit to this for a few weeks. And are you ready for some good news? You're going to ease into this. There are few activities harder to jump right into than running, so you'll be starting slow. 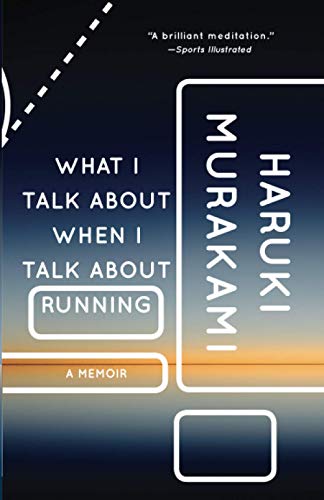 Spirit of the Marathon
Buy Now

Take it Easy: The Program

Aim for twenty minutes of movement for your first week. On the first day, walk for a few minutes to warm up, then try running at a moderate pace for a minute. Then walk for the next four minutes.Continue this pattern until you have a few minutes left for a walking cool down. Every other day will be a rest day. Cross train if you like, put your feet up, and realize that this well-deserved rest is a feature of even the most rigorous marathon training programs. The next day, you'll increase your ratio of running to walking, keeping with the same basic strategy, but increasing your running time to two minutes and walking for three minute intervals in between. After another day off, you'll aim for three minutes running followed by two minutes walking.

Continue this pattern as you build up to five minutes of continuous running. Once there, try adding a minute of running while holding your "walking minute" steady, i.e. running for six minutes, walking for one, then on the next outing, alternate running for seven with walking for one. Once you're up to ten minutes of running, you're probably ready to ditch the walking altogether, but lest the thought of giving it up makes you cringe like a toddler scared of losing his blankie, give yourself permission to walk at any point during a run if it becomes truly uncomfortable. Again, this is a technique that even advanced runners use as they pile on the miles.

As your fitness increases, you may experience varying energy levels and some minor aches and pains. Rest as needed, pay attention to acute pain, but realize that continuous effort here is key to pushing through to the point at which the process starts to have its own momentum, which is the point at which it becomes satisfying and you start to experience some of the payoffs of increased energy, better health and improved mood.

This is a very basic and achievable approach for anyone beginning a running program. Just make sure to keep it fun!

Every runner will tell you that some days are better than others. Most of them will tell you that that legendary "runner's high" doesn't even begin to kick in until after the third mile, or around half an hour (I will sign an affidavit to that fact... in blood!). But if you've found yourself smiling EVEN ONCE on one of your runs, even if it's in response to a joke your running partner told you as you limped along together, you're on your way to joining that club of glowing and gleaming runners. You know who they are. You've seen them. That's why you're even considering this. Now get out there, and keep going.

Questions? Comments? Complaints? Want more advice? I welcome them all! Leave a comment and I'll get right back to you.