Through her passion for writing and coaching, Rachael shares her experience and support in the journey of loving an addict.

The clinical name for nail biting is chronic onychophagia and this common and seemingly innocuous habit can mean shame and frustration for those who haven’t been able to rid themselves of it.

Nail biting can occur at times of anxiety, fear, concentration or nervousness providing comfort in stressful situations. Most nail biters also tend to bite when they are in an equally relaxed state of unconscious, for example watching TV, reading, or daydreaming.

Some clients may pick at the nails, as well as biting and others may also extend their habit to not only picking their fingernails, but also their toenails. This may cause even more shame and embarrassment as the client acknowledges the social stigma of such an activity.

Although most people who bite their nails state that there is some comfort and relief achieved while biting the nails, the shame and embarrassment around the resulting finger and nail condition, and the frustration of not “simply being able to stop”, tend to grow once they become aware of what they are doing and ‘consciously’ knows they no longer want to continue.

Hypnotherapy is an excellent tool for providing a way through and out of the nail biting habit once a you are ready to break free of the compulsion and positive results can often be achieved in just a few sessions.

In most cases the nail biting doesn't have a major emotional or psychological link behind it, other than the possible psychological issues caused by the habit itself. A session between client and therapist should involve exploring this possibility but the behaviour is more likely a common physical habit, a ritualistic pattern that falls into the same category as other nervous behaviours such as thumb sucking, hair pulling and teeth grinding and can usually be broken without needing to unearth any deep underlying issues.

Nail biting can seem, for those unaffected by the habit, like a small issue to deal with but when a nail biter is freed of the urge and the ‘compulsion’ that has been with them for a long time, the changes can be as uplifting for them as someone who has released much larger issues.

During Hypnotherapy treatment for nail biting, substitution and association techniques are an extremely effective way of curbing the compulsive, repeated behaviour.

Providing the suggestion that the nail biter substitutes the urge to bite or pick with a new desire to drink water or to take a deep breath in and slowly exhale out are not only excellent health giving substitutions but also provide a pause where normally there would be an instant unconscious action.

Likewise, creating an association between the action of biting with an unpleasant taste and uncomfortable feeling can reduce the satisfaction and pleasure gained from biting, which in turn can help to deter the behaviour.

Hypnotherapy is recognised as one of the most effective, least invasive techniques for dealing with nail biting and requires very little investment in time or money compared the relief and confidence gained in ridding oneself of a long term habit.

If you are interested in seeing a live session of hypnotherapy for nail biting you might want to check out Richard Bandler's The Bandler Effect DVD in which he conducts a fantastic dual session for smoking cessation and nail biting.

These pre-recorded CDs for use at home are also a great way to start addressing the habit of nail biting: 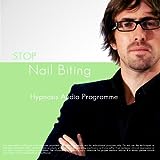 If further support or personalised help is needed, a local Hypnotherapist should be able to help with the nail biting habit, as well as other compulsive habits.