I HAVE MRSA, NOW WHAT? Stye, boil & infection

My story started after the c-section birth of my fifth child.

My scar burst open and started oozing all types of nasty pus and infection. I immediately called my doctor and was told to clean it everyday with peroxide and a clean bandage. I was also given an antibiotic.

My infection cleared and all was well, or so I thought.

About a month later I started getting a painful stye in my eye. I threw away my make-up and the stye cleared only to receive another one in the other eye about 2 weeks later. This saga continued until I had gotten a total of 9 to 10 styes in both eyes over a course of 6 months. I finally went to the drop-in clinic and was given an eye ointment antibiotic to use for 7 days.

The styes cleared and about two weeks later a boil started on my chin. The boil became very painful and turned into about 3 boils. I immediately went to another drop-in clinic and told the Doctor about my saga.

She lanced 3 boils and noticed about 2 more forming. She also decided to swab me to test for MRSA after hearing my story.

I returned 2 days later for a follow-up and was given two antibiotic shots in the hip and in about 4 hours I already noticed a difference and was feeling much better.

I was told to clean my entire body and the infected areas with Dial antibacterial soap, keep applying the cream to my boils and keep therm covered. I was also to continue the antibiotic I was currently on. 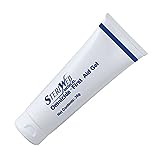 My test results came back and I did have the MRSA strand of bacteria.

I asked what I needed to do:

MRSA is not usually dangerous to a normally healthy individual - it most dangerous to an infant or an elderly person of whoms immune system is weakened.