Krill Oil vs. Fish Oil: Which is Better for You? 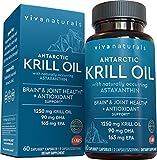 People have been consuming fish oil for quite some time now because of the health benefits that it is said to contain. But there are many different kinds of fish which can end up in the production of fish oil and we're coming to find out as time goes on that there may be certain kinds which are better for the body than others. Specifically, what might be better than fish oil is actually krill oil, derived from the shrimp-like animals of the same name.

The debate about whether krill oil is actually better than fish oil is ongoing and hasn't yet been satisfied by research.

Here are the reasons that many people are on the side of the debate which supports going with krill:

Here are the reasons that many people are on the side of the debate which supports sticking with fish oil:

Looking at the above reasons for either side of the debate, what we can see is that krill oil may or may not be healthier for humans than fish oil but that many people think that, until that research has proven the facts one way or the other, it makes more financial and ecological sense to stick with krill.