Start Your Detox Program with a Nourishing, Natural Cleanse

Periodically, the body requires rest periods and to be internally cleansed to avoid the start of states of disease. The elimination organs of the body may become overworked and exhausted. When this happens, other organs that are key to the regulation and production of hormones, fat, toxins, mucin (myxedema), and excess fluids may begin to build up in bodily tissues.

Such a condition may further stress the resources of the body, continually making it harder for the various organs to accomplish their jobs. As the functions of the body become more compromised, the chance to develop chronic diseases, degeneration in general, and organ and immune system failure become more likely. Moreover, it is at this far from optimal state that many people heap even more abuse on their bodies, indulging in unhealthy foods and beverages.

In order to repair such damage to the body, fasting with juice may be just what is needed to allow the body to be cleansed and get the rest it needs. The elimination and digestive processes are taxing on the body. Fortunately, with juice fasts the body has a chance to recover from these bodily activities, while still receiving adequate fluids and nutrition. The nutrition derived from the juice is easily absorbed, allowing the body to begin using these resources to cleanse, maintain tissues, and flush out toxins.

Juice fasts also aid in the regulation of the speed of toxin elimination, as toxins may be excessively present in the liver. Since the excess toxins are released more slowly into the bloodstream, a juice fast may be safer and less uncomfortable than fasting with water, for example. An abundance of vitamins, including C, E, and A are present in fresh juices. Along with living enzymes, selenium, and other phytonutrients, these vitamins bind themselves to the harmful toxins and lead them out of the faster's body.

In as few as one to three days, a completed juice fast may prove beneficial to the organs responsible for elimination and cleanse the body even at the cell level. As a result of completing juice fasts, substances that are stagnant and existing between cells may be removed. Lipofuscin, which is a pigmented marker for free radical-damaged fat and protein, is also reduced during juice fasting. So in addition to feeling better, juice fasts may ultimately make you look better, as they remove the toxins responsible for the production of age and liver spots. 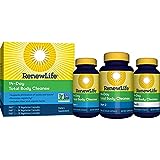