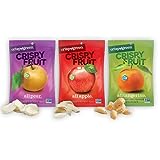 When we are on a diet or are simply trying to eat healthy, we often think that we have to deprive ourselves of foods that we crave or that otherwise taste good. Fortunately, this is not true. In fact, there are numerous foods and snacks out there that our taste buds love and that are great for our figures and our health as well.

Below are ten foods that you will be surprised (and delighted) to know are actually good for us.

You wouldn't think that beef jerky would be on this list, but it is actually a great choice for those who are dieting. Beef jerky doesn't raise your levels of insulin, a hormone that triggers the storage of fat in your body. It is also loaded with protein.

Just make sure that you choose jerky that is low in sodium and that contains all-natural ingredients.

While sour cream contains a high percentage of fat (about half of which is saturated), you will only consume about 52 calories if you eat a few tablespoonfuls, as well as two grams of saturated fat (less than what you would get from drinking a twelve ounce glass of two percent reduced fat milk). The fat in sour cream can also keep you feeling full longer.

Popcorn is both low in calories and high in fiber. In addition, it contains high levels of polyphenols, antioxidants that can help in preventing heart disease and certain types of cancers. However, you should choose to air-pop the kernels (without oil, though) over microwavable popcorn, since the latter contains twice as many calories.

Cocoa is rich in heart-healthy flavonoids, which are also found in green tea and red wine. A recent study showed that eating dark chocolate that contains at least 100 milligrams of flavonoids can relax blood vessels and therefore improve blood flow to your heart.

While coconut does contain unhealthy saturated fat, half of that saturated fat is made up of lauric acid, which boosts HDL (good) cholesterol. Unsweetened shredded coconut is healthiest and can be eaten as a snack, although make sure not to eat too much as it is also high in calories.

Ketchup is not only a tasty condiment with French fries and other various foods; it is healthy for your heart as well. The tomatoes in ketchup contain significent sources of lycopene, an antioxidant that can help protect against heart disease and cancer, as well as premature aging. For maximum benefits, be sure to purchase organic ketchup, as a study that was published in the Journal of Agricultural and Food Chemistry showed that organic ketchup contains up to 60% more lycopene per gram than other rival brands.

Drinking in moderation has been shown to lower the risk of heart disease. In a study conducted by Harvard scientists, it was found that men who drank an average of two drinks each day had a lower risk of heart attack than those who didn't drink or who were heavy drinkers. Even more surprisingly, moderate drinking has also been linked to lower levels of abdominal fat (unlike the belief that consuming alcohol gives you a 'beer belly'). Researchers at the University of Buffalo discovered that men who drank the same amount per day had less belly fat compared to those who drank over four drinks in one sitting but who only did so once or twice every other week.

Pork rinds are packed with protein, and a large percentage of the fat is unsaturated. The majority of that fat comes from oleic acid, the same healthy fat that is found in olive oil. Pork rinds also contain stearic acid, a type of saturated fat that doesn't raise LDL (bad) cholesterol levels.

Low and fat-free salad dressings contain more sugar than full fat dressings, which is used to replace the flavor that is lost from removing the fat. As a result, lower fat dressings can still be packed with calories. In addition, the fat from the dressing actually allows your body to absorb more of the nutrients from the fruits and veggies in your salad.

Cheese Whiz is thought to be an unhealthy replacement for regular cheese, but it actually has a surprising health benefit- it can lower the risk of cancer. While we should generally stay away from trans fats, Cheese Whiz contains a natural trans fat that is actually healthy, known as conjugated linoleic acid (CLA), which has been found to have cancer fighting properties.