Contacts Became Popular in the 1960s

Being fortunate to have been born with near perfect eyesight, glasses were never something that I had to worry about. Other than sun glasses which, like many other people, I wore more for appearance than necessity, I never had to deal with glasses.

As I recall, in my youth glasses were not only expensive but also were still considered to detract from one's looks. Unlike today when glasses are as much a fashion accessory as an aide to sight, people tended to be self conscious wearing glasses.

Then, in the 1960s as I was entering college, contact lenses began to appear on the scene as an alternative to eye glasses. According to WikiPedia the first workable contact lens was produced by a German glassblower named F. E. Miller in 1887 and in the following decades advances in technology led to slow and steady improvement in contacts but it wasn't until the 1960s that the quality improved and price dropped to the point where contacts were ready for the mass market. 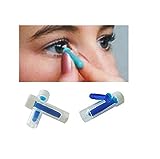 Wearing Contacts in the 1960s Was Difficult and Expensive

Despite the improvement in the lenses and reduction in price, contacts were still both expensive and somewhat cumbersome. Unlike today's soft contact lenses, the lenses of the 1960s were hard, being made of a combination of glass and hard plastic. Among their other disadvantages was the fact that oxygen could not pass through the lens which led to some eye problems and probably limited the length of time one could wear contacts. These contacts also seemed to fall out more frequently than today's models and it was not uncommon to see those who wore them on hands and knees on the floor hollering to bystanders to stay back while they searched for their missing lens.

In addition to the tendency of contacts to fall out and get lost, the contacts of the 1960s were also quite expensive with the result that, like today's cell phones, those who wore them, and especially parents of children who wore them, frequently purchased the insurance that opticians sold along with the contacts.

In spite of their cost and other problems, many who wore glasses in the 1960s eagerly switched to contacts for appearance sake if not for convenience.

Other than being thankful that I didn't need any type of eye wear, I didn't pay much attention to all this except wondering how anyone could deliberately stick something into their eyes. I cringed at the thought of anything touching my eyes. I still remember dating a girl in college who wore contacts and having to get on my hands and knees to help her search for a contact that fell out of her eye. However, I turned my head and looked away when she put her finger in her eye to replace it.

Even good eyesight tends to deteriorate somewhat with age and as I got into my forties I started finding it increasingly difficult to focus on the print in books, newspapers and computer screens as well as starting to find it difficult to read road signs from a block away. So I finally gave in and got some prescription reading glasses which were fine for reading but cumbersome for teaching as I had to keep putting them on to see my notes clearly but taking them off to see the students when I looked up. I finally gave in and brought bi-focals which solved both my near and distant sight problems while keeping the reading glasses for reading books and working on the computer.

Despite the urging of my eye doctor that I simply wear the bi-focals all the time I refused, partly out of vanity and partly out of a refusal to surrender and become dependent upon the glasses. I also did not like the way they tended to slip down my nose as well as when I moved my eyes to the right or left or up or down and having my vision split or blocked by the frames and edge of the glasses.

Not wearing the glasses all the time meant that I had to carry them with me and keep pulling them out to put them on. In addition to wearing out the glass cases from frequent use this also meant that I was limited to wearing shirts with a left breast pocket. This was generally not a problem with dress shirts but all but eliminated my wearing T shirts and polo shirts as most are made without a pocket.

I Was a Slow Learner in Contact Lens Class

I considered contacts but still couldn't bring myself to deliberately put something into my eyes and also felt that it would be impossible to have a bi-focal lens made. Then my step daughter decided that she wanted to get contacts. Now my son had had contacts before I started wearing glasses however, he has done other crazy things so I never considered following his example. However, my step daughter tends to think more like me and I began thinking that if she could do this I might be able to do it as well. When she informed me that the eye doctor at Costco which we both went to included training in how to put contacts in and take them out I was even more intrigued.

Having seen how quickly my step daughter learned how to put the lenses into her eyes and remove them despite sharing the same apprehension as me about putting something in her eyes, I decided I had to check this out.So, when I went for my annual eye exam I inquired about contacts and was told that I could get them despite my having to use bi-focals.

I don't know what other doctors do but with my eye doctor the training is not a nice extra, it is mandatory. In fact patients don't get to take their contacts home until they successfully demonstrate that they can put them in and take them out successfully. My wife, who had worn hard contact years ago before I met her, decided to get contacts the same time as I did and she successfully mastered the one hour training in about thirty minutes. I, on the other hand, not only took the full hour but had to come back for three more, hour long, practice sessions before I finally mastered the process of putting them in and taking them out.

Even after successfully graduating from contact lens school, I still had problems and had to add an extra thirty minutes to my morning and evening routines as at first it usually took me 20 to 30 minutes to put my contacts in in the morning and take them out in the evening. In addition to losing a few outright, I also ended up tearing two or three taking them out - on one occasion I tore it while it was still in my eye and ended up going to bed with one third of a contact still in my eye. There were no ill effects and I was able to get it out the next morning. However, I ended up going through my first six month supply of lenses in about two and a half months.

I am now in my second year using contacts and love them. In fact my sister was so impressed with my getting contact lenses that she now wears contacts as well. I can now get them in an out within a couple of minutes and am getting the full month's wear out of each pair of lenses. In fact I have gotten so good at putting the contacts in that sometimes it is difficult to tell whether I actually put the lens in my eye or dropped it. Because it does sometimes fall off my finger, after I put a lens in one eye I close the other eye and look at the writing on one of the containers on the bathroom sink. If the writing is clear, the contact is in and if not I know I have dropped it.