Life is Suffering However Can be Eliminated

Maslow claimed that we as human beings need to deal with his theory of "unavoidable suffering." He believed that to live is to suffer. In Buddhism, it claims that we can achieve enlightenment and live out our days in a state of nirvana. Based on my twenty-year research I believe that the wisdom traditions of the East and West provided us with a spiritual solution to end our suffering. I argue that not knowing where we came from, who we really are, and where we are going are the root cause of pain and suffering.

Knowing is Half the Battle

Scripture, Science, and the Tripitaka

Where did we come from and where are we going? Studying the wisdom traditions of the world I noticed that much reference is made to the light. In scripture Matthew 5:14-16 it says "You are the light of the world" and ends with "let your light shine before others." In the book of Genesis God said: "let the there be light and there be light." Everything we see and all of our thoughts come from the light. We are its children. The light that came into existence on its own accord without a source due to the sun and moon not being created until the third day. In Buddhism it states that God Almighty (Brahman) resides within all humans as Light, a fact that is supported by all scriptures, thus we can meditate on Him within and that long search for Creator is at last over ending within ourselves.

Albert Einstein concluded that we are all "slowed down sound waves and light." Einstein discovered that light is capable of thought because it makes its own decisions in how it behaves. It has the ability to think for itself he concluded after spending years studying photons and the things that make its composition. Knowing where we come from and where we are going is very freeing and will minimize suffering. By providing us with two solutions to the eternal questions that have been debated ever since civilization began.

Thoughts Move at the Speed of Light

So now to the third eternal question which has been that can only be answered until we pass. Who are we really? In my studies, I found the answer that made the most sense to me based on the thing that ties all things in existence together. The universe.

We are all the universe having a human experience. Simply put, we are the universe manifesting itself in a living organism and becoming self-aware. To me enlightenment is being healed and becoming whole again. This is hard to do in my opinion if you do not have a real understanding of where you came from, where you are going, and who you truly are.

Having an understanding of the who, what, and the where is essential and could very well eliminate existential depression for the millions of people who have no idea where to go to relieve the pain. Once we know where our departure started, our arrival destination, and have self-knowledge we get one step closer to self-realization and will separate us from those who wander in the dark. Unavoidable suffering can be avoided by turning to the light for only it alone is real.

The Face of Mind-Body Science on Discovering Your True Self 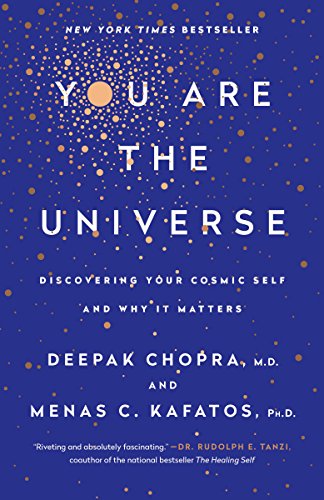 You Are the Universe: Discovering Your Cosmic Self and Why It Matters
Buy Now

A Good Read About Self-Knowledge to Empower You

Ego Is the Enemy
Buy Now