Out of the blue my lower back started to throb and ache. This was so strange because I hadn't injured myself or been sick in any way. The pain continued to get worse and I found myself walking bent over to help relieve it. I knew it was about time I went to see a doctor.

The first doctor I went to barely examined me, asked a few questions and then he said, "You should try to live with the pain." What? Are you kidding me? What kind of diagnosis/treatment is that? I left his office stunned and searched for another doctor as soon as I got home.

The second doctor wasn't any better she told me, "Maybe you don't want to know what's wrong with you." The reason I went to the doctor was to find out what was wrong with my back. I thought doctors were supposed to at least try to figure out why their patients were in pain or had an ailment. Apparently these two doctors missed a few courses in all the years they spent in school. I call them, pay check doctors because they see patients, do nothing for them and collect a pay check for it.

My back reminded me I needed an answer as to why I was in so much pain so I searched for a third doctor. I was beginning to feel like I was on the game show, "Lets’ Make a Deal" where I kept picking the wrong door ending up getting the "ZONK" or in this case choosing one lousy doctor after another.

The third doctor I go to is a surgeon who actually listened to my concerns and decided to do an exploratory Laparoscopic surgery.

This surgery revealed that my ureter that funnels urine from my right kidney into my bladder was extremely swollen. Concerned about this my surgeon referred me to another surgeon for further examination.

Onto another doctor and another battery of tests specifically related to my kidneys. These tests confirmed that something was seriously wrong with my right kidney.

My forth doctor without even looking at me blurts out in a matter of fact way that, "Your right kidney is non-functioning." What? How did that happen? I just couldn't figure how that was even possible. I've never had a bladder or kidney infection or injury of any kind related to my kidneys.

It was soon discovered after a few more tests why my kidney no longer worked. Three staples were clamped on my ureter cutting off the flow of urine to my bladder which explained why my ureter was swollen.

The doctor determined this must have happened eleven years earlier during the C-Section surgery when my daughter was born. The C-Section surgery the surgeon was referring to had been a mess from start to finish. While on the operating table I was given one pint of plasma and eight pints of blood. I was in ICU several days and nights with a touch and go chance of surviving. I was also discouraged from having any more children because it would be too risky.

When this possible medical malpractice issue showed up years later I was told I had one year after discovery to file a law suit. I did and was told I had no case according to the medical records available. I was disappointed, but happy to have survived the whole ordeal. I just hated the idea of other women going through what I had due to a surgeon who shouldn't have been in an operating room.

It was a shot in the dark but a few more kidney function tests were done to confirm that my right kidney would never function again. A normal kidney is about 4 inches long and 3 inches wide. Mine was fluid-filled making it three times its original size.

What was behind door number #5? A hot shot young surgeon was taking my case now and he was excited at the prospect of doing major surgery to remove my kidney. He was convinced it needed to come out right away saying, "I've never seen anything like this before, and the fluid in your kidney is TOXIC! In addition he told me, "It has to come out right away because it's a TICKING TIME BOMB!"

I was not about to hop on the crazy train he was offering rides on. The last thing I wanted to do was have this overzealous doctor remove my kidney. He struck me as the type of doctor to display my bloated kidney in a large pickle jar strategically placed on his book shelf where it wouldn't be missed by anyone who entered his office. A conversation starter among colleagues, a trophy of sorts, meant to impress. Thanks, but no thanks!

To MAYO or BUST!

Onto door #6, for yet another opinion with hopes it would be the last. My family and I headed to Mayo Clinic in Rochester, MN to see what the doctors there thought about my removing my non-functioning right kidney. I figured if I'd lived with it for eleven years it probably wasn't going to explode in the next few weeks as doctor #5 tried to convince me of.

The first thing the doctors at Mayo told me after running a few more tests was that unfortunately they've seen this kind of thing before in other patients. They reassured me that the fluid in my kidney was not toxic, and probably more like a saline solution. If it were to burst the fluid would dissipate and be absorbed by my body. They also told me that the "ticking time bomb" was in fact a DUD!

Having kidney surgery was not recommended due to the size of my kidney and scar tissue from my prior C-section surgery. The potential for surgical complications and post surgery infections would've been too great.

Surgical removal of my kidney would have entailed breaking at least two of my ribs, and cutting me from the front to my back to remove my enlarged kidney. Recovery from such an invasive surgery would have taken months. The Mayo surgeons assured me that my kidney was fine to stay right where it was. I am so grateful they saved me from a needless surgery that would've only caused me more pain and suffering.

Lessons learned from this experience:

♥﻿ Get more than one opinion if a doctor says something that doesn't sound right.

♥ ﻿ Doctors that treat me with disrespect, and could care less about my health and well being do not deserve my time or money.

♥ Avoid doctors that try to scare you into having invasive surgical procedures because they lack the experience and knowledge to look at the big picture.

♥ ﻿ Have a family member or friend attend discussions about diagnosis and treatment plans. Then compare notes and discuss how to proceed.

What about the back pain that started this whole journey? Well, something interesting happened. My back pain went completely away the way it had started without warning. It's been ten years since discovering the problem with my kidney and I have not had any back pain since I left Mayo Clinic.

Strange as it may seem I think the back pain I experienced was my body’s way of telling me that something was wrong. The pain did not stop until I had an answer and a resolution to the problem. I may not have won the malpractice law suit, but I gained something even better. A secret truth hidden for years that an incompetent doctor thought I would never find within my own body. 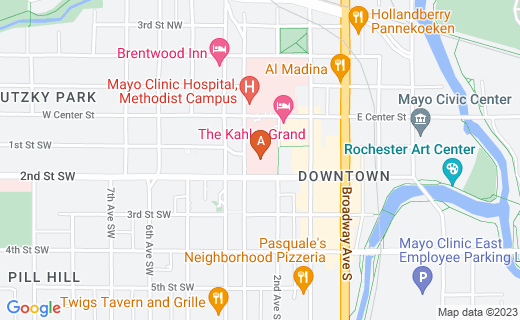