My Baby Was Born With A Cleft Palate

The Birth Of My Daughter

When I was 29 years old, I gave birth to my first child. I had toxemia in the last month of my last trimester, with ankle swelling and hypertension. I was instructed to lie down on my left side always with no activity issued except toileting, bathing and going to the doctor. My pregnancy was full term and two days prior to the date, the doctors on the Obstetrics team decided to induce my labor.

They also planned doing a Caeserian section should I have difficulties. I was scheduled to come in on a Wednesday for induction of labor with IV Pitocin. When I arrived, the Obstetrics Ward was overcrowded with women on stretchers in all the hallways, and no labor rooms were available. I sat in an office next to the labor ward for over an hour, with my blood pressure sky high, they actually told me to go home and wait till the afternoon. Of course I was upset. I did what was instructed, but was going to call them as soon as I got home.

I finally did go back to the hospital. The process of inducing my labor with IV Pitocin took 30 hours! I never thought I would have to wait that long to have a baby. The Caesarian section that was to be done was cancelled. The obstetrician of my choice was on military duty away, and the on call doctor had many other babies to deliver. The doctor that was available to deliver my baby couldn't stop telling everyone he was ready to go on vacation.

On the night before my daughter's delivery, I was able to sleep in a regular hospital bed. I could feel the contractions even though the doctor slowed down my labor process. At 6:30am on that Friday in June they brought me back to the labor and delivery room and started the process again. This time, my water broke and I was ten centimeters and fully effaced by 1:30pm. Time to have this baby!

I wish I could remember the name of that kind and patient nurse who coached my every push.

Finally, at 4:24pm of that day, my daughter was born! I knew my baby was a girl for nine months. She cried to the top of her lungs when she came into this environment, and she put her hand in my mouth when I held her. But something was wrong. I never had heard a newborn with such a big trachea for air to do all that screaming.

I needed special feeding bottles with enlarged nipple holes to feed her while holding her upright. She had numerous checkups to make sure she gained weight, that she was infection free, and did not aspirate while feeding and learning to eat.

When my little girl was at the age of 9 months and 5 days, the operation took place. They did a Flap procedure inside her tiny mouth to close it up and then stitched it.

I stayed with her as she intolerably slept and was fed in an oxygen tent for two nights. I prayed and never slept until the third day in the hospital. That day, the tent was removed and she was ready to play! When the surgeon saw how she smiled and jumped up and down in the crib he dismissed her from the hospital. The following two weeks were a challenge as her mouth began to heal. "Nono" splints on the baby's arms, and having to feed her pureed cereal and formula through a syringe were challenges to face. Allergies to antihistamines added to the other problems.

At the two week follow up she was given a great report that her mouth was healing well. There was a concern with fluid building up in her ears, but that was dealt with as she got older. "When can she go back to her baby bottle?" I asked. The okay was given right away. But she never wanted it! I actually found a sippy cup that was small enough for her hand, and at less than ten months, she was weaned from the bottle forever.

Now my daughter is a young adult, and with no recollection of this experience, except the scar in her mouth and a double uvula in her throat (surgically-created). She is very healthy and beautiful. 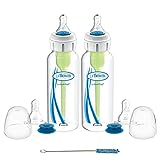