Sciatica: The worst pain of my life

Several months ago, I was diagnosed with sciatica due to a disc herniation at L1-S5 and let me tell you - it was the most intense and excruciating pain I've ever experienced, almost beyond words. I was in so much pain that I thought I might never feel better again.

Thankfully now, even though the pain and numbness from my sciatica hasn't completely gone away, it's something that doesn't rule my life and I'm not constantly aware of it. I had to develop my own sciatica management plan to get here though - some combination of treatments and "doing nothing" that worked for me. So yes, the good news is that sciatica relief really is possible.

What caused your sciatica? Can you really know?

I've done a lot of reading about this and understand now that there are many things that can lead to sciatica. Most of the time though, it is impossible to point to one specific cause and one might have to do a bit of searching and a lot of assuming to put the pieces together. If you're suffering from sciatica, accepting that you might never know for sure what exactly caused your pain is something I strongly recommend that you do.

Becoming too philosophical - "why me? why did this happen to me?" is a normal process to go through and it's understandable but if you get stuck here in this way of thinking, you won't be able to focus on getting better.

Having said that, I've done a bit of soul searching and these are what I believe to be the causes of my sciatica:

I had some warning signs

I don't know about you, but before my sciatica due to disc herniation occurred, I was experiencing bad lower back pain for almost a year. It started out that I "just wasn't feeling right" - I knew something was off. It was like no matter what position I was in, I just couldn't get straight enough. I remember driving my car and constantly trying to sit up straighter. This became a bit of an obsession for me - I really had to think about the way I was going to sit and just generally conduct myself physically. Sitting and moving around, something I took for granted before, was something that I now had to put a lot of conscious thought into.

Because I knew that things weren't right, I went to my doctor, had an x-ray and it showed nothing (I later discovered that x-rays do not very easily show most back problems anyway). But I started going to physiotherapy, saw the chiropractor a few times and went for a few massages. I wasn't feeling great, but it seemed to help some and then...

I was having bad and then severe pain in my buttocks. I wasn't really sure what was happening but just figured that my lower back was acting up again and that eventually it would go away. But over the course of a few days, my butt (and by then hamstring) pain became excruciating to the point where I had to call in sick from work one day. All I could do was literally stay in bed, but I still thought it would go away.

When I tried to get out of bed and realized that I was in so much pain I could hardly stand it, I called my mom over to my house to take me to the hospital. She tried to help me get into the car but by that point, my butt pain was so bad that I literally could not sit down! I did not think I was going to be able to get into the car and tried to throw myself in backwards into the back seat. I didn't know what was going on!

Somehow I managed to get myself into the car, and my move drove me to the emergency department at the hospital! Eventually (a few hours later) I was seen and the doctor diagnosed me with sciatica on my left side based on my inability to raise my leg more than a few inches. A few days later, I had a CT scan and it confirmed that I had disc herniation at L1-S5. The doctor put me off work for a few and prescribed three kinds of strong painkillers that I had to take around the clock along with alternating cold and heat.

So I stayed away from work for a week, took 3 strong painkillers and stayed in bed for the first few days because that was all I could do. After that, I tried to move around as much as I could (it wasn't much) so that I wouldn't "seize up."

Again, I went back to physiotherapy and this time got some different exercises for sciatica to do at home.

My favorite exercises for sciatica relief that my physiotherapist showed me

Hands down, my personal opinion is that yoga is probably one of the best methods for sciatica relief and should definitely be incorporated into your overall sciatica management plan. I ended up joining a yoga class for a while after I felt more comfortable, but I started out just doing videos at home. My favorite yoga DVDS by far is the Namaste: Ultimate Yoga Experience Series. I've shown the link here to the right. It's actually not that pricey considering it's a series that comes with 3 discs. I've tried many videos and this is definitely my favorite - something I keep going back to while others still sit on my shelf collecting dust.

The gentle movements of yoga have been really helpful for my back. Another benefit is that they really help with stress reduction and let's face it, going through sciatica is very stressful!

Viniyoga Therapy for the Low Back, Sacrum & Hips with Gary Kraftsow
Buy Now

Physiotherapy and the Chiropractor for Sciatica Relief

When I first experienced my excruciating bout with sciatica, I tried both physiotherapy and a few chiropractors. I feel that I probably got some sciatica relief but honestly, my results were less than expected. It's certainly worth a try though, and I do appreciate the exercises that I learned in physio targetted to helping sciatic pain (the two exercises that I showed above).

I've tried a bit of acupuncture in my time too, and I'm not convinced that it necessarily does a lot but it might offer some temporary sciatic relief and in the initial stages of this excruciating pain, you'll take what you can get I'm sure.

One thing my physiotherapist did that I found helped was put tape on my back in the form of an X. At first I didn't understand the point of this but when you move in the wrong way (ex. bending forward at the waist), you'll get a gentle pull from the tape which is a feedback reminder to you to improve your posture. This is one thing that I wish I could do myself at home because it is actually helpful!

Oh yeah, at phyio I discovered that it's really important to work on your core strength. If your abs are not strong (mine weren't and still aren't!), they can't do a good job supporting your back. You can start with making a conscious effort to keep your abdominal muscles tight throughout the day - "engage your core muscles" is what my therapist called it. This is an easy thing to do and doesn't involve sit ups! I found that it helped me. 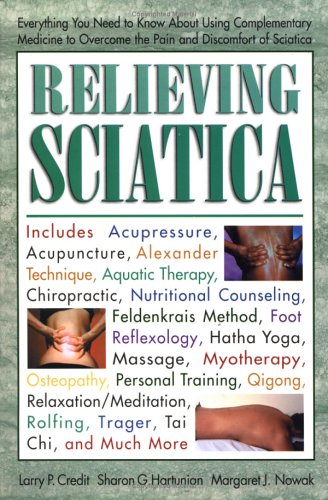 Relieving Sciatica: Everything You Need to Know about Using Complementary Medicine
Buy Now

Massage can be another wonderful part of your sciatica management because even though it might not "cure you", it feels good in the moment. I'm not sure about you, but having sciatica caused me to become rather depressed and massage can help with that aspect of it. When you're depressed, your body can't physically heal itself as well as when you're not.

This is the exact back support model that I have. Love it!! 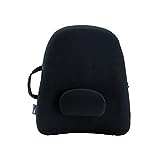 Back Support for Sciatica Relief

For a while, I couldn't figure out how to sit comfortably. Every chair I sat on seemed too soft and I really needed support so I bought an Obus Forme. At first I took it everywhere with me but now I just leave it in my car for support while I'm driving. I love it, it's so comfortable! The exact model that I bought is on your right.

Alternating hot and cold therapy is one of the things that made me feel good when my sciatica was at its worst. I would often sit with a cold pack at work because it helped to numb my pain. In the evenings and in bed at night, I'd take a hot pack with me because it was soothing and helped me to relax and sleep. It can be tricky finding a hot or cold pack that is large enough to cover the area you need covered!

While I'm not a doctor, my personal experience is that simply just giving yourself time to heal is an important part of your sciatica management. You will not get better overnight! You're certainly not alone on this! Since my bout with sciatica, I have had so many conversations with people who have gone through the same thing. Everyone I've spoken to is doing fine but all of them still have issues with pain and/or numbness to some degree. It may be something that to some extent you'll have to live with for the rest of your life - this is the view that I have adopted for myself.

Just consider that while sciatica management is probably something you'll have to always practice, that sciatica doesn't have to take over your life! Like I said, I have not gotten all better (yet) but I have improved enough that it does not rule my life and I have indeed found ways to enjoy sciatica relief. Good luck!!

SACRO WEDGY - The Back Aid Sacro Stabilizer - FEMALE VERSION - Helps Releive Back Pain
When nothing else works, try one of these to help gradually reduce your sciatica pain.
Buy Now

Sacro Wedgy - Sacro Wedgy - Male Version - A12941 01
When nothing else works, try one of these to help to gradually reduce your sciatica pain.
Buy Now