In the 2010s, we approached a medical milestone featured in science fiction films. This miracle is that of a doctor giving a terminally ill patient a pill that regrows her kidneys in less than one day.

One Central Ohio partnership offered stepping stones to that future through regenerative medicine that uses 3D printing and practical application of a virus.

The stem cells then grew into the organ needed by the patient, whether that patient was a cancer survivor, accident victim, person born without an organ or with an underdeveloped organ, or some other.

Another solution to some cancers is a herpes virus related to cold sores. Nationwide Children's Hospital receives large grants for use in developing and testing such virus treatments and creates success and longer lives in doing so.

Nanofibers, a virus, and two hospitals are beating cancer.

Construction scaffolding holds workers and materials in place as it stands close to a building project.This concept can be used in medicine as well.

Bioengineered scaffolding supports stem cells as they grow into a new organ.

At that point, the scaffolding can disintegrate and disappear, if that option were chosen. A similar process has been used in surgeries for some time, involving stitches and calcium-based bone-holding screws that dissolve.

Bioengineered scaffolding supports stem cells as they grow into a new organ.

Previously, circa 2011, a senior citizen in his early 70s received a new esophagus made from powdered pig bladder and intestine that had grown around a matrix formed around his cancerous organ. The sugery and the operation of the new esophagus were successful.

As for the trachea,in 2003, reports stated that American doctor Eric M. Genden transplanted an organ formed from the use of cartilage from a donor combined with body tissue from his patient. For this, he received a nomination for a Marcus Prize in Medicine*. He also received the Best Clinical Innovations Award in 2003 from The Academy of Osseointegration and Educator of the Year recognition by Mt. Sinai School of Medicine in NYC, among other awards.

Later, a donor transplant of the complete organ was first done for a woman from the country of Columbia in 2008. In 2011, an artificial trachea was placed surgically for a man from Eritrea at a Swedish hospital.

Nanofiber Solutions offers a trachea grown from a patient's own stem cells, eliminating the possibility of transplant rejection, while decreasing the amount of overall recovery time required. Dr. Jed Johnson of The Ohio State University is Chief Technologic Officer (CTO) and colleague Dr. John Lannutti Is Chief Science Officer. Both physicians have long histories of successful research at OSU.

*It is unclear whether this is the Florence Marcus or the Melvin Marcus Prize, both having medical categories. However, the latter is closely related to cardiovascular health that includes the trachea. In addition, this is the Dr. Genden that performed the first jaw implant in 2006. Head and Neck Surgery is full of medical advances.

Nanofibers In Medicine and Treatment

The nanofibers used by Ross Kayuha's Columbus company would equal the diameter of a human hair if 200 of these nanofibers were put together.

In 2012, the company was able to build two larynx-trachea combinations for two patients each in Sweden and Russia, designed to be the size that the individual bodies required. By the end of 2013, the new organs were still operating effectively.

Such applications of nanofibers and related materials, drug delivery systems, etc. has given rise to the field of medicine called Nanomedicine. Scientists in this field are conducting important research in such subjects and neural therapies in brain injury. The National Institutes of Health engaged in a 10-year plan beginning in 2005 to initiate new Nanomedical Centers in the USA. By the end of 2013 eight centers were established. The Medical Centers of Excellence program has been expanded to include Nanomedicine Centers.

Electrospinning pulls the nanofibers from a liquid base via the use of a needle/spinneret, much in the same manner as a spider weaves webbing material, providing material for many biomedical applications, according to the NIH at www.ncbi.nlm.nih.gov/pubmed/19076051. For Nanofiber Solutions, that application is growing the human trachea and other internal organs.

The nanofibers can be immediately biodegradable, or they can be built to last for a longer time period.

The next project for Kayuha, et.al. is one in which new intestines will be grown for children at Nationwide Children's Hospital in Columbus, under Dr. Gail Bresner. She and Kayuha's group recieved an Ohio Third Frontier Grant for the research and development.

Ross Kayuha is happy to offer a variety of scaffolds to pediatric and adult patients. In fact, he and his team of OSU and other professionals can build them to the classifications of the surgeon. These scaffolds can be degradable, nondegradable, soft and pliable, stiff and strong, elastic or not, or anything in between those points.

Children's Hospital in Columbus, Ohio advertises itself as the largest and most comprehensive pediatric hospital/research institute in America.

This hospital, backed by Nationwide Insurance company, is fortunate to have in its employ Dr. Timothy Cripe, chief of Hematology, Oncology and Bone Marrow Transplants. he wants to kill cancer cells with a herpes virus. To date, he reports that his team can use the virus to kill cancer cells without causing the virus's disease as a side effect in animal trials in 2013.

Additional top hospitals, including the Mayo Clinic, are researching the effects of other viruses on specific cancers.

The partnerships among these institutions and private companies like Nanofiber Solutions and Nationwide Insurance are miraculous. 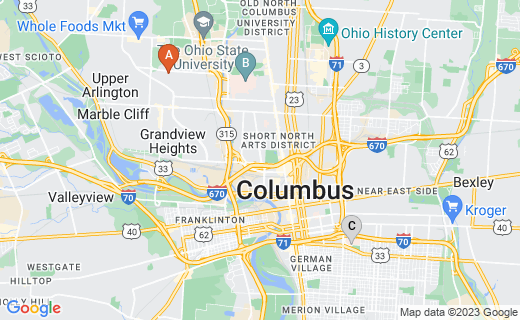