Sadly, I have experience with cancer patients and depression as both my grandma and my dad have had cancer.

My dad was diagnosed with pancreatic cancer in December right before Christmas. He was told by two different doctors that it was in the advanced stages and that while chemo was an option, it would only prolong his life for about months rather than cure him. His other option was to get surgery. The surgical procedure was called a Whipple procedure, which was a rigorous, risky procedure. It took him two weeks to decide whether to have the procedure. He withdrew from friends, family, and started missing a few days of work. He decided to have the procedure, and that sent him on a long journey of preparing for his death. He was convinced he was not going to make it through the surgery.

He came through the surgery after 11 hours on the operating table, and was feeling great two days after the surgery when he hemorrhaged and coded. The doctors were able to revive him, but he received CPR for 15 minutes, so when he was revived, he had extensive brain damage. One doctor even used the term brain dead.

He was so depressed before his surgery, I feel like a part of him died the day he found out he had cancer. Don't take any day for granted. If you or a loved one has cancer, stay positive, but also realize the reality of it and from that do what you can while they are still here. I wish I would have found my dad someone to talk to in those last months. No one should have to go through this alone, and I regret not doing something to help his depression. He was not only crippled by the cancer, but also let himself go and stopped fighting because of the news he had gotten about his cancer.

Fighting is always an option!

A gift could lift their spirits! My grandma had cancer too, and she was ALWAYS cold! 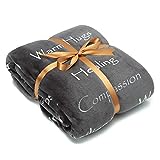 One out of every four people who are diagnosed with cancer has clinical depression (American Cancer Society, 2013). Depression is defined as a “psychoneurotic or psychotic disorder marked especially by sadness, inactivity, difficulty in thinking and concentration, a significant increase or decrease in appetite and time spent sleeping, feelings of dejection and hopelessness, and sometimes suicidal tendencies” (Merriam-Webster, 2014). In the paragraphs below, psychological theory is discussed in order to describe the source of depression in cancer patients, to examine its effectiveness in enabling the patient to deal with the depression, and to determine whether psychological theory can solve the issue.

Where does the depression come from? It is common for cancer patients to become depressed after first hearing of their diagnosis. Some cognitive behaviorists believe that the cause of this is a result of certain personality traits that an individual possesses (Nemade, R., Reiss, N., and Dombeck, M, 2007). For instance, people with depressive personality traits such as gloominess, introversion, and neuroticism have a greater chance of experiencing depression (Nemade, R., Reiss, N., and Dombeck, M, 2007). Another factor that can lead to depression is a negative attitude. “Individuals who tend to view the causes of negative events as internal, global, and stable are said to have a pessimistic attributional style” (Nemade, R., Reiss, N., and Dombeck, M, 2007, p. 6). Depression is more likely to develop in people with a pessimistic attitude.

Martin Seligman, an American Psychologist, developed a theory called learned helplessness. A modification of Seligman’s learned helplessness theory is a learned hopelessness theory. This theory believes that depression is the result of negative thinking. When people think negatively they “blame themselves for negative life events, view the causes of those events as permanent, and overgeneralize specific weaknesses to many areas of their life” (Nemade, R., Reiss, N., and Dombeck, M, 2007, p. 7). When talking about cancer patients, they may become depressed because they blame themselves for their diagnosis and see the diagnosis as a permanent ruination (Nemade, R., Reiss, N., and Dombeck, M, 2007).

So Much To Do, So Little Time

Cancer is a serious disease, and when a person learns he has cancer it is going to have a large effect on his life. After first learning of the diagnosis, many thoughts are going to pour into his mind, but it is how those thoughts are processed that matters. For instance, the obvious thought would be how much time he has left and how that time is going to be spent trying to fight cancer. Then, he would also have to deal with insurance, financial resources, telling those close to them, work schedules, etc. (Framingham, 2006). Through all that, it would be easy for a patient to get down and let his mind wander into a negative place. This is when depression sets in. Psychological methods focus on getting patient’s minds back to a happy, positive place where they have learned to deal with their issues and face the problem head on.

Are you or a loved one suffering from cancer?

There are a few options for solving depression in cancer patients. Different treatment options are available. An example of one is cognitive-behavioral therapy. It was “found that a brief cognitive-behavioral therapy was effective in treating depressed cancer patients at a medical care setting, and these gains remained at the three-month follow-up” (Tartakovsky, 2012, p. 9). Cognitive therapy is “psychotherapy especially for depression that emphasizes the substitution of desirable patterns of thinking for maladaptive or faulty ones” (Merriam-Webster, 2014).

A more specific cognitive-behavioral therapy that has proved to be effective is one that emphasizes behavioral activation. Behavioral activation is not as complicated as many other intervention methods for depression. It focuses on an individual being healthy and happy without any depression. It also emphasizes having control of one’s life. The reason this is good for cancer patients is that when an individual is diagnosed, they often feel like they have no control over life or the outcome that their diagnosis will bring (Heimberg, 2008).

Psychological interventions for cancer patients have included “psychoeducation, supportive therapy, cognitive therapy, relaxation training, problem-solving and social skills training, biofeedback, and hypnosis” (Heimberg, 2008, p. 127). There are many cases where these interventions were known to reduce the depression symptoms a great deal, but there are also a few cases where they did not have much impact (Heimberg, 2008).

Cognitive therapy deals with thought stopping, positive self-statements, and training the mind to get rid of negative thoughts. In relaxation training, the patient is to focus on breathing and postural relaxation. The idea is that the patient’s breathing can be retrained. The idea behind problem solving is that once given situations to think about and solve, patients would be better able to look at their personal situation in a different light (Heimberg, 2008).

A trial for an integrated approach to treating depression in cancer patients was completed in 2008 and the results of the study were promising. The approach had three focuses, and those were screening for depression, using antidepressants as part of treatment, and helping patients with problem solving skills. Two hundred patients with different types of cancer participated. Seventy-one percent of the patients were female and the mean age of participants was 56. 6. One hundred and one patients participated in usual treatment for cancer along with the depression program, which was held by trained nurses. Ninety-nine patients underwent only normal treatment for cancer. After reviewing the positive results of the trial, the lead researcher, Sharpe, commented that “"this shows that treating depression can work well when it's part and parcel of a patient's cancer care” (Sharpe, 2008, p. 8). This study shows that when treatment for depression goes hand in hand with cancer treatment the results are favorable and long-lasting (Sharpe, 2008).

After diagnosed with cancer, it is common for many patients to develop depression. Psychological theory, however, can help the cancer patient when it comes to being depressed. On top of personality traits effecting how individuals respond to being diagnosed with cancer, the learned hopelessness theory is one psychological approach that can be used to describe why it is that cancer patients experience depression. Psychotherapy can be used to discuss the effectiveness of enabling a patient to deal with the depression. Lastly, the cognitive-behavioral approach can be used to solve the depression with different treatment options. In all, though depression in cancer patients is a serious issue, patients are not hopeless. There is treatment out there that can help the patient to recover from depression and prevent relapse from occurring. 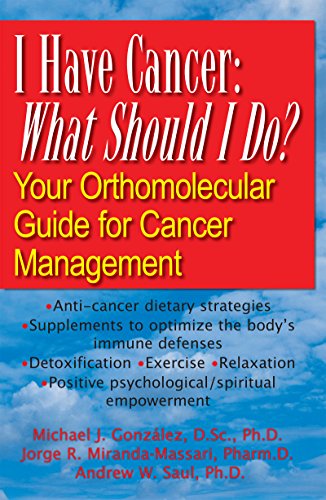 I Have Cancer: What Should I Do?: Your Orthomolecular Guide for Cancer Management
Buy Now