I have the low carb meals thing down. It’s easy – meat, poultry, or fish with non-starchy vegetables. Got it. When I first began using low carb diets, I had a problem with snacks. Now I’m not really a big snacker, but I do enjoy munching on something when I watch a TV show or movie. When those snack attacks hit me, I’m much more likely to crave something salty than I am to crave something sweet. Before I was worried about carbs, the salty snacks were often in the form of potato chips, cheese curls, popcorn, or crackers. Obviously, if I wanted to do the low carb snacks thing, I was going to have to find some substitutes for the high carb foods. I turned to pork rinds, peanuts, sunflower seeds, almonds, pecans, walnuts, beef jerky, and raw veggies and dip. Yes, I realize all of these don’t qualify as healthy choices. What I really needed were some high protein low carb snacks that would keep me full and satisfied. The veggies and pork rinds were out, and the nuts and seeds were in. I recently added a new member to the group – pumpkin seeds. Sure, I’ve eaten them before, and I’ve roasted my own, but that’s a lot of trouble. I found out that I could buy roasted pumpkin seeds in bulk at a reasonable price.

You might remember pumpkin seeds from your childhood. You know – after carving your Halloween jack-o-lantern, your mom scooped out the seeds and roasted them in the oven. You probably remember how yummy the seeds were, and you might also recall how dang hard they were to eat. The entire seed isn’t edible – only the kernel inside the hard seed covering is edible. It’s much easier to buy pumpkin seeds that are already roasted and shelled. I prefer the salted version, but you can also find them unsalted.

I guess the first time I saw shelled and roasted pumpkin seeds on the commercial market, they were included in a bag of mixed nuts and were called “pepitas.” I wondered what the tasty little kernels were, and the only items listed on the ingredients label that I didn’t recognize were pepitas. I was pretty sure they were pumpkin seeds, and I was right. The internet is my friend.

How can you use pumpkin seeds? Well, as you already know, I use the roasted seeds as low carb snacks. I also add them to green salads, and they provide some interesting texture. I’ve used them in some of my other low carb recipes, including low carb bread. They’re great in my low carb crackers recipe, too. they’re even tasty mixed with veggie dips. I’m thinking of grinding the seeds into a paste or butter to eat with bread and toast. I’m sure I’ll be coming up with more pumpkin seed recipes!

Pumpkin seeds nutrition is pretty impressive. An ounce has less than 4 grams of carbohydrates, and more than a gram of that is indigestible fiber. The net carb count is 2.7 grams per ounce, according to one source I found. The nutritional information posted with the last pumpkin seeds I purchased, however, displayed different information. According to that information, a serving had just one gram of net carbs. Another popular website states that a one-ounce serving has 2 net carbs.

What about vitamins, minerals, and other healthy stuff? As I’ve already stated, the seeds contain dietary fiber. They’re also a good source for zinc, vitamin E, iron, copper, phosphorus, magnesium, and manganese. One of the most exciting things about pumpkin seeds nutrition is the range of antioxidants they deliver. They have several different types of vitamin E, along with lignans and phenolic acids. The seeds also contain cucurbitin, an amino acid that can kill internal parasites.

Have you heard about pumpkin seed oil? It’s been used for years in Austria, Romania, Slovenia, Hungary, and Croatia. It’s made from the seeds of a special type of pumpkin grown in the area, the Styrian oil pumpkin. The seeds are harvested, cleaned, roasted, and shelled. Then they’re pressed in order to extract the oil.

Pumpkin seed oil is often used in salad dressings, and it gives ice creams a nutty flavor. The oil is also used in soups and yogurts and as a dipping oil for breads. Chefs use it as a finishing oil for vegetables and poultry. It’s not suitable for cooking, however, as it becomes bitter when exposed to high temperatures. Besides culinary uses, the oil is sometimes used in cosmetics.

For the most part, Americans have just recently caught onto the advantages of using the oil in the kitchen. The United States is also catching onto pumpkin seed oil benefits, which are numerous. Want to buy pumpkin seed oil? I haven’t been able to find it in our local supermarkets, but I live in a small town. We don’t have any specialty markets, either, so I have to make my purchases online. 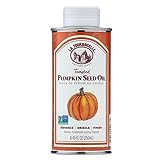 Pumpkin seed oil is a very healthy oil. The types of fats present are beneficial fats that can help reduce levels of the bad artery-clogging LDL cholesterol. They can also improve the level of the good HDL cholesterol in the blood. The oil contains linoleic acid, too. Linoleic acid is an unsaturated fatty acid that’s necessary for good health. In addition to pumpkin seed oil, it’s found in grape seed oil, wheat germ oil, hemp oil, almonds, walnut oil, sesame oil, rice bran oil, safflower oil, and other types of oil. Studies reveal that a lack of linoleic acid can result in hair loss, skin problems, and the slow healing of wounds.

The oil is also a source of vitamin B and vitamin E. The B vitamins are necessary for energy and cell metabolism. Because this group of vitamins is water soluble, they have to be replenished often. Vitamin E is an important antioxidant that’s able to scavenge harmful free radicals, which helps protect cells. The vitamin helps prevent blood clots, too, by decreasing the ability of platelets to clump together. Vitamin E is also responsible for maintaining a normal neurological function.

Pumpkin seed oil benefits include trace minerals and elements, too. It has zinc, potassium, iron, magnesium copper, manganese, and selenium, in addition to lignans that provide antimicrobial benefits. In other words, these substances can help the body fight off viral and fungal infections. The elements found in the oil seem to be beneficial to the prostate gland, too, especially in treating benign prostatic hyperplasia, or an enlarged prostate.

Wait – there’s more. This tasty oil might have some great benefits for diabetics. Studies that have been conducted on animals that had diabetes have shown that pumpkin seed oil helps to maintain normal blood sugar by regulating insulin. In addition, it helps protect the kidneys of diabetic animals. If this mechanism transfers to humans in the same way, every diabetic should keep some of the healthy oil on hand at all times!

If you’re looking for low carb snacks, buy pumpkin seeds. They’re delicious and nutritious. I like the nutty flavor and crunchy texture so well that I buy the seeds in bulk. If you’ve never tried the seeds, I suggest that you buy a small amount first, just to make sure you like them. If you like nuts and other types of seeds, however, I can’t imagine your not liking these delicious seeds. They’re very similar in taste and texture to sunflower seeds, but I actually think the pumpkin kernels are better. As high protein low carb snacks, pour some into a bowl and munch away. Just be careful – remember that the seeds are high in calories, so don’t overdo it. Buy some pumpkin seeds and give ‘em a try!