Our Personal Decision to Have a Vasectomy

After many heartaches and our awesome OB/GYN telling us that "it" may never happen, we were thrilled to finally get pregnant and stay pregnant with our beautiful, perfect in every way, daughter. The sobering part of the experience was knowing that it probably would never happen again. However, my husband and I decided not to dwell on that and instead worked together to get through a difficult and extremely emotional pregnancy.

When our daughter finally made her arrival into the world, we were overwhelmed with joy, and the fact that this was our last pregnancy was the farthest thing from our mind. At least for a little while... 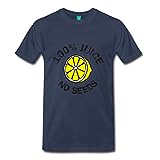 100% Juice No Seeds Men's Premium T-Shirt by Spreadshirt
Men everywhere are very protective of their "goods." If you know a guy like mine that steps up to be your hero by getting a vasectomy, a funny t-shirt can help lighten the mood. The 100% juice no seeds is a funny statement associated with vasectomies that always makes my husband giggle.
Buy Now

Much to our surprise, when I went in for our six-week, post-partum check-up, the OB/GYN recommended birth control. Why did we need birth control when getting pregnant was nearly impossible in the first place? Well, the doctor explained that post-partum pregnancies were common, even for women that have trouble conceiving. At that point in our lives, we weren't ready to consider another baby, so we went ahead with birth control.

As far fetched as another pregnancy was, another miscarriage weighed heavily on my mind, and I didn't know if I was strong enough to go through that again, ever. Unfortunately, conventional birth control didn't work and caused a disconnect in the marriage. We were in love and wanted to have a healthy relationship, but the fear of getting pregnant on top of raising and caring for a newborn made sexual relations off-limit.

Adding a Little Humor to the Situation!

My Husband, My Hero...Stepped Up to the Plate

After months of trying to figure out what worked best for us, my husband suggested he should have a vasectomy. At first, I was shocked. We were only 25 and 27; we only had one child...do people like us have vasectomies? Our friends, some of our family, and others were shocked that we were doing something that they felt was so extreme. However, the only opinion that mattered was ours, and we were doing it.

From the moment my husband decided to have a vasectomy he has been my hero. He's my hero because...he stepped up to the plate and took care of a problem that needed a solution. He realized that I had already been through so much, and now I had a toddler to care for, so putting me out of commission for a few days would cause more problems than it was worth, especially when compared to how simple and low-risk a vasectomy is.

Are you or your partner considering a vasectomy?

If you are considering a vasectomy as permanent birth control, you may be totally turned off by the idea because you think it is painful or emasculating. However, do you really know what a vasectomy is? When you have a vasectomy nothing changes except for the fact that you no longer produce sperm. In fact, all of the things listed below will be exactly the same.

As was the case in my situation, my husband stepped up to the plate to have a vasectomy so that we could enjoy sex without the risk of pregnancy. Or, more precisely, in our case the likelihood of miscarriage or other complications. Below, we will go over in detail other valid reasons, men should have vasectomies. Get ready, gentleman! It's time to separate the boys from the men.

The primary benefits of vasectomies are listed below. These advantages are dramatic, especially when compared to the risks of female tubal ligation. Vasectomies are:

A Diagram of the Human Male Genitalia Surrounding a Vasectomy

Are you interested in having a vasectomy, but don't know where to start? The following types of doctors usually perform vasectomies.

Vasectomies are Safer than Tubal Ligations

By design, vasectomies are much safer than tubal ligations. Why, you ask? Well, as you can see in the diagram above, the vas deferens, the tube that carries sperm from the scrotum, is easier to access than fallopian tubes, the tubes that carry eggs to the uterus. As a result, a vasectomy can be done in a doctor's office.

This permanent birth control method only takes about 20 to 30 minutes, and most men are ready to get back to their normal life including sex, in just a few days. Women, on the other hand, have to have general surgery, in a hospital, to have their tubes tied. Just the anesthesia alone creates more risk than a vasectomy. Women also usually require a lengthier recovery time after a tubal ligation than men who have had a vasectomy.

Vasectomies are a Cheap Form of Birth Control

When compared head to head, vasectomies create far fewer complications than tubal ligation. In fact, many men, like my husband, have the procedure on a Friday and are back to work on Monday.

During my husband's recovery time, he hung out around the house, iced with frozen peas periodically and went on with his life as normal. Sure, he had a little aching her and there for a few months, but it was nothing life-changing. I don't even think he ever complained about the procedure at all.

Still Undecided about Having a Vasectomy? Think About Your Wife/Partner

If you are still unsure about having a vasectomy, think about your wife or partner. If you have already had children, it's important to think about what they go through during this process. In most cases, pregnancy is 40 weeks. 40 weeks, buddy! It's an incredibly difficult time that comes with a roller coaster of emotions and body changes.

However, as women, we love it. In fact, some of us...not me, crave it. In comparison, a vasectomy is a very temporary uncomfortable procedure that will leave you on the couch for a couple days, which is microscopic when compared to 10-month human gestation. As a bonus, sex after a vasectomy, with your spouse or partner, is beautiful, spontaneous, and care-free.

There are no days to count on the calendar, anxieties about birth control pills, fussing with condoms, or other preparations that need to be made. Instead, all the precautions that were once a necessity to prevent pregnancy are a thing of the past, and the only thing left is to enjoy each other - carefree! So, whether you have just started to think about a vasectomy, or you are getting ready to go through the procedure in the next few days...remember, there are a million reasons real men have vasectomies and not a single good reason not too.

Agree or Disagree! I'd Love to Hear Your Opinions about Vasectomies