Mirror therapy is a non invasive, drug free therapy which is reported to have up to a 95% improvement rate for its users. It has no side effects and is easy to use.

The therapy consists of visual feedback, using a mirror box. The user sits in front of a box with two openings and opposite facing mirrors in the centre. There are many different styles of box on the market with prices ranging from £20 to £100. An ordinary mirror can also be used.

What conditions can Mirror Therapy be used for?

What is a Phantom Limb?

A phantom limb is a nonexistent limb. It is a limb that after amputation feels as though it is still attached in its proper place and moves along with other parts of the body. Sometimes the ‘limb’ has sensations – often pain but also itching, twitching, sensations of cold or heat, tingling or even gesturing and trying to pick up items in the case of a hand. A phantom limb can feel shorter than the original or twisted at a strange angle which can give rise to pain.

Phantom pain can arise in people who were born without limbs as well as in limbs that are paralysed through stroke or injury. Often following a mastectomy (removal of the breast) the patient feels the original breast is still present and gets nipple sensation though the nipple was removed along with the breast. This can happen with removal of internal organs too, such as the spleen or appendix. However; sensations in these organs cannot be dealt with by mirror therapy so we will only be discussing the conditions that can.

What are the reasons for Phantom Limb Pain or PLP?

What is a Stroke?

This may seem to be a patronising question but often people confuse a stroke with a heart attack. An easy way to describe a stroke is to call it a brain attack. There are two types of Stroke, the most common one being an Ischaemic stroke where the artery is blocked by a blood clot, effectively cutting off the blood supply to the brain. The heart can be a factor in a stroke if it isn’t beating properly because this can cause blood clots to form and if those clots find their way to a brain artery could cause a stroke. The other type of stroke is a haemorrhagic stroke which is caused by a ruptured blood vessel in the brain.

What is Complex Regional Pain Syndrome?

CRPS as it is abbreviated to, is a persistent burning pain with swelling and discolouration in a limb. The areas most often affected are the feet, knees, wrists, ankles, hands or sometimes the whole of the limb.

What are the Causes of CRPS?

Again a definitive cause has not yet been discovered but it sometimes follows surgery; which leads experts to believe that it could be due to damaged nerves. Other theories are that it could be inflammation or faulty pain signals in the brain.

Arthritis is a complex condition consisting of five different types of musculoskeletal condition. It is indicated by swelling, stiffness and pain that does not follow an injury and lasts longer than a week. Fever is often present and everyday tasks become difficult or impossible. The pain does not respond to keeping moving, pain killers or heat.

What are the Causes of Arthritis?

In some cases arthritis is hereditary. Old injuries or repetitive and physically demanding work can cause arthritis. Allergy or infection can cause transient arthritis which comes and goes.

How can Mirror Therapy Help?

This therapy was originally called Mirror Visual Feedback and was devised by Professor Vilayanur Subramanian Ramachandran solely for the purpose of helping patients with amputated limbs who believed the phantom limb was stuck in an uncomfortable position and was causing pain. It can help by convincing the brain that the missing, painful, weak or paralysed limb is moving. As the person is watching the ‘phantom’ partmoving, the brain is creating new pathways and connections – pain free ones.

You can either buy a mirror box or use an ordinary mirror of an appropriate size for the limb or body part. If it is your leg that is affected one on a stand may be better. You should be able to see the whole of your limb in it. The affected limb is placed either behind the mirror out of sight or in the box. Your corresponding good limb is then moved in front of the mirror so that it looks as if the absent, paralysed or weak limb is moving. This only works if you cannot see the limb behind the mirror; it is best if you do not look at it. Do this therapy as often as you wish for as long as you wish; there are no side effects. 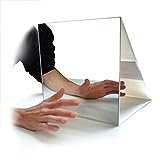