Rupert Isaacson is a jourmalist who worked in Africa as a rights activits. He had always ridden horses himself and been a fan of outdoor life.

His three-year-old son Rowan was diagnosed with autism in 2004 and he said that this was 'like being hit across the face with a baseball bat'.

Rowan failed to connect with his parents or other children - a trait often experienced by those with autism. At 18-months-old Rowan was also not pointing or developing a vocaubluary like other children his age.

Rupert and his wife Kristin tried to encourage Rowan to interact but without success. Incredibly, it was through a horse called Betsy that Rupert says he was finally able to find a way into his son's world.

Initaially Rupert had given up his life-time passion for riding and refused to let Rowan go near the horses, in case his unpredictable behaviour caused them to spook.

One of the few activities that Rowan did enojy was being let out to play in the woods behind the family home. There he would run through the trees.

The toddler was also captivated by wildlife and loved trips to the zoo. However, he often tried to climb the fence and once attmpted to get into the crocdile enclosure.

Rowan was clearly mesmorised by animals, but still his temper tantrums and autism continued. Then one day an unexpected break through came.

Rowan wandered off from his parents at their home and climbed through a fence into a field where five horses were grazing.

As Rupert could only look one, fearing the worst, Rowan laughed as he fell to the floor in front of an enormous mare called Betsy. Rupert looked on, concerned that the usually grumpy horse could be spooked and knock Rowan.

But incredibly, Betsy dropped her head toward Rowan and began gently nuzzling him. The other horses looked on as Rowan enjoyed being surrounded by the powerful beasts.

Rupert was delighted that Rowan enjoyed horses, and felt that there was a special connection between his son and the animals.

Rupert took Rowan on a trip abroad where he met bushmen and Shamans who laid their hands on the youngster to heal him. Although there were some beneficial repsonse, the effects wore off when they returned home. 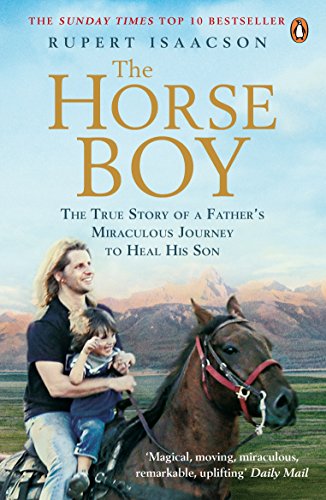 Horse Boy: The True Story of a Father's Miraculous Journey to Heal His Son
Buy Now

But once again Rowan still had the same connection with Betsy the horse and ran straight to her field. Rupert saddlade her up and even took Rowan out to ride.

It was during this ride that the breakthrough in Rowan's autism came. He began to have a basis concervation with his father, saying when asked that he wanted Betsy to go faster and 'go to the pond'. A transformation had happened and Rupert was overjoyed.

They dismounted. 'Without hesitation, Rowan opened his arms and hugged Betsy's head, which was hanging low enough for him to reach. Then he gave her a kiss,' Rupert said.

'As he did so, an expression of extraordinary gentleness came over her - a certain softening of the eye, a blissful half-closing of the eyelid with its long black lashes.'

The passion for horses in the autisctic child started a healing journey that has resulted in a book, The Horse Boy: A Father's Miraculous Journey To Heal His Son. The book has also been made into a film, The Horse Boy.

This tells the story of how Rupert, his Kristin and their son trekked on horseback through Outer Mongolia to find healing. This journey changed their lives forever.

The family have also started the Horse Boy Foundation to help families on low-incomes who have children with an autistic spectrum disorder. There are also a number of Horse Boy Camps for children similar to Rowan.

Rupert's story of his journey to help his son Rowan gives hope to the parents of children with autism. It is now becoming more widely recognised that animals, and specifically horses, can have a beneficial and therapeutic effect on autistic children.