Allergic rhinitis, also known as hay fever, is typically viewed as a seasonal problem. Fall and Spring are beautiful times of the year, but they can bring misery for millions of people who suffer from allergies that can cause hay fever.

Allergic rhinitis affects approximately 10 to 30% of all adults, and around 40% of children. That’s a huge sector of the population suffering from nasal allergies. The main triggers of allergic rhinitis pollen, animal dander and dust. Scientists believe hay fever has a genetic tendency, which means this tendency can be passed on to the offspring of allergic parents.

What is Allergic Rhinitis and What are It’s Symptoms?

Allergic rhinitis, or hay fever, is caused when the body’s immune system encounters particles (pollen in this case) it considers harmful. These particles are called “allergens” because they cause allergic reactions in the body.

The immune system attacks these foreign particles (allergens), causing the symptoms we’re all familiar with: sneezing; watery and itchy eyes; runny nose, post nasal drip, sinus congestion, and itchy nose, ears and throat. Hay fever can be quite debilitating, even sometimes getting worse over the years, and then suddenly completely disappearing after a person reaches their elder years.

Climate change has been under heavy debate the past few years. Many scientists believe human beings are responsible for the changes in climate temperatures, weather, and rising sea levels. Global warming has been studied and some interesting findings have been uncovered in regards to pollen and pollen allergies.

Scientists, from Genoa University in Italy, performed a six-year study of pollen counts (from 1981 to 2007). Over this time, the scientists noted that the pollen load increased with gradually increasing temperatures and extended growing seasons. The study also found the percentage of patients with pollen reactions also increased during this time period. The study was not able to discern if the longer pollen seasons were responsible for more people developing pollen allergies.

This and similar studies have shown some interesting links between increasing temperatures and longer growing seasons on hay fever allergies, and suggests that climate change is responsible for an increasing number of people developing pollen allergies due to the increased load of pollen in the air.

How is Allergic Rhinitis Diagnosed?

Your doctor will give you an examination and ask about the symptoms you are experiencing. Be sure to tell your doctor all your symptoms, even if they seem insignificant or unrelated to your condition. It is important that your doctor knows everything so he’s able to make a proper diagnosis.

After your exam, your doctor may want to go ahead with allergy testing. Allergy tests are used to determine exactly what you are allergic to.

Standard allergy tests include skin tests which can take the form of a scratch test, or another version of the skin test is where a small amount of allergen is injected under the skin. In both types of test, the patient is checked for reactions to the tested allergens.

The tests can be uncomfortable, but the reactions are the most annoying part of the tests. Reactions to the allergens will cause redness and swelling at the testing site on the patient.

Once the doctor has found what you’re allergic to, he/she will have a better idea of how to treat your allergies.

How is Hay Fever Treated?

So, how do you go about getting relief for your seasonal allergy symptoms? The doctor might start you on an over-the-counter (OTC) antihistamine medication. There are several very good products available over-the-counter now that used to be available by prescription only just a couple of years ago. If these OTC medications don’t work for you, your doctor will go ahead and give you a more powerful antihistamine that’s only available by prescription.

Antihistamines work by blocking a substance called “histamine” that your body produces as a response to the allergens your immune system is trying to fight. Histamine causes reactions such as those described above: runny nose, itchy eyes, etc. Antihistamine medications block the histamine, and thereby relieve the patient’s hay fever symptoms.

Sometimes it's necessary for you to take other medications in addition to antihistamines. These might include nasal steroid sprays, and decongestants in tablet and spray form. There are also other options to help patients to feel relief from nasal stuffiness.

One of the best ways to clear your nose is by using a nettie pot, or another similar system. The idea behind these systems is to clean the nose and sinuses using a warm salt water solution to clear out allergens and other irritants. This method offers relief for the pain of congested sinuses, along with cleaning the nasal passages. 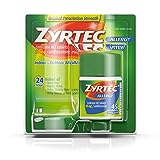 Is there a cure for allergic rhinitis? Tips to avoid allergy triggers

Unfortunately, no, there is no cure for allergic rhinitis. The best way to stay healthy is to avoid the allergens you are sensitive to. This is hard to do when the allergens are in the very air you breathe, but here are some tips to help you develop a plan for avoiding as much pollen as possible:

Girl in the Grass

What is the prognosis for allergic rhinitis?

The prognosis is good if you take preventive measures such as exposure avoidance, take any medications prescribed by your doctor, and by following the tips above. By following these measures you will feel better and will be able to enjoy being outdoors in any season.

Please follow this advice at your own risk. I am not responsible for any results you might have as the outcome of following the advice presented in this article. Always first check with your doctor and other health care providers before making any changes in your daily living situation, diet or medications.

What methods do you use to treat your seasonal allergies?