Stealing Ill Effects of the Flu with Thieves Oil

Sandy J Duncan is a Neurofeedback Specialist and completing her Doctorate in Natural Medicine. She empowers readers with natural solutions!

The mysterious tale of Thieves Essential Oil takes place in the 15th century in the midst of the Black Plague. There was a band of thieves who robbed the dead and dying but seemed to be totally immune. These unscrupulous but very successful four thieves were finally captured in France and convicted with these terrible crimes of robbing the victims of the plague. While they were in court, a plea bargain was entered into. If they would tell the court officials how they were able to escape the plague while being in constant contact with the infected corpses there sentence would be less severe. It was then conveyed that they had a special concoction they prepared since they had a good knowledge of spices and fragrances. Apparently the thieves had simply rubbed themselves with aromatic herbs (cinnamon, clove, eucalyptus, and rosemary). These each had their own special benefits but when put together were so powerful as to help them become immune even to the plague.

Fast forward about five centuries and you can now buy Thieves oil. It’s claim to fame is the fact that it is still anti-viral, anti-bacterial as well as anti-septic like it’s historical original. The spray version can be used as a hand sanitizer or many people diffuse it to ward off colds and flus. I love the way this essential oil smells when you diffuse it in any room in your house to help protect yourself from all those nasty flu bugs. Here’s my favorite version of a make it yourself recipe:

What are You Thinking?

Have you ever used an Essential Oil?

Essential Oils that are undiluted need to be handled very carefully. Keep out of the reach of children. Only use diluted solutions directly on skin.

Interesting Ways to Use Thieves Oil

How to Make It and How to Use It

Add the 4 ingredients to a small glass bottle with a dropper. This undiluted essential oil will be very strong and can be added to a diffuser to fight infection. I recommend using 5-7 drops. To create a spray you can use directly on your hands or surfaces to disinfect, you can dilute the essential oil by using a “carrier oil”. It is fine to use olive oil since most people have it on hand. Use 2 tablespoons of the carrier oil and 20 drops of the Thieves oil.

If you are more of a shopper and less of a DIYer, you can also buy Thieves Oil already blended and ready to use.

Thieves Oil: Bargain or a Steal? 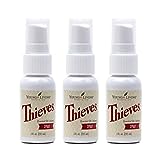