This summer the heat has been setting records all over the country, and repeatedly, when I’m outside sweating when I really don’t want to be, I find myself imagining diving deeply into cool, clean water to be refreshed on the outside and revived on the inside. I do not daydream of the few rather luxurious hotel pools I’ve known: my mind wanders to (my) world’s very best “swimming holes.” If you glance at the photos I’m including, you’ll see that in at least this one way I’ve had a very lucky life.

A Lake to Ourselves

The first place I’m going to tell you about is not a swimming hole per se, but I did have one of the more memorable swims of my life there. Maybe 40 miles outside of Pittsburgh is a state park called Crooked Creek, which surrounds a lake made by damming said creek. The original creek bed wound around the Western Pennsylvanian hills, so the lake is mostly long and sinewy. Near the dam, though, it is at its widest, and near that, on a peninsula formed by what was once a dividing hill’s ridgeline, is the public beach. Years ago, however, when I was in my early twenties, you were allowed to swim anywhere on the lake: because of budget cutbacks instead of hiring lifeguards the state just posted “Swim at Your Own Risk” signs, which I loved. The lake wasn’t huge, but if someone swam to the other side, stood on the bank and waved at you, well, at that distance he looked like he was only two inches tall.

Anyway, the memorable swim. One summer, after about a week of really heavy rain, the lake flooded, submerging most of the peninsula that held the public beach and parking lot. Not knowing this, a young lady friend of mine and I went there one day only to find the road down to the beach closed off. We parked the car higher on the hill and walked down to the beach, and we had the lake to ourselves. So, imagine, after a week of being stuck inside and looking out the window at only gray skies, finding yourself sharing a beautiful late summer day with an attractive young woman, well-tanned and toned, swimming out in the lake, just the two of you, with no sign of anyone else anywhere around. We were out in the middle, floating on our backs, making sneak dunk attacks, splashing and laughing. Imagine “the camera” pulling back to up on the hill, looking down on a man and a woman relaxed in the water in the middle of a sun-sparkled lake, surrounded on the shore by the multi-hued shades of late summer greens, big, white clouds noiselessly tumbling and bumping their way across the big, blue sky. “The audio,” though, stays with the couple: his laughter and her playful shouts and screams carry across the water, blending with the background drone of sleepy cicadas wheezing in relay and the slight breeze sighing in the surrounding trees. It was just the two of us, and apparently all of Creation. Albeit skinnier versions, we were just like Tarzan and Jane. It was a fine, fine day.

A River Gorge to Ourselves

I had another great swim, about 20 years later, in Mather Gorge on the Potomac River, a little below Great Falls. It is NOT a good river for swimming, which we knew well from kayaking there. Yes, we played in the whitewater, but we were in boats and we wore helmets that yes, we did occasionally use to bounce off of rocks. So, early in the evening one fine summer day Jessica and I were coming back down the river after working our way up past the section known as Wet Bottom. In the gorge, although the currents swell up from beneath and show themselves in swirls on the surface, the water is deep and rather easy. We were tired and a little hot, so we rolled our boats just to get wet. Then we rolled them again, holding our breath and staying upside down longer than necessary. Then, on the third roll, without agreeing to, we both kicked out of our boats and just stayed in the water, our paddling vests holding us up comfortably. One hand holding the grab loop at one end of our boats and the other hand holding on to the middle of our paddles, we floated on our backs down the river, and we watched the gorge’s tall walls of rock as we passed by, one side in cool shadow, the other warmly lit by the nearly setting sun. We were quiet, and we talked, and we goofed around attempting a bit of combination kayak-twirling / synchronized swimming, but mostly we just floated, cool and comfortable, through a little piece of wilderness no more than 15 miles from The White House and the millions of people in the D.C. area. The only piece of conversation I remember is her saying, “It just doesn’t get much better than this.”

But I digress: these were great swims, but they’re not swimming holes. I’ve enjoyed ponds and creek holes in at least half dozen States, but easily the best were on the island of Guam, which is where I was when I was a young man in the U.S. Navy.

To get there, because you had to climb down the short end of the cliff (behind and to the left of the camera) and walk through the jungle past twisted and rusted metal from WWII and even an old Spanish stone well, although a popular place, it was never very crowded. We’d snorkel all over the tidal pools, chasing little octopi and staring at what were either truly bizarre tropical fish or possibly alien life forms. Yep, Orote Point definitely deserves an Honorable Mention.

At the north end of the island, on the fringe of the Air Force base, is a cave that holds a freshwater spring, once used by the WWII Japanese soldiers (and others) as a water source. Clean, clear water? You bet! The first time we went there, after finding the cave entrance and before our eyes had completely adjusted, one of us said, “Where’s the water?” Pat’s wife Nancy tossed a pebble into the cave, and ripple rings formed “in the air” . . . The pool in the pic (there were several pools separated by rocks) was 38 feet deep, according to a diving depth gauge, but from the surface you could see individual pebbles. It was fun to swim there, but it was also great fun just to make the hike down to the cave. See the waves crashing on the rocks in the second photo? Theoretically those waves were unbroken all the way from the western coast of the Americas, about 6,000 miles away. That’s just kind of cosmically cool.

The Second Best Swimming Hole in My World: Tarzan Pond

On the south end of the island, out in the “boonies”, was Tarzan Pond. In those days (30 years ago), many parts of the island were open; you could just point your dirt bike and go. We’d ride our motorcycles over the tall-grassed hills and through the ribbons of jungle in the valleys, and often we’d circle around in the afternoon to this swimming hole. We’d take our boots off and dangle our feet in the water, and little fish would come to peck at the hairs on our legs.

In the second photo, the kids belong to some military family, and my friend Jim and I had great fun hamming it up with them as their parents watched from the other side of the pond.

As you can see from the last photo, the filling stream poured through carved rocks, creating several ideal spots for a water massage. Notice the light on the water just behind Jim's head.

I could go on, but the photos are worth thousands of words, aren’t they?

Oh yes, this place is probably heaven on Earth. To get there we had to go to the other side of the island, then go about ½ mile off the road, use a rope to climb down a dirt cliff, wade across the river, follow the left bank down, and then climb down another dirt cliff beside the first water fall. It was always worth the effort. It was a happy place: always, everyone there was friendly and smiling regardless of where they came from, what their skin color was, and what language they spoke. When there, your worldly cares evaporated and you were just happy to be alive, enjoying the sunny day and the rich smells of the jungle and the big, big, big blue sky above and the whole world beneath you. Well, maybe it was the wine . . . but anyway, sometimes it sure seemed like you could feel yourself a tiny 6-foot tall man sitting on the surface of a planet as it rolled through the stars. Life can be quite good.

There’s the first waterfall and its pool, and then maybe 50 yards of smooth rock with a variety of hollows that varied in comfortableness with the rains and depth of the river, and then the second falls. There was a pool below them, near the center, but because of the curving lip of the falls above, you couldn’t see the pool until you were committed to going over. You had to line yourself up with certain trees and rocks, lean downhill like a skier, and walk over the blind curve of wet rock: there wasn’t any changing your mind, and as you can see from the photo from below the falls, it was important not to go to the left or the right.

So, have I been lucky, or what?

It is fun to have memories like these, but it is always more fun to make memories. In the decades since I was on the island, there have been times when Talafofo crossed my mind as I commuted on a gray winter morning to a job that was sucking the soul out of me, and the memories would bring a smile and some comfort. But memories are not what gets a person out of bed in the morning: it is the anticipation of making new memories that motivates us all. So, my next “great swim” might be next winter, or the one after that, when I take my little sailboat down to the Bahamas and on to St. Lucia, St. Kitts, Barbados, Martinique, and maybe all the way to Grenada or even Trinidad . . . are there any sailor-ettes out there that would like to come along?

Aruba, Jamaica oooh I wanna take you
To Bermuda, Bahama, Come on, pretty mama
Key Largo, Montego, Baby, why don't we go
Down to Kokomo
We'll get there fast
And then we'll take it slow
That's where we wanna go
Way down to Kokomo

Here's a little help maybe finding a swimming hole near you . . . 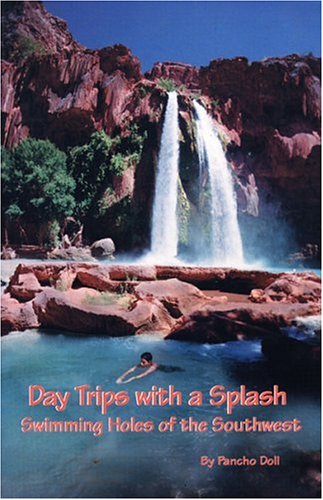 Day Trips with a Splash: Swimming Holes of the Southwest
Buy Now