After numerous cancellations on my part, only a few weeks ago I decided, finally, to have my second total hip replacement surgically performed. The first operation, on my left hip, was 'done' in July of 2009, and 24 days ago, in March of 2012, my right hip was replaced. While the first surgery went along quite 'swimmingly', this second trip to the operating table was far different and I was forced to deal with some frightening and potentially dangerous complications.

Now, since the first procedure had gone so very well, I had no reason to fear this one would be any different. What on earth could possibly go wrong? My husband and I planned ahead for the recovery phase,a familiar yet medically unpleasant time, I can assure you, but off we went from our home in Bishop, CA, to Mammoth Lakes, around 40 miles North of our home, where the surgery was to be performed; a well-traveled yet still worrisome journey 'up the hill' to our destination. 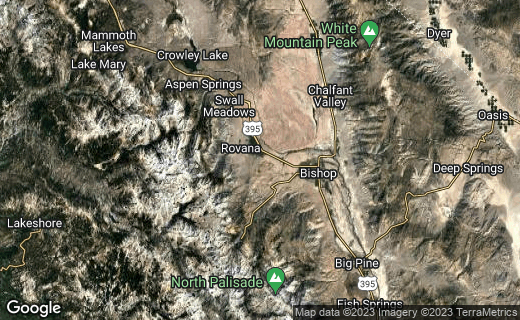 The Hospital and Environs

When we arrived at the hospital, most was as it had been in 2009, and I was admitted without incident, whatsoever. Insurance? Check. Heath-Care Proxy/Power of Attorney? Check. "Sign here", done. Everything was in order and I was only somewhat nervous about what was to come.

Once admitted to Mammoth Hospital, all seemed well, or so I originally thought. A terrific nurse by the name of 'Scott' then took me and my husband to the pre-operative room, replete with doctors, nurses, and other staff. I was extremely pleased to be attended to by this specific nurse, he was both thorough and kind-he had a terrific "bed-side manner", in other words!

Once Scott and various other nurses had "prepped" me, inserted an IV, etc., for the hip surgery, I was treated with a sedative, "Ativan", which relieved my mild anxiety and I prepared myself for the operation itself. Though my husband was loathe to say "good bye" at this time, he was not all too keen on the needles and IV's inserted into my body, nor was he enjoying the discussion of back surgery in the next adjoining bed. Anthony probably needs an operation on his back, but was mortified to hear the joking and laughter going on in the next curtained area. It was quite morbid, I must say. The family and doctor were very inconsiderate, in my opinion.

After Anthony left, I was visited by both my surgeon and my anesthesiologist. They were adamant about understanding exactly what my birth date was-which was asked at every turn during the entire procedure-, what drugs I had been taking, and what I expected from both the operation and the anesthesia.

I obliged the two, and things began to move quicker than I had expected. Another doctor, a favorite of mine-Dr. David Araya showed up-and I happily and gleefully (in my Ativan induced state)-loudly called to him from across the room. "Hey there, Dave", as I used to call him. He responded with a wave and a half-smile, the poor fellow!

In the Operating Theater-Off to Dreamland

I was in a most merry mood as they wheeled me in to the O.R. Prep nurses were everywhere, my surgeon and anesthesiologist were making jokes-not about the patient at hand, mind you-but 'funnies' about golf, etc., you understand; the typical stereotypical jokes attributed to physicians in this day and age.

Once attended to by all these professionals, I went to sleep with the same medicine that killed Michael Jackson, yet I am blessed to have lived through it. I wish he had, that's for certain.

"If you remain in Mammoth, we do not have the resources to deal with cardiac problems. If you choose to be flown to Reno, their medical team does. What do you want to do?" I was still quite groggy and replied, "Whatever you think, Dave, I don't know".

It was then, at 3:30 a.m., that Araya phoned my husband, Anthony, at home to make the decision for me. I had signed the health-care proxy, as I have indicated before, and It was now up to Anthony to decide my fate.

Have you ever experienced surgical complications?

My dear husband-of nearly 25 years-was in a position I hope I will never be in. Deciding on the fate of a loved one is a choice I cannot imagine making. But he did, and after making some valid and thoughtful requests, he asked. "Dr. Araya, would you contact a specialist in this area of cardiac problems before I decide?" "Yes, of course I will," replied Dr. Araya. He did, and the specialist recommended I be flown to Renown Hospital. All was still very unclear.