Professor Izumi Tabata, previously a researcher at the National Institute for Health and Nutrition is accredited with the Tabata Protocol although it was in fact Irisawa Koichi; the head coach of the Japanese speed skating team who pioneered the idea.

Tabata carried out research on two groups of people. The first group pedalled an exercise bike or did some other exercise as fast as they could for eight bouts of 20 seconds interspersed with 10 second rest periods four times a week for 6 weeks. The second group cycled, swam, skipped or jogged at normal speed for an hour for 5 sessions a week for 6 weeks. It was found at the end of the 6 week period that the first group had improved their aerobic fitness and anaerobic metabolism much more than the second group.

The protocol which is rather like interval training consists of eight 20 second bouts of high intensity exercise followed by 10 second rest periods. If cooling down and warming up are taken out of the equation the whole session can be done in 4 minutes.

Basically the exercise can be anything as long as it is done at high intensity i.e. as hard as is possible. Some suggestions could be:-

Four minutes a day, makes it all sound so easy but is it the ‘quick fix’ that everyone is hoping to find?

Twenty seconds sounds so little but people I have spoken to at my local gym have reported that it can feel like the longest few seconds of your life. Also the 10 second ‘rest’ periods are not really rest in the conventional sense as there is barely time to catch your breath before the next intense burst of exercise.

Many gyms are offering Tabata classes and tailored programs but in actual fact the exercises could be carried out at home with little or no cost. You would need a Tabata timer though so that your bursts and rests are accurately monitored.

The benefit of doing it in a gym is that someone is on hand should anything go wrong. When carrying out such high intensity exercise mishaps can and do occur. Imagine if you are on your own lifting weights, there is always a chance that the weight could slip from your hands and injure you. I personally would recommend something like jogging on the spot or some other exercise that doesn’t require equipment, for doing at home. Also make sure that you warm up and cool down properly or you could cause injury.

The plus point of all this is that as well as improved aerobic and anaerobic fitness, weight loss is a welcome side effect. In my research the biggest weight loss reported was 5lbs in fourteen days with no change in diet. This is mainly due to your metabolism staying high not only during the workout, but up to 36 hours after the workout as well. Your body will be burning fat even when you’re at rest.

As with all exercise programs; you must check with your doctor first that it is safe for you to exercise. If you have high blood pressure or heart problems this is essential. The Tabata protocol is thought to be useful to diabetics as high intensity exercise increases movement of Glucotransporter 4, a protein found in skeletal musculature. This protein is essential to glucose metabolism which is why diabetics are encouraged to exercise. However, since people with diabetes are more prone to stroke and heart attack I would approach this kind of exercise with caution; especially if your diabetes is poorly controlled. 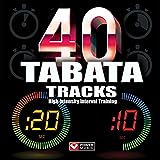