This plant is amazing! For thousands of years the Chinese have regarded ginseng as a medicinal cure-all, and they still do today.

Overseas demand plus rising popularity here in the states has led the herb to near extinction. One pound of its “fleshy” root found in the wild can be sold for as much as $500.

It is found only in the Northern hemisphere both in the wild and on private farms, where the "cooler" climate provides ideal conditions for growth. Cultivating ginseng requires much time and patience since the root is considered most potent when allowed to age in the earth five or more years.

The U.S. government has done much to regulate and protect it. But poachers with dreams of fast cash have taken to the hillsides and forests and have caused the plant to become endangered.

“True” ginseng is either Asian or American.

Asian ginseng is considered to be more of a stimulant, while American ginseng is thought to produce a more “calming” affect. They are of the genus Panax and contain ginsenosides—the powerful main ingredient.

Here are some of the wonderful benefits:

After reading the seemingly endless positive effects of this herb, one almost gets the sense of travelling back in time to the age of the travelling salesman with his magic “cure-all” snake oil potion. Personally, I am a big fan of ginseng. I feel the increased endurance and stamina when I do my morning workout. I rarely feel stressed about daily problems when I’m taking ginseng as a daily supplement. And my mood is greatly increased.

More and more studies are being conducted to prove the effects of ginseng. But the people who swear by it don’t seem to care what can be proven in a lab. If you’re curious, do some research and try it for yourself. If you’re currently using medication for diabetes, consult your doctor before you take ginseng due to its effect on insulin levels. Otherwise, it could be a wonderful natural alternative to pharmaceuticals.

I use ginseng on a regular basis 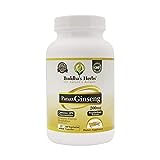