After having obtained a degree in biochemistry, Leah works for a small biotechnology company and enjoys writing about science.

How Do Ovulation Prediction Kits Work?

Ovulation, or the release of an egg from an ovary, is controlled via a series of hormonal surges in a woman's body. The "first day" of a woman's cycle is defined as the first day of a menstrual period. This is typically called Cycle Day 1. During the first portion of a woman's cycle, a hormone called Follicle Stimulating Hormone (FSH) causes folllicles to enlarge and mature in the ovary.

When a mature follicle is obtained, a surge of Luteinizing Hormone (LH) and FSH cause the egg to be released from the follicle. Ovulation predictor kits detect the surge in LH, allowing women to determine when ovulation is going to occur.

The release of the egg, or ovulation, typically occurs from Cycle Day 10 – Cycle Day 14 in women. Each woman will have her own pattern of ovulation, however, and some women will ovulate early, late, or have irregular cycles with random patterns of ovulation. The use of fertility monitors like ovulation predictor kits helps many women determine their particular pattern. 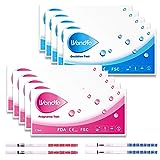 Wondfo Combo 40 Ovulation and 10 Pregnancy Urine Test Strips
Pink dye kits are accurate when used properly. These tests are more accurate when a woman is also tracking basal body temperature to pinpoint ovulation. After trying to conceive for 10 months, our family had success while using a pink dye ovluation kit.
Buy Now

The cheapest ovulation testing kits are pink dye tests. These tests detect the quantity of LH and will demonstrate a pink line. The intensity of the color corresponds with the amount of LH produced. As ovulation nears, a faint line will appear. When the hormone surge occurs, the line will become very dark, indicating ovulation is imminent or has just occurred.

These tests have drawbacks, however, as the depth of color must be interpreted by the user. Many women will wonder if the line has gotten dark enough to indicate ovulation is occurring, or if it will continue to get darker. Sometimes women will note that the line is dark, becomes light, and then becomes dark again a day or two later - this can be confusing and makes the date of ovulation hard to pinpoint.

These ovulation tests must be used properly to obtain an accurate result. When using these kits,

These tests work well and are inexpensive, but women who want an accurate and concise ovulation test often prefer digital tests.

Digital ovulation predictors remove a lot of the guesswork from determining when ovulation is occurring. These tests provide a very clear "yes" or "no" answer. While the cost is higher than the pink dye kits, women who are actively trying to conceive may prefer the improved accuracy of the digital tests.

The Clearblue Easy digital testing kit includes 20 tests and shows a smiling face when a surge of luteinzing hormone is detected. These tests are 99% accurate at detecting the surge, and there is no subjective guesswork involved.

Since these tests are more expensive than the pink dye tests, many women opt to use both types of tests. Starting on Cycle Day 10, women will use the inexpensive pink dye tests – when the line intensifies in color, a digital test can be used to confirm whether ovulation is occurring or not. This may extend the use of the expensive digital tests over the course of several months, saving money without sacrificing accuracy.

What type of ovulation test do you prefer to use?

The most expensive option is also the most accurate and helpful for women who are trying to conceive. The Clearblue Fertility Monitor is able to detect luteinizing hormone and estrogen fluctuations. This testing system will pinpoint the two most fertile days in addition to the fertile days leading up to ovulation.

The display screen will give a "fertility readout" each day, and is entirely objective. The device uses test strips, which must be purchased separately. Most women will use about 10 testing strips per cycle with the Fertility Monitor system.

There are several free apps and websites that make charting BBT an easy task. Fertility Friend (located here) is a fantastic free website that tracks basal body temperature, determines the day of ovulation, and allows women to determine the length of their luteal phase (the number of days from ovulation to the next menstrual cycle).

How to Chart Basal Body Temperature