The Golden Wellness Formula-Yellow Root is one of the best herbal remedies known to mankind. This herb has been in our household for five generations as I'm sure this cure all formula was with the generations before and will be with the generations to come. When I was a child, we didn't go to doctors for everything like we do now. Someone was sent to the woods to get yellow root. It was cleaned of the dirt and the bark was removed and a tea was made for us drink. At that time, we didn't have honey to sweeten it with and we had to drink it straight. That was the most awful stuff I have ever tasted, talking about bitter, it was beyond bitter with a capital "B".

Where To Find Yellow Root

Yellow Root herb grows in wooded areas, something like a forest. The Yellow Root Plant likes the shade and it grows in patches where the soil is dark, rich and moist. Our family originated in Alabama and as a child, we found yellow root near streams of running water, close to the shade of trees and other plants.

How To Make the Yellow Root Herb Tea

The branches of the Yellow Root Plant are washed first to remove the dirt. We pulled the whole plant up from the ground. Then the bark is removed and the stems or branches are washed again. They are broken into small pieces to fit in a pot half filled with water and brought to a boil and boiled for a least ten minutes. The formula is allowed to cool and then strained through a cloth into a container. When I was a child no sweetner was added but now we add honey to sweeten to taste. Back then we couldn't afford honey and sugar was preserved for my parents coffee.

What we call The Golden Wellness formula is good for just about everything. The yellow root herbal remedies include but not limited to the following list. One herb, takes care of all these remedies:

Yellow Root is also known as Golden Seal in today's world. The yellow root herb that takes care of so many remedies is now grown, cultivated, processed into capsule form and extracts. It is also available with another powerful herb, echinacea . Known to boost the immune system, combat colds and related illnesses, such as flu.

DO NOT USE IF PREGNANT - Yellow Root Stimulates the Uterus 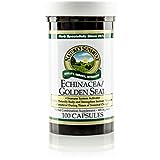