The Importance of Your Final Arrangements

It’s something that everyone should do

You are going to die.

It may not be today. It may not be tomorrow. It may not even be next week, next month, or next year. However, eventually, you are going to die. When we have to take a good long look at our own mortality, we need to face it with a cold solemnity that only you can only do when considering your own non-existence.

It’s rarely fun – although, there are certain individuals that do get off on planning the best party in the world where they’ll never get to attend. That mentality can also easily see an afterlife where they will be reunited with loved ones that have passed and will from that moment on be able to look down upon their surviving family members, smile, and throw a little energy their way to help them win the big game or some other kind of triviality that happens in life’s drama.

The cold hard truth is that all of the arrangements are done for the survivors. It’s all part of the grieving process. When a family member passes away, especially a parent, there is a metaphysical belief among most people that they should do right by them and send them off to the afterlife properly. The deceased, if he planned everything on his own, made arrangements to make the coordination for the survivors as painless as possible.

That’s the real deal. If you thought you were loved, you know that your survivors will be grieving too much to make rational choices. If you’re leaving behind a home, you know that either all of your stuff will be going to other people or will be thrown into a dumpster. All of these little choices are things that need to be made while a person is still living and should not be made by a close family member who is under emotional stress.

It’s all about the survivors.

As we really know nothing about what happens after you die, we can assume either one of two things. Either everything you learned in your particular faith was correct and you’ve moved on to bigger and better things (hopefully) or your life signs have stopped and what was once your living body is left without a necessary force to animate it and all processes have stopped, making you “meat” – quickly spoiling meat at that, too.

Yes, I know; it’s harsh. Whatever your spiritual faith may be, you will be just as dead as any atheist and you will have left behind a lifeless shell.

Unfortunately, due to the attachment to the person you used to be, your family will have to dispose of you properly and with respect. People do either one of three things: finance and meticulously plan every aspect of their own funeral, finance and let a family member (or close friend) do what they think would be appropriate, or nothing.

In the spirit of understanding what responsibilities and consequences lie with making the right decision, I am going to illustrate the “Goofus and Gallant” versions of making your own arrangements.

Let us start with Gallant or my mother-in-law’s funeral.

My mother-in-law died back in 2009 of cancer. We set up a hospice in our home and she died in a warm atmosphere as opposed to some cold hospital room. My mother-in-law was one of those rare well-organized people you find only working in corporate law offices. She was legally separated from my father-in-law for over forty years, and being a Catholic, she did not divorce. As my wife was an only child, the responsibility to make final arrangements fell to her.

My mother-in-law had bought many low level whole life policies over the year which financed a modest funeral. She had a family plot that her parents and grandparents were buried in – so that was taken care of. She had told my wife what funeral home they used. Every other decision that my wife had to make she was allowed to make based on what she believed her mother would want.

My mother-in-law’s one personal request was a playlist for the songs played during the wake. I found them all within iTunes and burned a CD for the funeral home.

The death benefit left by my mother-in-law’s whole life policy paid for almost everything she wanted. The amount of money my wife and I had to lay out for her funeral expenses was minimal.

When it was over my wife could begin to mourn and begin the grieving process.

The experience was completely the opposite. My father-in-law was not a man who even liked talking about death nor did he make any kind of preparation for his passing. He was a little over eighty when he passed away. It was a massive heart attack and he died alone in his apartment. Fortunately, he was discovered within the same day as his passing.

My wife was alerted to his passing through the city’s police department by phone. And while my wife had been estranged from her father, it was still a dreadful shock.

It was not a surprise that my father-in-law had no insurance. The thing you never want to do is guess what would have made him happy. His home was a disorganized mess and disposing of his personal things, while somewhat painful, yet easy, as he had very few things that my wife would wish to keep. Everything else was left to be thrown into a dumpster by his landlord.

My wife and I pooled our resources and found that we had enough money to have him cremated – and that’s what we did. There was no ceremony; rather it was a scattering of the ashes in what my wife considered a peaceful place.

Please understand; my wife and I are not stingy people. I was out of work at the time and my wife had the sole income. In the end, it came down to paying the mortgage or giving him a funeral like my mother-in-law’s. As a kindness, I took his cat home with me. Hopefully, that would get him to rest easier. 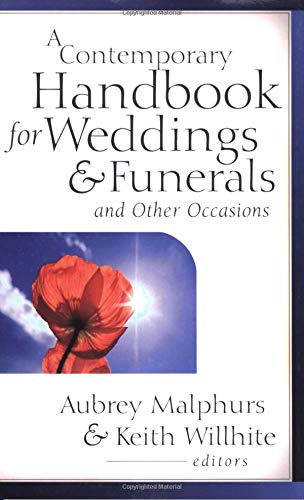 A Contemporary Handbook for Weddings & Funerals: And Other Occasions
Buy Now

The point is not necessarily to die rich or to die poor. The point is to die with some consideration.

We never know when the Grim Reaper is going to take us. For those of us who do, you have an opportunity to arrange things. It is never too early to buy life insurance. If you are a young man who is gainfully employed, there is nothing I can recommend more. With the knowledge that you’re building cash value within one of these policies, you can rest comfortably that your survivors will have less to worry about and know that the only thing they need to sweat is the actual stress of your passing.

The impression I have of my mother-in-law is much different than the one I have of my father-in-law. Being rich or being poor has nothing to do with it. I am thankful that my mother-in-law considered that her loss to my wife would be devastating. She made sure that all accounts would be closed. Any savings or tax information was properly filed and her wishes were well known.

I am grateful that my mother-in-law made her passing as stress free as she could. When I think of her, being her son-in-law, I admire her thoughtfulness and look back on the times we had with appreciation.

By contrast, my father-in-law was one of those people who would say, “Leave me out with the garbage.” He had no idea how close he came to that. He secretly believed that any talk about his death would bring it down upon him faster.

When I think about the extra stress he brought upon my wife, there is always part of me that scowls. Dealing with the grief of a parent passing and adding the financial burden as well as the legal burdens to another person says more about the deceased than he could have told the survivors. That kind of attitude says, “My death is your problem.”

Do you have life insurance?

I know that this sounds like a commercial for life insurance. I promise you, that I have nothing to gain by any of this.

I will confess that I did sell life insurance at one point as a consequence of my father-in-law’s death. My mission at the time was to make sure that no one else should go what we went through. They needed to know that this kind of preparation was not going to cost them a lot of money, if they did it properly.

I didn’t want anyone else to feel the anger I felt when my father-in-law died. It is a taint. It was one more thing. I knew my wife and I knew that if she could she would have provided a better send off.

I want to stress one thing more than anything else. Your funeral is not for you. It is for your loved ones. It helps with the closure process and the grief leads to healing. If you know that it’s going to be a hardship on your family if you die, buy more insurance. At minimum, pay your funeral expenses.

People get older. When they do the death talk is something that has to happen. You should make a will with a probate lawyer or save your money and pick up a kit at a drugstore and have it signed and notarized.

If paying the mortgage is a concern, get a policy that does that. This is all part of being an adult. If you and your spouse know that the house will be too big after one of you passes, you may wish to consider moving. A house is a big responsibility and sometimes one person cannot do it alone – especially if they’re elderly.

Whatever the circumstances are, it always pays to be prepared. In this economy, it’s rough. However, the worst thing to do is leave a love one with a lot of stress on top of the grief they are already feeling.