There was a girl in high school. We were just two girls who never ran in the same circles but one evening we happened to be sitting on the couch at a house party. I couldn't help noticing her clothes hanging loosely off her bones - her face gaunt - cheekbones too pronounced.

As the new girl I was invisible but all the kids said hi to her. Yeah, they said "hi" but that was about it. Most kept their distance but I noticed many giving her sidelong looks and talking behind their cup.

My curiosity got the better of me. I asked her, "Why don't you eat?"

She wasn't offended at all. Actually, she seemed to visibly relax a little. Her simple answer was, "It's the only thing I can control in my life." 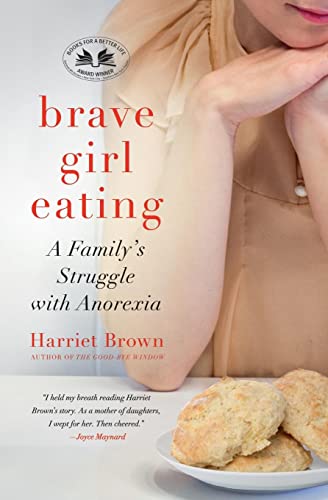 Do you know someone with an eating disorder?

Characterized by abnormal eating habits, eating disorders affect body image, overall critical health and may even cause death. What most people do not realize is: an eating disorder is a symptom of larger psychological problems.

Though more commonly associated with women, approximately 10-15% of anorexia sufferers are males, and there are indications the percentage is higher by sheer fact that men are unlikely to report having a predominantly "female" problem. (anad.org).

What is Anorexia Nervosa?

Commonly realized in young women in their teens and early 20's, anorexia nervosa is an eating disorder where the person's perception of self is distorted. What we see as skin over a skeleton, they see as an overweight image in the mirror. One might even say they suffer a phobia of getting fat.

Anorexics will find ways to achieve their goal of losing weight in various forms:

It would be my best guess to say that everyone goes through a tough, awkward time at some point in their life. Oftentimes it's at the onset of puberty when our bodies are changing, our hormones are out of whack, and we are just becoming aware of how big the world seems. Sometimes it is overwhelming.

Usually considered "the good child," an anorexic is often afraid of failure. They tend to be overachievers and perfectionists. In their quest to please everyone around them they suffer from helplessness, low self-esteem, and inadequacy. In essence, their outward persona is eating them alive.

Social pressure, home influences, difficulty in expressing their feelings, and perhaps a family history of eating disorders may trigger the onset of this debilitating and dangerous behavior.

My mother and I always had a complicated relationship. There was a sense of competition or something that I cannot quite place and never wanted to be a party to.

Being the eldest of four I always took on a "mothering" role with my younger siblings. I did what I could to please my parents and keep myself in their good graces - but sometimes that wasn't enough. When I started my menstrual cycle my mother started harping that I had the "fat American" gene from my father's side and if I wasn't careful I would be short, fat and no one would want me.

You see, Koreans are never fat! Like a good girl I would eat dinner with the family but when we were excused I would go and throw up because I wanted to be wanted and I wanted to make mom happy with me.

What is Bulimia Nervosa?

Like anorexia, bulimia has the potential to be life-threatening. Often associated with binge and purge, a person who suffers with bulimia often has out-of-control eating episodes followed by vomiting.

Though both are very serious conditions, bulimia causes additional complications because of the vomiting:

Generally symptomatic with depression and stress brought on by changes in social acceptance, a bulimic generally knows that their eating habits are bad. They maintain the appearance of average body weight but on the inside they are a mess.

An obsession with food

When I say people who suffer anorexia and bulimia are obsessed with food most people balk at the thought.

How is that possible? They don't eat!

True. But food and how it affects them is all-consuming.

No one really knows what triggers anorexia or bulimia. Far from being a genetically inherited factor, there is a higher risk of developing these disorders when a parent or sibling also has an eating disorder or obsession with image and weight.

The body can survive with near or total starvation, with sips of water, anywhere from 21 to a documented 71 days - an unfortunate achievement by Kevin Lynch of the 10 martyred Irishmen (born May 25, 1956 - died August 1, 1981).

Anorexics suffer with a skewed body image and an irrational fear of getting fat, even when they are severely underweight. Under normal or rational circumstances, we know food is necessary in order to live.

What happens when we starve

As with end of life cases, when one's body begins to shut down or fail, there is no longer a necessity for food. Many anorexics whose body mass index (BMI) have a greater chance of death if they lose 35 to 45% of their body's ideal weight but there is at least a 20% chance of death because of myocardial infarction (heart attack) and organ failure - due in part by the combination of extreme exercise and loss of BMI.

Bulimics increase their chance of death if they are not diagnosed because their excessive vomiting and abuse of diuretics may cause severe dehydration. Depending on weather and other circumstances, a body can only live up to three DAYS without water. A quick death is rare because even the short time the body has access to nutrients and sustenance, it absorbs what it can before the food is purged. This may prolong their life but still causes severe damage to their organs and bones.

Amazingly talented, Isabelle Caro, a French model and actress, bared all to make people aware of the dangers of anorexia - something she suffered since she was 13. At 5'4", she was approximately 60 pounds at the time of her death. She died November 17, 2010, at the age of 28.

Jeremy Gillitzer died June 1, 2010 at the age of 38. He was only 88 pounds at the time of his death. He began his torturous journey with eating disorders at the age of 12.

A copy of one of his final interviews can be found at City Pages under the article, "Boy, Interrupted"

As you can see, anorexia is suffered by boys and men too. In each of these instances, the common denomination is a need to please and social pressures, mixed with body image issues.

A singer with a beautiful voice, so much talent and potential. She died at the age of 32 from heart failure due to complications from anorexia nervosa. At 5'4", she was approximately 91 pounds.

Too many young people - young men and women - suffer an outrageous disorder for the sake of beauty. The mindscrew of anorexia and bulimia nervosa is very much a psychological game where life and death are the players.

There is hope though. If you know someone who if afflicted then you must advocate where they are blind to help themselves. Treatment is possible and there is a whole range of assistance depending on how advanced they are in health issues.

Sometimes inpatient care is necessary, either in the hospital or in a psychiatric ward. If caught early on, psychiatric or psychological therapy is recommended. There are also nutritionists and professional dietitians who can provide an abundance of healthy alternatives to staying fit.

A great resource for information and finding help in your local area is NEDA (National Eating Disorders Association). They have the tools and knowledge to get you back on track to healthy living in both mind and body. Don't let your mind put the screws to you!