The Problem with Gluten and Wheat

Wheat may be a bigger problem than some people realize. Wheat contains a protein called gluten that is an immunogenic anti-nutrient that increase intestinal permeability and triggers systemic inflammation by the immune system that can lead to autoimmune diseases (including Celiac Disease, rheumatoid arthritis, irritable bowel syndrome, etc.).

Gluten is in found in wheat, bread, pasta, pastries, many processed foods, and any foods made from flour. Gluten is derived from the word glue. It is what makes bread doughy and is one of the toughest proteins to digest.

Wheat gluten intolerance is on the rise. This intolerance is four times as much as what it was in the 1950s.[4] This may be due to hybridization of wheat that increases their gluten content. Or the introduction of genetically modified foods may be a contributing factor.[3]

If you have not heard of this problem, do a search on "gluten" and also on "gliadin" and "glutenin" which are components that make up gluten.

Gluten from an Evolution Standpoint

From an evolutionary standpoint, grains (such as wheat) is an recent foodstuff which humans have only started eating 10,000 years ago. Although that sounds like a long time ago, before then, the Paleolithic humans in the hunter-gather era did not eat grains. Hence our genetics has not yet evolved to handle the anti-nutrients (some say toxins) in grains.

That is why certain diets like the Paleolithic diets strives to avoid grains, legumes, and dairy which they consider to be "Neolithic" foods.

The idea is that wheat has evolved defensive mechanism to help prevent animals from eating it. That is the only way it can survive and propagate. One such deterrent mechanism is gluten which when animals eat it, some of which becomes ill. Humans can be affected to a certain extent.

And if they did eat them, they were not easily digestible such that their seeds would come out the other end intact in fecal matter at a different location in order to repopulate. In fact, fecal weight increases by 5.7 grams for every gram of wheat bran eaten [reference].

"Anti-nutrient" is a nicer word that nutritionists use rather than "toxin" -- albeit a slow toxin. Toxin means a substance which can damage an organism.

Paul Jaminet often say that wheat is the most toxic food and says that ...

"If you eat wheat, it’s probably only a matter of time before you develop some disease or other. All of the autoimmune diseases, from rheumatoid arthritis to Hashimoto’s to lupus, are made more likely by wheat consumption." [reference from his blog]

In his book The Perfect Health Diet, he writes ...

"Grain fiber has two major problems. It contains toxic proteins such as gluten, ... and it contains roughage that can injure the intestinal wall."

Dr. Kurt Harris calls wheat among the "neolithic agents of diseases"[reference]. He says excessive fructose and excessive omega-6 are the other two.

Some people believe that everyone is sensitive to gluten to some extent. It is just a matter of degree. Gluten intolerance is a spectrum. On one end, people with high sensitivity to gluten have what is known as full-blown celiac disease whose only cure is to avoid gluten altogether. It is believed that 1 out of 133 people have celiac. Other estimates it at a higher rate of 1 out of 100.[5]

Other people have a milder "non-celiac gluten sensitivity" which can not be detected accurately by any tests, but who can still be negatively affected by gluten. Accounting for these people, then about 15% to 30% of the population may have issues with gluten.[5][8]

Those With Gluten Intolerance May Not Know It

Gluten causes a wide variety of health problems with many people, most of who don't even know it. In some estimates, as much as 99% of the people with gluten issues may not be aware that the problem is due to gluten.

That is because the symptoms of gluten intolerance ranges widely and people attribute their symptoms to something else. Symptoms of gluten intolerance may include unexplained weight changes (loss or gain), digestive problems (bloating, gas, diarrhea, constipation), joints issues (arthritis, osteoporosis), mental issues (irritability, headaches, anxiety, depression, ADHD), fatigue (fibromyalgia), and potentially any number of other symptoms.[8]

"Only an estimated 1% of all suffering gluten sensitivity or celiac disease is ever diagnosed."

Her book Primal Body, Primal Mind has a chapter titled "Grains: Are They Really a Health Food?" which has an most excellent explanation of gluten sensitivity and celiac disease.

She does not believe in consuming grains, especially gluten containing grains. And anyone with autoimmune or autism issues should consider eliminating gluten. Gedgaudas writes ...

"In my opinion, it is always safest to simply assume the presence of gluten sensitivity in these populations, or, frankly, wherever significantly compromised health is an issue."[7]

The New England Journal of Medicine listed 55 diseases that can be caused by gluten. Among them are most autoimmune diseases such as rheumatoid arthritis and lupus. Gluten has also been linked to autism which is considered by some to be an autoimmune disease of the brain.[5]

Dr. Mark Hyman writes on HuffingtonPost the article "Guten: What You Don't Know Might Kill You" where he mentions how gluten can cause serious health complications for many.[5]

The HuffigtonPost title may sound dramatic, but it is accurate. And its sentiements are mirrored in the statement in the book Primal Body, Primal Mind which says ...

"Fully 99 percent of those people who have this entirely curable and potentially lethal condition are completely unaware of the dangerous vulnerability within themselves."[7]

The condition referred to is Celiac disease and the cure is 100% total abstinence from gluten for life.

Many people who have gluten intolerance may not have full blown celiac disease and may not even know they have a problem. Dr. Hyman cites a study by the Journal of the American Medical Association that people with undiagnosed gluten sensitivity has a higher risk of death.

"you don't have to have full-blown celiac disease with a positive intestinal biopsy (which is what conventional thinking tells us) to have serious health problems and complications--even death--from eating gluten."[5]

Conventional lab tests are not extremely good at catching gluten sensitivity.[7] One test for Celiac is to look at the intestinal villi of the small intestine for damage. It results in a "positive" only if there is damage in the villi. However, there are many people who have gluten sensitivity that are not at that point yet and still are negatively affected by gluten. There is antibody blood test that can also indicate gluten sensitivity. But with that too, some people still fall through the cracks.

In another post, Dr. Hyman writes that you don't even have to test positive for gluten antibodies to be affected by gluten:

"Celiac disease results when the body creates antibodies against the wheat (adaptive immunity), but another kind of gluten sensitivity results from a generalized activated immune system (innate immunity). This means that people can be gluten-sensitive without having celiac disease or gluten antibodies and still have inflammation and many other symptoms."[6] 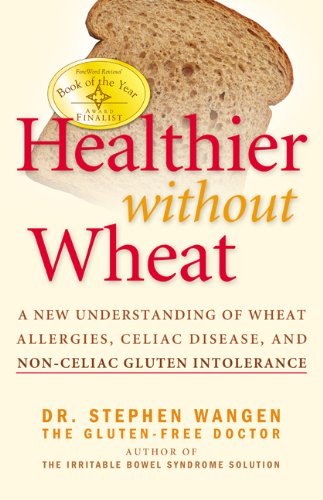 Gliadins found in gluten stimulates the release of zonulin enzyme which causes intestinal permeability. Intestinal permeability or "leaky gut syndrome" allows partially digested food peptides and toxins to leak from the gut into the bloodstream when they are not supposed to.

The body's immune system sees these as foreign materials and initiates immune response that results in chronic systemic inflammation. In this sense, gluten is immunogenic which means that it is a substance with the ability to provoke an immune response in the body.

Gluten increases intestinal permeability (leaky gut) in susceptible individuals by causing the over-expression of zonunlin which plays a role in tight junctions.

And as Chris Kresser says ...

"that increases inflammation, inflammatory cytokine production and then tight junctions in the gut open, you know like those interlaced fingers open and allow passage of antigens from the gut into the blood and then the body mounts an immune response and then you get an inflammation in the gut and everywhere else."[1]

This idea is based on on Dr. Fasano's 2006 study titled "Gliadin, zonulin and gut permeability: Effects on celiac and non-celiac intestinal mucosa and intestinal cell lines."

However, article in Next-Level-Nutrition.com question whether something else (perhaps bacterial pathogen) is involved in the increased gut permeability and mentions a study that found ...

"short-term inoculation of rats with E. coli and Shigella enhanced the ability of gluten to cause intestinal damage while inoculation with Bifidus bacteria virtually eliminated gluten’s ability to cause damage."

That is not to say that these mental health issues are always due to gluten. But gluten sensitivity should be considered whenever there is neurological, cognitive, attentional or mood-based issues.

Paper in the Journal of Neurology titled "Gluten sensitivity as a neurological disorder" says that ...

Emily Deans write in PsychologyToday that ...

"a certain subset of schizophrenics have an unusual immune response to gluten and other various wheat proteins, and in a small number, going wheat-free has been extremely helpful."

Gluten has even been implicated in autism.

"Eating a lot of wheat products isn't good for anyone, especially if you're child has developed an allergy. The connections between wheat allergy, autism and ADHD are well established."

Gluten is found in many foods

For those who are gluten sensitive, they really have to do some study as to what foods contain gluten. There are many hidden sources of gluten and this is a topic that is beyond the scope of this article.

In addition to being found it wheat, gluten is found in many grains including barley, rye, spelt, kamat, and couscous. It is found in flour and any products made from these grains. That means gluten is found in bread, pasta, pizza, wraps, cookies, rolls, pastries, and many processed foods.

Note that although quinoa, corn, millet, rice, and buckwheat does not contain gluten in its pure raw form, it is common that they have cross-contamination with gluten due to shared processing equipment, storage, or from winds blown from adjacent field with gluten-containing crops.

Whether oats are gluten-free or not is debatable. Pure oats that are grown in dedicated fields without any cross contamination from other grains may be gluten-free if they are labeled as such. However many oats have been contaminated with wheat in the growing or processing. Nevertheless, some individuals can have an reaction to oat protein known as avenin.[2] And since we cannot tell who are susceptible, most authority would advise celiac patients to avoid oats.

The labels in many processed foods will often only indicate wheat. But there are many foods that have gluten that does not contain wheat. Soy sauce, teriyaki sauces, corn products, corn starch, and many dressings and sauces for example contains gluten.

Gluten is even found in personal care products such as shampoos, cosmetics, lipsticks, hair sprays, and non-self-adhesive stamps/envelopes.[3][9]

The Canadian standard of gluten-free, is that it be less than 20 parts per million of gluten.

Article was written June 2012 and is only opinion at the time of writing. Author is not a medical professional.