What is the Purpose of Depression

NOTE: If you are in a hurry you may want to jump down to the next section about Depression from Physical Problems since that may be the main cause of depression today.

There are also different forms of depression. It takes a doctor to determine if you have clinical depression or not. Then 2 different doctors can have opposite opinions about this. It is not as clear cut as something like cancer. That is kind of a joke since they have announced that over a million people have been diagnosed with having cancer that did not have it.

When it comes to different emotions that people want to feel, depression is the most disliked emotion. For someone to commit suicide, it requires 2 things. The first is depression. The second is a strong belief that after you die, you no longer exist so you can no longer feel depression.

If someone has a strong belief that after they die, they continue to exist, then they feel that if they commit suicide, they may be feeling even worse. Now they definitely do not want to feel worse even though they may feel that it cannot be worse.

Eckhart Tolle had suffered from a severe depression for many years right up until the point that it broke and he became extremely happy or 'enlightened.' There is no mention if a doctor had diagnosed it as clinical or not. Here are quotes from Eckhart Tolle's book, The Power of Now:

Until my 30th year, I lived in a state of almost continuous anxiety, interspersed with periods of suicidal depression. It feels now as if I am talking about some past lifetime, or somebody else's life.

The most loathsome thing of all, however, was my own existence. What was the point in continuing to live with this burden of misery? Why carry on with this continuous struggle?

I couldn’t live with myself any longer. And in this a question arose without an answer: who is the ‘I’ that cannot live with the self? What is the self? I felt drawn into a void! I didn’t know at the time that what really happened was the mind-made self, with its heaviness, its problems, that lives between the unsatisfying past and the fearful future, collapsed. It dissolved. The next morning I woke up and everything was so peaceful. The peace was there because there was no self. Just a sense of presence or “beingness,” just observing and watching.

A Taxi Cab Driver Got Depressed and It Was Good!

I used to drive a cab at night on the weekends. The day driver drives from 5 AM to 5 PM. The night driver would drive from 5 PM to 5 AM. I chose that time since I am a night person or an owl instead of a lark. So the day driver (Bob) would drive until 5 PM and pick me up and drive back to his house that was about 30 minutes.

When I was done driving, I would pick him up and drive him back to my house. So this is how I knew him. He was struggling with cocaine addiction. This meant that most of the time he would go to Narcotics Anonymous meetings and not use cocaine. Once in a while he would use cocaine.

He lived with his girlfriend of many years and their teen son. He was not a nice or compassionate person. Then he had a fight with his girlfriend and she moved out. He realized right away that it was his fault and begged her to move back but she refused. So he became depressed.

Now something amazing happened. He became a nice and compassionate person. It was entertaining to see him treat people nicely. This lasted for a couple of months while his girlfriend lived somewhere else. So in his situation, being depressed made him a nice person.

Then she moved back in and his ego became more nasty than ever. He became like an Adolf Hitler. Right after she moved back in, he was driving the cab and a guy kept drifting into his lane. So he pulled his cab in front of the car so he could not go forward. They both got out of their cars and Bob kicked this guy in the chest and then got back into his cab and drove away.

Then he gets a job off of the taxi radio to pick up a woman at a hospital. He goes there and while in the hospital, he sees this guy get out of his car with a tire iron and used it to break Bob's cab window. So Bob had to pay for the window. I tell the cab owner that I cannot share the cab with Bob anymore so he assigns me to another cab.

So I feel that depression is like an attack on someone's ego. In Buddhism they say that the source of suffering is the ego. Now imagine that if Adolf Hitler got depressed and could not do anything, then there would have been no World War 2 and millions of people would not have been killed.

EPIDEMIC: In the first video below a researcher (Dr. Stephen Ilardi) talks about and shows with graphs the alarming rate that depression rates are rising with each generation! In this first video below, the speaker says:

This is covered more in the webpage below called Is the Key to Happiness Being in the Present Moment. Positive Psychology calls it the flow experience that causes you to practically stop thinking and feel IMMENSE and EXTREME peace and happiness.

Dr. Steve Ilardi earned his Ph.D. in clinical psychology from Duke University in 1995, and has served on the faculties of the University of Colorado and (presently) the University of Kansas. He is the author of over 40 professional articles on mental illness. Dr. Ilardi is a nationally recognized expert on depression.

Dr. Ilardi says: "Exercise is medicine." Studies have shown it to work at least as good as medicine for depression. I know a medical doctor that was very depressed and he said that he was successfully treating it by learning karate. At age 12 I started doing yoga, kenpo karate and tai chi.

Sometimes depression can tell someone that you need to change something physically. The famous brain doctor Daniel Amen M.D., used to treat depressed people with drugs or medications. Then his sister called him and said that her daughter is depressed but they do not want any drugs for it. So he researched it and told her to have her daughter take omega-3 essential fatty acid supplements.

Essential means that you need it since the body cannot make it. See my article Essential Supplements that talks about omega-3 in more detail and other nutrients. Everyone needs ENOUGH omega-3.

The daughter did this and within a couple of months she no longer had depression. Now Dr. Amen is famous for treating depression without drugs or medications. He says that soccer players should never hit the ball with their head. He wrote the best selling book, Change Your Brain, Change Your Life.

I know a woman that was very depressed for about 2 years. She heard about eating an all raw food diet. She tried it and her depression went away. That was many years ago. Now she is married and has a child and still eats a raw food diet.

Her name is Debbie Pierce and I have pictures of her on my article called Does a Vegan Diet Cause People to Look More Beautiful. This article has lots of pictures of beautiful women that I know. Many people have have been healed of depression and many problems from a raw plant-based diet.

There was a very intelligent Catholic woman that got depressed. She was very depressed for about 2 years but did not get medical help for it. For this article I will call her Cathy since she is Catholic. Now my friend invited me to spend Easter day with her and her best friend Cathy, that I had never met before.

After spending all day with Cathy, her depression was gone and did not come back. She then became my girlfriend for 4 years. She is married now and has a child.

Dr. Martin Seligman is an expert on depression. He spent years researching it including creating depression in laboratory animals and curing it. He was elected president of the American Psychology Association by the largest margin ever.

He even wrote the college textbook on psychology that many were using. Now he is director of Positive Psychology. It studies how people can be happier. He has written many books. For more on Positive Psychology, the teachings of Eckhart Tolle and more see my article, Is the Key to Happiness Being in the Present Moment.

A 2011 Book by Martin Seligman PhD 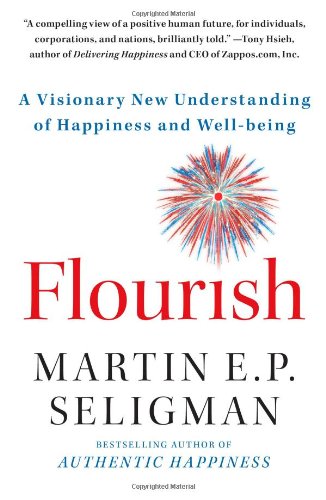 Flourish: A Visionary New Understanding of Happiness and Well-being

With this unprecedented promise, internationally esteemed psychologist Martin Seligman begins Flourish, his first book in ten years—and the first to present his dynamic new concept of what well-being really is. Traditionally, the goal of psychology has been to relieve human suffering, but the goal of the Positive Psychology movement, which Dr. Seligman has led for fifteen years, is different—it’s about actually raising the bar for the human condition.

Depression is a disease of civilization: Dr. Stephen Ilardi at TEDxEmory

The Depression Cure: The 6-Step Program to Beat Depression without Drugs

In the past decade, depression rates have skyrocketed, and one in four Americans will suffer from major depression at some point in their lives. Where have we gone wrong? Dr. Stephen Ilardi sheds light on our current predicament and reminds us that our bodies were never designed for the sleep-deprived, poorly nourished, frenzied pace of twenty-first century life.

Inspired by the extraordinary resilience of aboriginal groups like the Kaluli of Papua New Guinea, Dr. Ilardi prescribes an easy-to-follow, clinically proven program that harks back to what our bodies were originally made for and what they continue to need. The Depression Cure program has already delivered dramatic results, helping even those who have failed to respond to traditional medications. Uses TLC-- therapeutic lifestyle change.

A New Earth by Eckhart Tolle