Scabies, often referred to as “The Seven Year Itch,” is a highly contagious skin disease caused by the Sarcoptes scabiei, a parasitic mite. Contrary to what many believe, it is not a disease that is limited to any class of people. It knows no bounds and is merciful to no one. Rich, poor, young, old... all are within danger of contacting it. Though commonly spread by intimate activities, it can be spread by a casual handshake. I know of a man who actually picked it up at a hospital!

Once a mite gets on a person, it can take anywhere from two weeks to two months to realize one has been infected. Tell-tale signs include intense itching, often at night. Sometimes you can see thin, what looks like pencil mark lines between the bumps, but many times you cannot. The scabies themselves, cannot be seen. However, at the beginning of the infection you can see that the bumps are in a definite line pattern. The rash often first appears under arms, on the abdomen, on the wrists, between fingers, on the thighs, on the ankles, and between toes. Later on, there may be no pattern to the rash and it can cover huge areas of the body. Sometimes the skin will get scaly looking, especially between the toes. Itching is unbearable and coupled with burning and pain.

Unless you have ever had scabies, you have no idea what the scabies victim is going through. Many nights he cannot sleep because of the intense itching. It is hard not to scratch and the individual will often claw at his skin causing it to bleed. It is so important not to scratch, both to prevent secondary bacterial infections and scarring; but it is also next to impossible not to. The extreme discomfort and lack of sleep can lead to depression, so this is something one needs to be on the look-out for.

Common medical treatments for scabies include prescription strength permethrin cream. This is the same thing that is sold as over-the-counter lice treatments, but in a 5% solution instead of 1%. Lindane is sometimes used as well. Creams must be applied over the entire body. For the stubborn case, which is resistant to creams, a doctor may prescribe Ivermectin, to be taken by mouth, along with another round of the skin cream. Unfortunately, not only do these not always work, but they can lead to many side effects, including cancer and sterility.

Though it is still just as hard to get rid of the scabies, there are natural methods. Frequent warm baths with epsom salt can be very beneficial. Baths with a cup of bleach added to the water has been known to kill scabies, but you must be very careful if your skin is sensitive. Tea tree oil and neem oil have both been found to be effective remedies. Other essential oils which may work are lavender and peppermint. Sulfur soap and lotions can get rid of scabies too. A fairly easy sulfur remedy is to add olive oil to sulfur, to spread on the skin. The above listed essential oils can be used by themselves or added to olive oil, either singly or in combination. Though a bit harder to find, adding essential oils to raw Shea butter makes a soothing and thick, protective lotion. 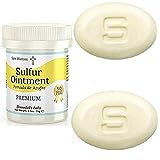