Why Exercise is Important: The Tao of Balanced Energy

The tao (or path) of balanced energy is about keeping your body in harmony. Optimal functioning requires a balance of nutrition, exercise and spirituality. This path is explained in a series of three essays. The first essay, The Tao of Balanced Energy: Nutrition, Exercise, and Spirituality focused on nutrition. This essay focuses on exercise. The last in the series focuses on spirituality (mindfulness) and achieving spiritual harmony.

The Tao of Balanced Energy

Why is exercise so important?

Everyone knows that physical activity—exercise--is good for you. However, very few people realize that being physically active is the single most important thing we can do to improve or maintain our health. Without physical activity, the body loses its strength, stamina, and ability to function well.

And, of course, it helps you to lose weight and maintain a healthy weight.

Exercise Improves Health in Many Ways

How does exercise have all these beneficial effects?

Why exercise has so many beneficial effects on health is not very well understood. Here are some of the reasons exercise “works.”

Exercise increases your oxygen intake and makes your heart beat faster. This means more oxygen and nutrients are delivered your tissues, and your cardiovascular system works more efficiently.

The extra oxygen in the brain is the reason for reduced anxiety and tension, the alleviation of depression, and improved cognitive function.

Exercise improves the function of the lymphatic system.

The lymphatic system begins with the production of lymphatic fluids in the lymph nodes. This fluid bathes our body’s cells and carries the body’s cellular toxic waste away from the tissues and into the blood. These toxins are carried by the blood into the body’s two main detoxification organs--the liver and kidneys. The lymph nodes also produce the white blood cells which fight bacteria and infection.

Sweat is another way in which toxins are removed from the body.

Our genes are not our destiny. There are body processes which turn the genes on or off. This is done by a process called “methylation”—a cluster of carbon and hydrogen atoms attach themselves to a gene and make it easier or harder for the gene to become ‘expressed.” The gene is unchanged, but the behavior of the gene is. Physical activity can inhibit the expression of “bad” genes.

Physical activity helps increase the length of telomeres, the tiny caps on the end of chromosomes in each of your body cells. When a cell divides, telomeres shorten and fray. When they become too short, the cell stops dividing and dies. Exercise can maintain telomere length extending the cell’s life span.

Exercise can actually remake the brain, thereby improving cognitive function and memory. It can reverse the slow wasting away of the brain which begins around the age of 50.

A Rebounder Stimulates the Lymphatic System 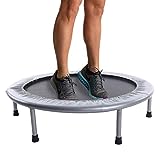 Stamina 36-Inch Folding Trampoline | Quiet and Safe Bounce | Access To Free Online Workouts Included | Supports Up To 250 Pounds
Use a rebounder to help move lymphatic fluid through your body. They also come with a hand rail, if you need something to hold on to for balance while jumping. I like to jump while watching TV or out on my porch.
Buy Now

Exercise Can Help with Weight Control

How can exercise help with weight control?

When it comes to diet, a calorie is not just a calorie. You could eat 2000 calories worth of gum drops or 2000 calories of health-promoting foods that supply the correct balance of protein, carbohydrate, fat, vitamins, and minerals the body needs for healthy functioning. (Hint: Gumdrops is not the way to go.)

If you want to lose weight, dieting alone will not get you there. You need to add exercise. The reverse is also true.

Exercise on a Daily Basis

How much exercise do you need?

Exercise aids in weight control not just because it burns calories, but because it revs up the metabolism. Exercise in the morning, and you will burn more calories throughout the day. You need, at a minimum, 30 minutes of vigorous exercise or (60 minutes of moderate exercise) 5 to 7 days per week.

The exercise should cause you to break a sweat and make your heart beat faster. Moderate exercise means that you can talk but not sing. Vigorous exercise means you can’t carry on a conversation, but can talk in short phrases.

If you can’t do the 30 minutes all at once, you can break it up into three 10-minute sessions. Ideally, you want longer sessions because you want to push your body almost to its limits.

If you are ill, very overweight, or older, you should discuss your exercise regime with a medical professional before starting. If you are very overweight, start slowly—just take a walk a few times a day—and gradually add in more intensive exercise and longer exercise sessions. You should do both aerobic (running, jump rope, biking, swimming) and resistance training (weightlifting) for a balanced workout.

It takes a lot of exercise to burn off calories which is why a weight control regimen must include both diet and exercise.

This chart shows the amount of calories burned with various activities in 30 minutes.

People who think they have no time for exercise will sooner or later have to find time illness.

Why should you monitor your weight?

It is easier to lose 5 pounds than 50 pounds. So don’t let a 5-pound weight gain turn into a 50-pound weight gain. If you are at your goal–weight, weigh yourself on a reliable scale at least once a week. Write your weight into a log. If you see that you have gained 5 pounds, decrease calories and increase exercise until you are back at you goal weight.

Find a Way to Add Exercise to Your Day

How can you work more exercise into your day?

If you can join a gym, swim laps in a pool, or play sports on a regular basis, that is great. If not, there are plenty of ways to work exercise into your day.

I prefer to work out at home. I have a stationary recumbent bike with an electronic display that keeps me motivated. I alternate the bike with weight-training using dumbbells. I use my rebounder a couple of times a week. Some people find it more motivating to work-out at a gym or to take classes, like yoga or tai chi. Others enjoy participating in a team sport like basketball or tennis. The activity doesn’t matter just as long as you do something.

Why do you need “intermittent movement”?

Sitting for long periods of time reduces health and longevity even if you are engaging in a regular fitness program. “Intermittent movement” is required. You simply need to stand up every 15 minutes or so. Get up from your chair and stretch. Take a phone call or sort the mail while standing. Just try to get into the habit of getting on your feet every 15 minutes.

Can exercise help if started later in life?

It doesn’t matter when you start to exercise. Even if you have been sedentary all your life, you will benefit from an exercise program. Studies have shown benefits even among people who start exercising in their 70’s, 80’s and 90’s.

Exercise is especially important for women after menopause because hormonal changes cause metabolism to slow and muscle mass to decline at this time of life.

Some studies have shown that a habit of regular moderate exercise increases life expectancy by 4 to 5 years.

How to Exercise with Weights

The Tao of Balanced Energy

I welcome your comments. Please share your thoughts on this topic.