In the course of my medical transcription over the last year or so, I’ve been hearing about this new technique and decided to do more in-depth research on the subject – it is called therapeutic hypothermia.  What is it?

It is a medical treatment that lowers a person’s body temperature in order to reduce the risk of injury to tissues and organs following a period of insufficient blood flow – such as in the case of heart attack or stroke.  It also is being used in treating neonatal asphyxia (lack of oxygen before birth), traumatic brain or spinal cord injuries, and neurogenic fever (when a patient has an abnormally high fever associated with any of the above events).

On researching this topic, I found myself fascinated as so much of it makes sense. Even as far back as Hippocrates (the guy who the Hippocratic Oath happens to be named after) realized that packing wounded soldiers in snow and ice seemed to create a better outcome. A surgeon who served under Napoleon also found that injured soldiers ‘pampered’ by being placed closer to the fire had far worse outcomes than lower ranked infantrymen who were left in the cold - literally.

The first medical article published about hypothermia as a treatment was published in 1945. This had to do with patients specifically suffering from head injury. Then in the 1950s, hypothermia was used in an aneurysm surgery on the brain to effectively create a bloodless field so they could operate. However, the early research focused on deep hypothermia (defined as body temperature 20-25 degrees Centigrade which is 68-77 degrees Fahrenheit).

They began to investigate milder forms of hypothermia (32-34 degrees Centigrade or 90-93 degrees Fahrenheit) in the 1950s. By the 1980s, animal studies were showing that there were neurologically protective properties following blockage of blood flow to the brain by mild hypothermia.

Then 2 human studies were done in 2002 by the New England Journal of Medicine. These both occurred after cardiac arrest. In 2003, the American Heart Association endorsed the use of therapeutic hypothermia following cardiac arrest. Researchers have gone so far as to claim that hypothermia is a better neurological protectant following blockage of blood flow than ANY KNOWN DRUG.

WHAT SITUATIONS ARE APPROPRIATE FOR HYPOTHERMIA THERAPY?

This basically falls into 5 categories so far which include:

HOW DOES THIS WORK?

Hypothermia as used in the case of neonatal asphyxia – whole body or head cooling is performed to 33-34 degrees Centigrade (90-93 degrees Fahrenheit) - begun within 6 hours of birth and continued for 72 hours – significantly reduces mortality and reduces risk of cerebral palsy and neurological defects in surviving infants.

Hypothermia used in cardiac arrest – in patients who were resuscitated within 5-15 minutes after collapse and hypothermia begun within 2 hours or less – patients cooled over a 24-hour period and to 32-34 degrees Centigrade or 90-93 degrees Fahrenheit – half of the patients experienced favorable outcomes and the standard group had a 39% recovery rate. Another study, however, returned the same result in that 50% of the patients recovered but only 25% of the patients not treated with hypothermia protocol recovered.

Of note – 300,000 Americans suffer cardiac arrest per year. The further stat is that only 10% ever leave the hospital alive. This is in spite of faster response times, automated defibrillators, and CPR techniques.

Hypothermia in stroke is limited and mostly confined to animal studies. It does not seem to be effective in hemorrhagic stroke (bleeding on the brain). However, there seems to be evidence that hypothermia lowers the body temperature to reduce intracranial pressure and can thus prevent further brain damage by allowing the tissues to heal.

Hypothermia in traumatic brain and spinal injuries is also in the animal investigational stages but it is showing promise in preventing the secondary effects that occur from severe trauma to the brain or spinal cord – for the same reasons cited above.

Hypothermia in fever associated with the above entities is showing promise in that the higher the temperature in the patient, the more damage occurs to the brain and body in general. In a patient with either brain trauma of any kind or ischemic brain injury combined with a fever, the mortality rate goes up 14% higher than patients with normal temperatures.

How Is Hypothermia Performed?

Cooling catheters can be inserted into the inferior vena cava by inserting into the femoral vein.  Cooled saline solution is circulated through a tube or balloon and the saline cools the patient’s entire body by cooling the blood as it passes through the heart.  Conversely, the catheter method can raise the patient’s body temperature if it begins to dip too low.

Adverse effects of this method are the usual associated with an invasive procedure – bleeding, infection, arterial puncture and blood clots.  Infection can be deadly in patients already compromised by the original insult.  Bleeding can become a problem because the patient has a decreased threshold due to lowered temperature.  This method can also lead to development of blood clots and thus cause pulmonary embolism (blood clots to the lung).  This method also requires a specialist to insert the catheter via the femoral vein and may cause a delay in cooling the patient while waiting for a provider.

It is also necessary to sedate patients receiving therapeutic hypothermia to prevent shivering, as this is a natural body response to the drop in body temperature.

With this method, cool water circulates through a blanket.  If a person needs their body temperature lowered, the blankets have to cover 80% of the patient’s surface area.  They can add ice packs to achieve a faster temperature lowering.  This method is primarily geared at lowering the patient’s skin temperature and requires no invasive procedures.  The down side of this method is that the water blankets can leak and there is always a danger there with other electrical equipment.  They also lower the body temp at a slower rate than other cooling methods.  The temperature has to be measured by core temperature probes inserted into the body (usually rectally) and then adjustments in the blanket temperature have to be made.  They can also quickly go beyond the target temperature and this can likewise lead to spikes for instance in intracranial pressure.

This is a medical device that induces hypothermia non-invasively.  This is done by gel conductive pads which cover 40% of the patient’s surface area (as opposed to 80% with the water blankets).  These pads circulate temperature-controlled water and modulate the patient’s temperature by about 1.5 to 2 degrees per hour and this apparatus seems to be devoid of all the side effects of the other methods.  The most important point of the Arctic Sun device is that it is showing promise in testing because it is able to achieve the same goals as the more invasive cooling catheters, with even more accuracy in achieving the correct core temperature over an accurate timeframe.  It can be delivered much faster because there is no need to wait for a trained physician to begin the treatment.  Cooling catheters require a physician to insert them and generally on average, there is at least a 60-75 minute delay before treatment is begun.  The Arctic Sun device can be applied immediately upon a physician’s order – he does not have to be present to get things going.

One facility in Reno, Nevado has published a study illustrating the benefits of this new technique.  In this case study they cited as well that 90% of persons suffering a cardiac arrest never reach the hospital alive.  They also cite that recovery correlates with body temperature.  They also go on to say that the lower the body temperature is after the event, the greater the possibility for neurologic recovery.  Hypothermia decreases the metabolic rate by 6-7% for every decrease of 1 degree Celsius in temperature.  Hypothermia also decreases intracranial pressure.  ACLS protocols are now advocating therapeutic hypothermia as the treatment of choice if the patient is unresponsive but has adequate blood pressure.

In their case study, they give the example of a 56-year-old male smoker with diabetes who suffered a cardiac arrest.  CPR was not performed until paramedics arrived and his first pulse was detected 17 minutes after CPR was begun.  He was begun on therapeutic hypothermia protocol within 20 minutes after arrival to the Emergency Room.  He was treated with body surface cooling pads for 22 hours – the target hypothermic temperature was achieved 6 hours into treatment.  He was begun to be rewarmed at 22 hours rather than 24 hours because he was showing signs of awakening.  Six hours after rewarming began, he was responding and 2 hours after that, he was responding to pain.  The following morning, which would have been about 12 hours of normal body temperature, he was opening his eyes to commands and moving.  By day 5 after his cardiac arrest, he was able to follow simple commands.  By day 6, he was being treated with physical and speech therapy because of some slowness in his responses.  However, by day 11, he had NO neurological deficits.  He was discharged home on day 12 and was able to return to work and full function several months later.

It may sound like it took him a long time to recover, but if you consider that he was in fact DOA when his cardiac arrest occurred, this was a miracle treatment!  I think there is still much research to be done on this method of treatment in these 5 case scenarios, but at least as far as cardiac arrest is concerned, it has now become the question of why WASN’T hypothermia protocol initiated rather than why was it?  It is showing that much promise in the treatment of cardiac arrest and we can only hope it will be further tested to include the other 4 areas and show as much promise! 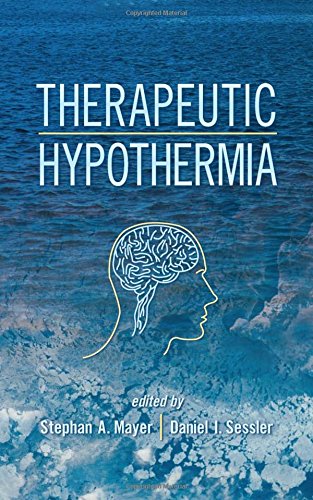