Causes of Hangover and Its Effects on Your Liver

Alfred is a long-time teacher and computer enthusiast who works with and troubleshoots a wide range of computing devices.

You will know you have hangover when in the morning after alcohol abuse, you wake up feeling like hell and exhibiting the following symptoms:

Health experts still disagree on the exact quantity of alcohol that should be taken in order to avoid abuse. As a rule of thumb though, keep the number of beer bottles to a minimum if you want to stay healthy the next morning.

Another angle to consider is that some people develop hangover much faster than others. This is due to differing genotypes, which affects how different body types go about metabolising alcohol.

Over indulgence in alcohol is made worse by dehydration, bad eating habits, sex type, congener and mixing of alcohol with energy drinks.

Alcoholic drinks contain numerous impurities that are by-products of fermentation and preservatives.These impurities help trigger hormonal imbalance in the brain, during and after alcohol abuse.

One such hormonal imbalance is the interference in the workings of the anti diuretic hormone (ADH), which regulates body hydration while controlling flow of urine from the body.

After failing to regulate water in the body, a malfunctioning ADH will pave way for kidneys to send water directly to the bladder, instead of re-absorbing it into numerous body organs. We all know that water is immeasurably important to our bodies. So lack of it is definitely catastrophic.

The frequent urination that is a follow up to maimed ADH, will mean less water to the brain too, affecting its functionality.

It is important to remember that the brain consumes approximately 20% of fluids in the body, and the reduction in the quantity of water is catastrophic. This will lead to unpleasant pressures within the skull, leading to pain in the head.

Also of note is that once consumed, alcohol takes a matter of seconds to reach the brain, triggering the ADH malfunction.

Failure to re-hydrate the body sufficiently just before going to bed will also hasten the rate of alcoholic absorption into the bloodstream. 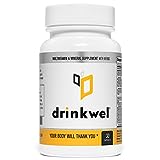 Women are more likely to experience the effects of alcoholic abuse much quicker. One reason being that the female body contains less water than the male counterpart, hence hastening the inability of the body to dilute huge amounts of alcohol in the stomach. Women also have less dehydrogenase, a liver enzyme that helps break down alcohol much faster.

Light weight and shorter men are also more likely to experience hangover to the bitter end compared to the heavier folks. The body weight will determine the surface onto which absorption of alcohol takes place. Someone with a narrower stomach lining will have problems containing and absorbing continuous flow of alcoholic drinks.

The effects of alcohol abuse will turn you into a hangover wreck, especially if you have not eaten well in advance.

If you drink before eating well, the alcoholic content will quite easily find its way around your system meaning that lack of food in the stomach will increase alcohol absorption into the bloodstream.

One recommended habit is eating fatty grills before engaging in a drinking spree! Fats will take hold of your stomach linings thereby giving less room to alcohol from getting absorbed. This may just lessen the symptoms of hangover.

Remember not to indulge in further fatty foods in the morning following reckless drinking. Other than helping, you will only be adding to the irritation in the stomach.

In order to give different color and make your drink taste better, a type of impurity called congener is added to some brands of alcohol during fermentation.

Though research is not as conclusive, the bare facts and experience indicate that congener indirectly contributes to the severity of intoxication and hangover.

An alcoholic beverage with a higher dose of congener will manifest in dark colors.

And so, the darker the beverage the more severe the hangover side effects:

Energy drinks are increasingly becoming popular in parties and drinking sessions, and amongst college students.

Though well intended, energy drinks are made up of stimulants to keep your body alert, when fatigue begins to crop in.

But again, fatigue is a natural way the body is speaking to you, requesting you to rest.

Some party goers take energy drinks in addition to alcohol in order to fight fatigue.

Though not necessarily intoxicating, energy drinks will excite your body into lasting for longer hours into the night, and therefore leading to alcohol abuse.

Alcoholic Damage to Your Liver

If alcoholic beverage is your bread and butter and you take it with abandon, then you will be warming up for a lot of trouble the morning after and killing your liver slowly thereafter.

Once absorbed into the body via the stomach and intestines, alcohol is meant to be metabolized by enzymes in liver.

Liver is the biggest organ in the body and is responsible for breaking down food into energy. It also helps eliminate waste from the body.

Because of uncontrolled alcoholic absorption, your liver struggles to metabolise alcoholic beverages into usable energy, leaving the fatty cells redundant. These fatty cells will accumulate and thus degenerate into what is called fatty liver.

The condition will make it hard for oxygen and nutrients to move freely in the cells, causing them to die. Continued heavy drinking will impact on liver even further as dead cells accumulate, leading to liver failure in the long run.

In addition, the impurities of alcoholic beverages are causative of damages to the intestines, which in turn generate bacteria that get transmitted to the liver.

External toxins and impurities to the liver will lead to scarring and inflammation.

Worth noting is that metabolism of alcohol takes much longer than usual given its impurities. Liver will take approximately one hour to metabolize 12 ounces (a standard bottle) of beer.

This implies additional hour of metabolism for every additional beer bottle consumed. When you abuse alcohol by consuming too many bottles you are giving liver equally too many hours to accomplish its task.

Damage to liver may not be immediate but when symptoms finally show, it may be a little too late.

Do you ever fear for your liver whenever you are abusing alcohol?

How To Know If Pain In The Liver Is Alcohol Related