When is Cancer Awareness Month?

With all of the worthy causes competing for attention today, have you asked yourself, “When is Cancer Awareness Month?”  Well, there is no single answer because it is actually based on the type of cancer you might be wondering about. And there are so many types of cancer diagnosis that it can be hard to keep track of.  Here is a compiled list of the different types of cancer and their associated awareness month.

January is Cervical Cancer Awareness Month. It is estimated that about one in every 150 women will be diagnosed with cervical cancer in their lifetime. The most common cause of cervical cancer is the infection of the cervix by the human papillomavirus-which causes abnormal tissue growth. The good news is, if it is caught early enough, there is over a 90% survival rate.

Colorectal or Colon Cancer Awareness Month is March. Colorectal cancer is a leading cause of cancer related deaths in the United States. Colon cancer has yet to be linked to any single cause; however, risk factors include high red meat diets, colorectal polyps and family cancer history. As with many other types of cancer, early detection can actually lead to a complete recovery.

April is National Cancer Control Month, which is probably as close as we get to the full spectrum of cancer awareness in one month. The thrust of Cancer Control Awareness Month is to educate the public on the advances and research developments in the fight against all types of cancer. It is also a time to promote habits that are believed to help reduce the threat of cancer.

Skin Cancer Awareness Month falls in May. Skin cancer is a predominate cause of cancer among people in the United States and is linked to a variety of risk factors such as skin complexion, age and over-exposure to sunlight. Skin cancer is easily treated in most cases, but if left uncontrolled, could easily spread to other body tissues and organs and become fatal.

June is Men’s Health and Cancer Month. This month mainly, but not exclusively, focuses on prostate cancer which affects approximately 192,000 men each year. Other forms of cancer among men include testicular, breast and penile cancer. Prostate cancer is actually the second leading cause of cancer-related deaths among men.

July is Sarcoma Awareness Month. Sarcoma, also known as cancer of the bone, is a very rare disease that affects about 13,000 people in the U.S. each year and is evenly split between men and women. Sarcoma is actually a cancer of the connective tissues which can include nerves, cartilage and muscle, as well as bones. It is hard to detect and is often misdiagnosed, making Sarcoma Awareness Month that much more important.

Ovarian Cancer Awareness Month is reserved for September. Every year, about 22,000 women are dignosed with the disease and close to 14,000 in the U.S. will die from it. If this disease is caught early enough, there is a 93% survival rate. September is also Leukemia and Lymphoma Awareness Month. Leukemia is a cancer of the blood and affects young and old alike. Researchers still don’t have a good idea of what really causes the disease, but it appears that genetics and environment play some role.

October is Breast Cancer Awareness Month and has gotten plenty of attention lately thanks to high profile organizations like the National Football League and celebrity focus. The color pink has become synonymous with breast cancer awareness and many companies support the cause by producing merchandise specifically for awareness. Over 200,000 women are diagnosed with breast cancer each year and the disease claims the lives of about a fifth of them.

Pancreatic and Lung Cancer Awareness Month is November. Pancreatic cancer is a devastating cancer that is extremely hard to detect due to the location of the pancreatic organ. Though pancreatic cancer does not strike the numbers of people other forms of cancer does, it has a high mortality rate of about 85%. Lung cancer causes more deaths in the United States each year than any other type of cancer, affecting slightly more men than women. Smoking is considered the leading factor in developing lung cancer, however, about 10 percent of victims are non-smokers. 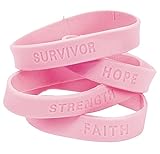