Why Am I Over Eating?

Why Am I Over Eating and why am I overweight? This is a basic question that millions of us wake up to on a daily basis. The solution might be as simple as knowing the difference between our body's response to the consumption of food and drinking of water and knowing the difference between "fluids" and "water". We need to realize WHEN we are thirsty and we need to know exactly WHAT to drink.

The feelings of thirst or hunger originate from the recognition of low energy levels by the central control system of our brain. The front of the brain either gets energy from hydroelectricity (energy formation from water) or from sugar during blood circulation. Even though its functional needs for hydroelectricity are more urgent we do not recognize thirst and assume both indicators (thirst and hunger) to be the urge to eat. Frequently, we eat food even when the body should receive water.

The brain consists of roughly 2% of our body weight with trillions of nerve cells that are 85% water. About 20% of blood circulation is made available to the brain. Along with the heart, the brain is an exclusive organ within our body that is constantly active, even when we are sleeping. It processes information from different parts of the body as well as external information, daily. In order to process all of these inputs, the brain requires an enormous amount of energy. The brain uses two sources for its energy requirements. It metabolizes food to form sugar and processes its water supply to form hydroelectric energy.

The dependence of most brain functions on energy from sugar has resulted in a pleasure association when tasting something sweet. During stress the body becomes dehydrated. A less disciplined person will give in to eating more often and in greater quantities. Thus, the seriousness of overeating becomes more pronounced if we do not recognize the thirst signals of the body when it needs water for its energy supply. The reason why we tend to gain weight is very basic: We EAT to supply the brain with energy for its constant daily activities. However, when food is eaten, only about 20% of it is used by the brain. The remainder will be STORED (usually where we want it the least), if our muscle activity does not use up its allocated portion. In contrast, when we drink water as a source of energy, the remaining supply is passed out as urine.

WHAT we drink is also an important piece to the puzzle that explains our overeating habits.

The word “Diet” used with sodas doesn't mean no calories. If you still want to drink diet soda, consider that the “no calorie” claim doesn’t really mean “zero calories.” Although diet sodas that contain aspartame may be labeled as “calorie-free,” aspartame is broken down in the body into methanol and amino acids, which produce calories. The caloric content is minute enough for beverage companies to list as “no calorie” (less than five calories per labeled serving, according to FDA standards), but be forewarned that drinking diet soda in excess will definitely add extra calories to your diet.

Also, Diet sodas, even though they contain no significant number of calories could be the cause of more weight gain in those people who drink them as part of a weight loss program. There is a wide assumption that sodas and diet sodas can replace the needs of the body for water. It is assumed that just because these beverages contain water the body will be properly hydrated through them. These assumptions are dead wrong! An increase in consumption of primary caffeine-containing beverages can be traced to many of the health problems in our society today. The erroneous belief that all fluids are equivalent to water for the water needs of our body is the main cause of many of the health issues we have including excessive weight gain.

Caffeine, one of the main components of most sodas is a diuretic. It is addictive because of its direct action on the brain. It also acts on the kidneys and causes increased urine production, resulting in dehydration. Dehydration will cause a person to drink more cans of soda without being satisfied. At the same time, most people confuse their feelings of thirst, thinking they have consumed enough water, after drinking several cans of soda. Due to our brain's failure to recognize the difference between the thirst and hunger sensations ( as discussed above) we then begin to consume more food than our bodies need. For this reason, dehydration, caused by sodas that contain caffeine can result in weight gain over a period of time.

Caffeine is an addictive drug, the use of which has become legal. It is very sad to realize that children can become vulnerable to the addictive properties of beverages that contain caffeine. The stimulation of the body at a very young age with pleasure-enhancing chemicals can result in using harder addictive drugs or overeating later on in life.

Why Am I Over Eating?

#1 - Our brain confuses thirst for hunger

#2 - It can be said that the long term and constant use of sodas in general, and diet sodas in particular, can be assumed to be responsible for more serious health problems and over-eating

When muscles are inactive, they are more easily attacked, and their protein is broken down for conversion into sugar. However, If muscles are used, they begin to metabolize some of the stored fat as a choice source of energy to do work and maintain or increase their bulk.

Walking, as a form of exercise can be very helpful in eliminating excess fat and increasing muscle health. Repeated walks increase the activity of fat-burning enzymes. Increased water intake will give more energy and stamina, and walking stimulates the enzymes that clear our arteries and decrease fat.

A Clean Tip To Prevent Over Eating

References: YOUR BODY'S MANY CRIES FOR WATER by F. Batmanghelidj 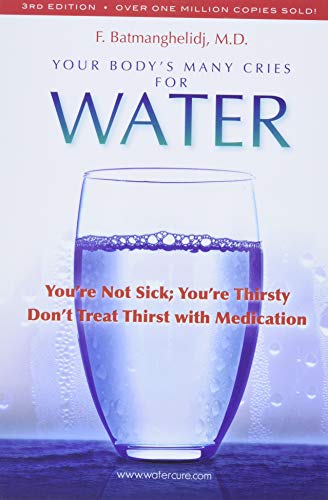 Your Body's Many Cries for Water
Buy Now

When Do You Over Eat?