There are four kinds of brain waves, indicated by the frequency of the waves. Here they are from fastest to slowest.

Beta brain waves - A state of heightened activity. This is the brain frequency you operate at when your out and about or doing your daily tasks. It's the frequency of rational and analytical thought.

Alpha brain waves - Awake, but relaxed. Also where you dream when asleep and daydream. You also experience this right as you fall asleep and right as you wake up naturally (without an alarm clock). If you've ever remembered something really important, or experienced a Eureka! moment as you fell asleep or woke up, then you've experienced the benefits of being in alpha state.

Benefits of Alpha Brain Waves (brain photo beside it)
So what are the benefits Alpha waves and being in Alpha state?

You learn faster and are more receptive to information in alpha state, (which is great for studying or concentrating).

Alpha state is ideal for problem-solving, because you can see the grand scheme of things, which allows for big-picture thinking.

Your creativity increases in alpha state.

Alpha waves are great for your health, because being in alpha state means you are relaxed.

Alpha brain waves increases your intuition, which helps you not only with making decisions, but also can keep you from harm and can even lead you to unforeseen opportunities. 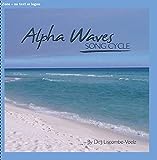 Certain movements of Baroque Classical music have been shown to induce Alpha state, particularly pieces from Bach's Cello Suites, the Largo from "Winter" from Vivaldi's "The Four Seasons," and music by Handel and George PhilippTelemann.

The music tempo of these pieces relaxes you and slows your brain down to the optimal frequency to reach alpha state. It stimulates alpha waves in both the left and right hemisphere of brain, which allows you to access intellect and creativity together.

Try listening to some CD's while you work, to stimulate alpha waves.

Yo Yo Ma Plays Some Alpha Wave Music from Bach

The so-called "Mozart Effect" refers to research from the 1990's that shows listening to Sonata for Two Pianos in D Major K448 can improve cognitive performance. As a result, a whole industry cropped up around classical music for babies.