There are lots of motives to ride your bike during those hours when the sun goes to sleep. The more common it is the fact that daytime becomes shorter during winter months leaving less time to ride your bicycle with natural light.

But it is also true that if you live in a country where summer also brings high temperatures then you probably choose to ride your bicycle at night when it is less hot. At least that is what I do here in Portugal.

Many would say that it is enough dangerous to ride bicycles during daylight and that there is no need to risk our life trying to pedal at night. Personally I do not agree with them.

Of course you have to pay even more attention and you should make yourself well seen by others but there are no reasons to stop you from enjoy the feeling of riding your bicycle with the help of artificial lights.

The best way to be well seen during night rides it is to have both headlight and taillight and always wear bright cloths preferably reflecting ones.

Which bike light is the best for me?

Knowing that bicycle lights have two aims: make the cyclist visible to others and allow the cyclist to see the road ahead, it is important to understand what kind of lighting system fit you better.

If you only ride on illuminated public roads you will probably need just enough light to allow other road users to see you. But on the other hand if you commute and ride on secondary roads or if you want to make some off-road mountain bike rides at night then you should consider a better lighting system which will illuminate your track and all the obstacles that you will encounter.

Nowadays there are several kinds of lighting power systems, from the simple and economical dynamo (generator) which is the best choice for most commuters, to the batteries powered lights that can go from simple presence lights to very bright and powerful lighting systems.

There are also different types of lamps namely tungsten filament, halogen and light-emitting diode (LED). The first one it is used on the cheapest bicycle lights and their high energy consumption and poor brightness level make them antiquated if compared with the other options.

Many bicycle lights using LEDs are only suitable for either being seen or emergency use, but with the rise in performance from recent LED lighting systems it is likely that such LED systems will become much more popular in future.

For those who need extremely bright light systems the best solution is the high-power high intensity discharge (HID) light, which are very expensive and requires special electronic equipment and a powerful battery. 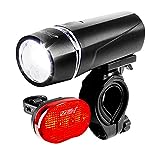 The days of high priced bike lights are over!

At the same time dynamos were developed and started to generate energy from the bicycle's own movement. Dynamos were more practical and economical than batteries as storage density in batteries was very low at this time.

Replaceable battery lights had a rebirth after the conception of alkaline batteries which permitted much higher storage densities.

In recent years there have been many advances like exceptionally efficient dynamos, improved storage density in rechargeable batteries (thanks to the laptop computers industry), high-output light emitting diodes (LEDs) and white LEDs, and finally the high intensity discharge (HID) lights that come from the automotive sector to improve the quality of bicycle lighting systems.

The general agreement is that if you ride after dark you should use lights.

This is a legal requirement in most places and it is also mostly recommended that you wear bright and reflecting cloths to be easily seen by others.

Even though there are almost no published studies about the correlation of the use of bicycle lights with increasing safety on the road, it is evident for anyone who drive at night that cyclists are only seen if they carry bike lights and reflecting clothes.

According to Vélo Québec, only 12 percent of night-riding cyclists there use lights, despite the fact that it is required by law. And 29% of the bicycling accidents in Québec happen at night, while night riding accounts for only 2 percent of bicycle miles traveled. I believe this numbers speak for themselves.

Did you ever wonder how it is like to ride mountain bikes at night?

Make sure you will be seen this Christmas! 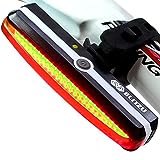 And remember to wear bright clothes every time you "jump" to another night ride!

Corey is a professional bike rider! Do not try this at home without wearing an helmet and protection gear. Enjoy your night rides!