Is This a Bed Bug?

If It Looks Like This, Then YES, It's a Bed Bug!

So you found a bug that looks like a bed bug, and you're worried it could be the start of a serious infestation in your home. Bed bugs are small, reddish-brown insects about the size of a grain of rice. You may have bed bugs and not even know it, because they hide during the day in hard-to-reach places like the crevices of your mattress. They come out at night to bite you and drink a little bit of your blood. Not good! Their bites are itchy red bumps, a little like a mosquito, but tend to occur in lines.

Look at the pictures of bed bedbugs here and have a look around, and under your bed and mattress. If you find a bug that looks like a bed bug, and it matches the photos here, then you definitely have an infestation. There are some very good home remedies for bed bugs -- you don't necessarily need an exterminator! There are also some good ways to protect your home and sleeping area.

I hope you don't have bed bugs, but if you find a bug and it looks like a bed bug, I hope the information here helps you deal with your problem.

Bed bugs used to be a problem in the south, typically in sketchy hotels and otherwise dirty environments. Not anymore! Bed bugs are on the move, and are becoming a common problem in many northern areas of the United States and Canada. A hotel that I stayed in many times in Winnipeg, Manitoba, had be temporarily closed because of a bed bug problem -- unheard of ten years ago! It may be due to global warming, or it may be just a natural range expansion that some insects undergo from time to time, but either way, bed bugs are a new kind of insect pest in a new area.

What Do I Know About Bugs?

My relationship with insects goes way beyond a passing interest: I am one of those humans who are truly bug-obsessed: I camp alone in jungles and deserts, seeking insects for my huge collection; I donate specimens to museums and studies; I am in the process of building an online database of all the insects on a small island in Panama. I also draw insects, and I currently have an exhibit of original pen-and-ink artwork on display at the local nature center. My art is also available printed on houseware like napkins and aprons, and I also have a line of t-shirts.

With all of this going on, you'd think my profession might be as an entomologist, or insect researcher, but in fact I am simply a middle-school teacher.

Is This a Bed Bug? - Bed Bug Feeding on Human Blood

This is a close-up of an adult bed bug feeding. It has its needle-like proboscis in the flesh of its victim, and it has injected a numbing/anticoagulant that helps the blood flow and keeps the person from feeling the sting and waking up. In this way, the bed bug is a lot like a mosquito, which also uses chemical agents to help them feed on the blood flow.

Nature's Wisdom Food Grade Diatomaceous Earth is milled at a consistency much like flour. It's made of a naturally occurring fossilized shell (diatom). It's considered safe and organic for home and garden use, and over the years has been a staple in organic gardening. There are only four DE deposits in the US that are considered "food grade." Apply this safe powder in all cracks and crevices, closets, baseboards, and mattresses.

Is This a Bed Bug? Bites and Evidence - These Are Bed Bug Bites!

Bed bugs belong to the insect order Hemiptera, which includes the "true bugs." Most of these live out their lives on plants, and some prey on and help control caterpillars and other insects. Some, however, like the bed bug, are more of a problem. For example, the "kissing bug" of Central and South America behaves similarly to the bed bug, waiting until dark to crawl out of its hiding place and onto the face of its human host, where it bites thin-skinned areas like the lips and around the eyes (hence the common name). Unlike the small bed bug, though, kissing bugs are big -- over an inch long -- and they spread Chagas' disease, which can reach epidemic proportions and seriously sicken its victims.

One very effective way to protect against bed bugs is to block them from ever making a home in your bed. Keep them out of your bed with this effective and widely used method. The hospitology mattress cover is one of the best and most effective of its kind. It also protects your mattress from spills, bed-wetting, dust mites and allergens. It has extra-tough seam construction, a high thread-count fabric shell, and a full 1ml thick polyurethane waterproof layer.

Is This a Bed Bug? Bed Bug Infestation - Adults and immatures clustered around a bed frame

This is a pretty typical bed bug colony, uncovered in the wood frame of a bed. The pale individuals are nymphs, the immature form of Hemipterans. All of them bite. It's not unusual for hundreds of bed bugs to make up one colony, and in such numbers these insects actually give off a smell that is easily identifiable.

"ClimbUp" is a pesticide-free barrier that goes between the bed leg and the floor. It not only traps and keeps bed bugs from getting up to the bed, it also monitors insect populations and tells you if you have invaders. ClimbUp also works for brown recluse spiders and other night-hunting spiders and insects.

Have You Ever Found a Bed Bug?

Poll Time -- Have you ever found a bed bug?

These cute beagles are trained to detect the tell-tale odor of bed bugs. If you think you have bed bugs but aren't sure, you can always call in the dogs!

Is This a Bed Bug? Glue Traps that Really Work

These small but effecting glue traps not only kill bed bugs and another crawling insects, but they also show you exactly what insects are crawling around your bedroom at night. Safe and effective, and also good for spiders and cockroaches. 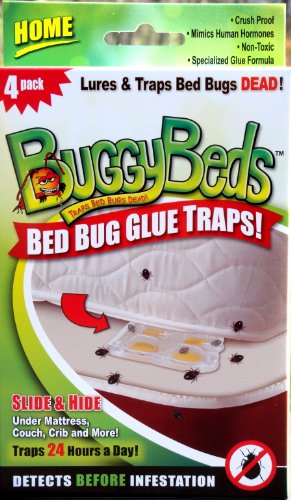 Is This a Bed Bug? -- Adult Female