Years before Melatonin became popular my father who is always astute with all the latest natural remedies started telling me about Melatonin. The first thing I thought of was "isn't Melatonin the thing that makes you tan?" Well Melatonin naturally occurs in the body and is what regulates sleep. It's what tells your brain it's time to shut down. Turns out the warm milk trick is about helping produce Melatonin in your brain as that's what get's you sleepy.

When I first started learning about the drug it was before it was available here in Australia and it was waiting on approvals in the US. It was already available on the internet of course! Because I was a law abiding citizen I refrained from using it at that time. I've tried Temazepam, Phenergan and even used Valium in desperation. I've wasted money on various herbal remedies such as Valerian and Melatonin has been a miracle for me.

I have heard some people not having results, but from all those I've discussed it with I think the secret is finding the best dose for you. I personally use 3 mg and find this to be effective. There are times of intense stress that it takes a while to work, but I'll get there eventually. I have read some people getting a better result with 1 mg or even 0.5 mg.

Why Other Natural Remedies Fail

I liken natural remedies for sleep as trying to take a tic tac for a headache. Sleep difficulties especially if associated with depressive or other mental illness cause our brains to be in a state of malfunction and Melatonin addresses the issue with the substance our brains need to wind down.

If you have a mild difficulty sleeping and/or are highly sensitive to natural medicines they may be effective for you. But I found personally it was just money down the drain. Many natural remedy formulas are expensive as well, but I found Melatonin is extremely affordable and I always have some in the house now.

My children (aged 9 and up) have had effective relief from sleeping difficulties with Melatonin as well. The reason I finally gave it a go is after years of my father raving about it a GP recommended it for one of my teenagers. By this stage it was lawfully available as a herbal remedy online. It was at this time that I questioned Melatonin's interactions with other medications and he said he had recommended it for psychiatric patients on a variety of different concoctions of psych meds and never had a problem.

Interesting Tips on Melatonin Use

The best thing about Melatonin is that because it is naturally occurring in the body, unlike other sleep medications you don't build up a tolerance to it. Temazepam for example as well as other classes of Benzodiazepines are effective but you can build up a tolerance quickly and higher and higher doses are needed to get a result. Dependence is always a danger with these types of medications.

Phenergan is an effective drug, but despite what chemists or doctors day I have found it loses effects over time. The other difficulty is that there is growing concern of it's use with children. Melatonin on the other hand is a safe alternative.

The after affects of many prescription sleeping tablets is often waking up sleepy. This means that the day is off to a bad start despite having managed to effectively obtained enough sleep through the use of the medication. This type of medication can be effective in the short term to restore the body clock but if a person has long term sleeping difficulties or is combating mental health issues then I would absolutely recommend Melatonin. 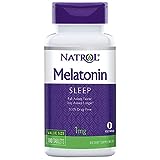 Natrol Melatonin Tablets, Helps You Fall Asleep Faster, Stay Asleep Longer, Strengthen Immune System, 100% Vegetarian, 1mg, 180 Count
Melatonin comes in a variety of doses, up to 10 mg. I personally have gone as high as 6 mg but find that 3 mg is most effective. In coming to this conclusion I have experimented with various levels and I have heard testimonials from people of having effective relief from lower doses. It's important to find what works best for your brain.
Buy Now

Personally I have found Melatonin to be an effective natural remedy for sleeping difficulties. It's important to find the amount to take that works for you as results can vary. The important thing though is that it's safe due to the fact it is a substance that occurs naturally in your brain. I find there is no after effects and I wake up refreshed unlike prescription medications.