Burn Extra Calories While You Work ... Without Really Thinking About It

My husband and I both have sedentary jobs, he at an office and me at home. For me, though, being self-employed, it's much easier to get up every so often and move and exercise during the day. Sometimes I putter around the house, cleaning. Sometimes I play with the dogs for a few minutes. Sometimes I take extra time and go out for a walk, and I often go to Jazzercise class in the morning. I can always finish my work later.

My husband, though ... he's tied to a time clock and stuck at his desk all day, which not only isn't good for circulation, it's also not great for the metabolism, especially as he's getting older. And he's been trying to lose some weight, so the more calories he can burn even while sitting, the better.

Sure, once in a while he gets up even earlier than 5:30am and exercises before work, rides his bike to and from the office in the warmer weather, and works out in the evening at least a few days a week. But he was recently thinking about how he could do more, physically, with those 8+ hours a day he spends at the office.

Then we happened to talk to a friend of ours -- a very fit girl, who told us that she works on her computer while walking on a treadmill. That's definitely not feasible at my husband's job -- not to mention that he'd probably fall off the thing if he wasn't paying attention -- but it did get us looking around for ways he could move a bit while seated at his desk.

And then we came across this simple, inexpensive exercise pedal exerciser and said, yep, that's the ticket!

For three weeks now, my husband has been pedaling away at his desk -- not hard-core stationary cycling but an easy, constant motion that doesn't get him out of breath at all and doesn't distract him from what he's doing or who he's talking to on the phone -- and, although he's not changed his eating habits or increased his other exercise regimen, weight has been coming off more steadily. He also says he's been sleeping better, that his legs haven't been cramping up, and that he just overall feels better at the end of the day.

An Adjustable and Versatile Exercise Device -- Not JUST for Desk Jobs

Not only is this simple device great for people who have to sit all day at work, it's also good to use while watching TV, reading, while recuperating from an illness or injury, or when you're a passenger on long rides.

These peddlers are really beneficial for people with arthritis or for those with balance issues who need to exercise while seated.

You can adjust the tension of the "arms" to increase or reduce resistance, but you don't have to pedal hard or work up a sweat to reap the benefits. Even an easy, constant movement will keep the blow flowing and burn extra calories, not to mention keep your metabolism working more efficiently even when you're asleep.

This exercise pedaler can also be used for your arms, moving the pedals with your hands.

Here are two versions of the Drive brand peddler. You can find out more about them and the company on their website: Drive Medical Design & Manufacturing.

Drive Medical 10270KDRSV-1 Pedal Exerciser, Silver Vein Finish
This is the model we have. It required a little assembly, but that was easy and quick.
Buy Now

If you're someone who likes data, this model has the added benefit of keeping track of calories burned, how long you've been pedaling, how many revolutions you've made with your feet or hands, and your RPM. So if you want to be sure you've burned off those cookies somebody left out in the office lunch room, just keep pedaling and check the read-out at the end of the day.

Then, if you haven't quite burned off that last cookie and want to pedal some more while you watch the evening news or your favorite guilty pleasure reality show, just fold it up and take it home. 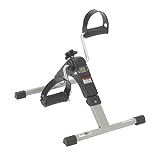 Video Reviews of Both DRIVE Models Above