Remedies for not snoring

Why do we snore?

In most people, the snoring reason is unknown. Some possible causes include: being overweight, having the twisted or deformed nasal septum by nasal polyps, nasal congestion from colds or allergies, or have sleep apnea.

It may be due to changes in the mouth and throat as swelling of palate, tonsil problems, which are blocking the airway, low muscle tone, language too large, very large bones of the face, antihistamines, or alcohol to bedtime.

Snoring can be a sign of this disorder. This means that there are periods where you stop breathing for more than 10 seconds while you sleep. The episode is followed by a gasp when you start breathing again. Sleep apnea is less common than snoring although.

Snoring can transform the bed in an aggressive battle. British researchers presented a study in 2013 that concluded: four out of ten people, who snore, argue with your partner, while a quarter did not share a bed directly by those pesky snoring.

How to cut snoring?

The National Institutes of Health (NIH) tell: Avoid alcohol and other sedatives at bedtime, stop smoking, and sleep on your side if possible. Lose weight if you have too.

Known for its expectorant powers, it opens the airways and soothes the throat. An effective mix is ​​to take essential oils, mixed with equal parts water and spray the bedside before bed. You can also buy paper and make steam inhalations.

It is an excellent natural expectorant, removes phlegm, and is useful for controlling infections in the throat and decrease irritation, a reason that may be causing snoring. Gargle with warm infusion raspberry leaf and two tablespoons of honey in half cup of water.

Cheer up with this anti-snoring potion: mix a cup of olive oil and 50 grams of rue in an airtight container. Let marinate, covered, for 2 weeks, strain and store in a dark container. Apply before bed, on the nostrils and neck.

A grandmother’s remedy maybe you can help reduce them. The onion is a decongestant natural and airway, obstruction is a cause of snoring. You cut it in half and sprinkle salt on it. Then you leave it on a plate on the nightstand.

This is the most effective treatment for obstructive sleep apnea and has become a widely used treatment. It consists of a nasal mask that keeps the airway clear by providing positive air pressure in that area.

It is a plastic mouth appliance may be helpful for people with mild sleep apnea or who snore very strong, says the National Sleep Foundation. It will be installed by a dentist, and conforms to the jaw and tongue to keep the throat and airway open during sleep.

A cushion which, in the form of a bear, has a device capable of detecting snoring have invented in Japan. In that case, the bear raises one of his legs to invite you gently to turn sideways and thus stop snoring. It is better than getting a nudge from your partner.

The National Sleep Foundation reports that it is believed that over 10 million Americans have obstructive sleep apnea. More than half of those people are overweight, and most of them snoring heavily. They advise people to help their partners to make a medical consultation. 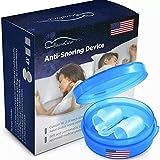