If you have had to eliminate dairy from your diet, you have probably considered the merits of soy milk vs almond milk, two very popular milk substitutes. Both are derived from very nutrient rich plant sources and have many health benefits. Soy milk is made from soybeans soaked in water and ground until they become liquid. Almond milk, on the other hand, is derived from ground almonds and water. Here are some more nutritional attributes of soy milk and almond milk.

Advantages of both drinks

As mentioned, soy milk contains a rich array of nutrients. These include omega-3 fatty acids, unsaturated fat, a mere four grams of fat in one 250 ml serving, and various proteins, calcium, iron, sodium and riboflavin. As a result, soy milk has these special benefits.

What to watch out for:

Have you tried some soy milk lately? 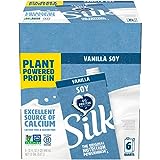 Here are some nutritional facts about almond milk. As mentioned it is very low in fat, contains fiber and protein as is free of cholesterol and saturated fat. In addition it is rich in omega fatty acids and minerals such as manganese, selenium, and has especially high levels of vitamin E. As a result, almond milk

What to watch out for:

Have you tried almond milk yet? 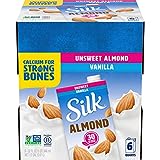 Which do you prefer? Soy milk or almond milk