Why I Rock and You Don't

Why Do I, a High-Functioning Autistic Person, Rock, Spin, Flap, etc?

Have you ever wondered why autistic people rock, flap, spin, over-focus, or engage in other repetitive behaviors? I cannot speak for all autistic people but I can speak for myself or at least type for myself. For me, it's about bringing some kind of recognizable order I can count on to an incredibly chaotic and out-of-control universe. If you think you understand how chaotic a person with even extremely high-functioning autism finds the world, I suggest you read on.

Thirty Seconds in My Seat

All of this is going on, likely faster than you can read it and louder, brighter, and more intense than you might expect.

You can tune out the tinkling of the water moving through the filters on the cat fountain and the aquarium. You can ignore the feel of the breeze from the ceiling fan stirring the tiny hairs on the back of your arms and the areas of alternating warmth and coolness on your left arm created by the slats of the shades blocking most of the sunlight. You likely don’t even notice the slight flicker of the lighting caused by the movement of the blinds caused by the breeze or the movement of people outside seen through blinds through the corner of your eye. You can ignore the feeling of a loose hair just barely touching the back of your left upper arm as well as the pressure of the stiff cotton fabric of your waistband where it lies between your back and the chair. You may not even be able to notice the pressure of your glasses, slightly heavier on one side of the bridge of your nose than the other, resting on your face or even on the back of your ears.

I don’t know if you’d even be aware of the scent of slightly decayed cut grass or the leftover and un-refrigerated scent of cooked onions and vaporized grease catching you in wafts above a general dust and new carpeting smell. You probably don’t notice the slight change in pressure that occurs every time someone opens an apartment or entry door ever since we got the new door with more clearance under it. You may not even realize your right eye and your left shin both itch or that there’s a dull, throbbing ache in your left knee, lower back, left brow ridge, right wrist, and lower left ribcage. You’re probably bothered by your squeezing headache and tight right side pain but you could probably shut them out if you tried.

I can’t always tune out the dozens of sounds, smells, sensations, and sights around me and inside me. I’m always trying to focus on one or two things through a cacophony of stimulus. And that’s just a few second snip from the center of one of my typical good days. Add actual human interaction to that equation and it’s only a matter of degree as to how much and of what kind an autistic person can endure before he or she has a meltdown. And that is, I re-iterate, a peep into what it’s like inside my relaxed mind on a good day when nothing unusually annoying is going on.

Some people refer to autistic people as flat or unfeeling when, it seems to me, we suffer from not an absence of feeling but an unpleasant excess of it.

I Know I Can't Be the Same, So I Have to Take this Author's Advice and Be Different

I can fake normal to only a certain extent. At some point, the facade just doesn't hold up and the real me comes through. I can't change that so it's best to just go with it. 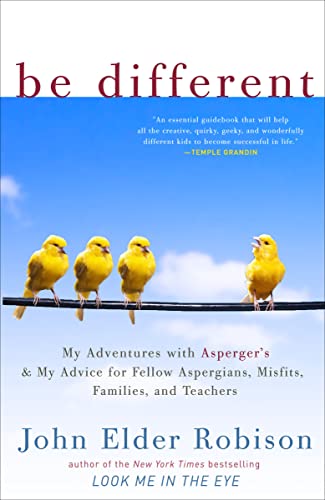 Be Different: My Adventures with Asperger's and My Advice for Fellow Aspergians, Misfits, Families, and Teachers
This book expresses what I've had to learn the hard way. I can't be like everyone else so I may as well embrace being weird and different me.
Buy Now

So What Does Rocking Do?

Some, possibly many people on the autistic spectrum are bombarded with and crushed under the stimulation of a loud, bright, and stinky full-contact universe. Most people not on the spectrum seem mostly unaware of the intense chaos they are a part of as well as their own impact on people around them.

Constant exposure to high volume and high intensity stimulus can make it impossible to maintain the illusion of predictability and control that most people need to maintain for mental health. Many Aspies and people on the autism spectrum are well aware that nothing is ever totally in our control. Our moment to moment experiences prove it time after time with little time in between to develop any false sense of security. People on the autistic spectrum are likely often unable to deceive ourselves into feeling safe or in control of situations when strong evidence to the contrary presents itself.

All the repetitive things people on the autism spectrum do are soothing. Stimming gives the autistic person something safe and predictable to focus on. These behaviors provide a real-world framework upon which to build an illusion of control and safety.

Many people on the autistic spectrum are bombarded with and crushed under the stimulation of a loud, bright, and stinky full-contact universe.