A History of St. Patrick's Day

Every year across the world hundreds of thousands of people celebrate St. Patrick’s from Ireland to Australia, the United States to Argentina.  Flocks of green-clad folks pack the streets for St. Paddy’s parades, crowd into bars for green beer, wear silly leprechauns on hats and shirts and everyone claims to have a little Irish in them.

A holiday filled with fun and humor, just the like the Irish people.  In Ireland, however, it is also a religious holiday, commemorating the life and teachings of St. Patrick, the patron saint and Apostle of Ireland.  Born around 387 (though some place the year at 373 and some at 390) in Kilpatrick, near Dumbarton, Scotland, St. Patrick’s given name was Maewyn Succat.  Patricius was his Romanized name, the name under which he took his religious teachings and so he is known today as St. Patrick.  Kidnapped and sold into slavery in Ireland when he was 16, he escaped six years later after an angel appeared to him to told him to leave.  He went to Britain and began his training, which lasted 15 years.  While in training, he was visited by an angel, or perhaps Jesus, and told he was to convert the pagan Celts on Ireland to Christianity.  Over the course of his lifetime he founded 300 churches and baptized 120,000 Irishmen.  He died on March 17, 461.  Irishmen have celebrated on this day for over 1,000 years.   By the 7th century St. Patrick had become a legend in Ireland and in 1762 the date was place on the Catholic church’s liturgical calendar.

St. Patrick became such an important figure in Irish history for his teaching and promoting Christianity, which is today one of the most important aspect’s of the Irish life. Take a drive through Ireland, round a sharp turn on a mountain road, and the first glimpse of nearly every Irish village is the steeple. After driving one-lane roads in sometimes harrowing conditions, the steeple represents the end of the road, sanctuary, and safety, and 1,000 years ago must have been that much more important. St. Patrick eased Christianity into the pagan beliefs and essentially melded the two, making the conversion easy and natural for many. The Celtic cross is a classic example of how St. Patrick merged the two religions. The Celtic cross is the classic cross with the circle representing the sun, because the sun was very important in Druidism. The shamrock, an emblem of St. Patrick’s Day, represents the triple goddess Mor-righain, triplicity, or the “3”s, which are very important in Druidism and to the pre-Christian Celts. St. Patrick used the shamrock to teach the concept of the Holy Trinity – the father, son and holy ghost. In a seamless fashion, St. Patrick brought the Irish people this new religion, which so resembled the old, and easily baptized them into it.

St. Patrick’s Day enjoys quite a different history and tradition in Ireland than elsewhere. As it was, and is, a religious day, it is celebrated in the conservative manner of most religious holidays. In Ireland the day is treated as any church day (Sunday) would be. People attend church and wear a small bunch of shamrocks at their breast to celebrate the teaching of the Holy Trinity by St. Patrick. Every year thousands of shamrocks are flown to Irish embassies around the world so that all Irishmen may take part in the tradition. After church they head home for a large traditional family meal of Irish bacon and cabbage. It is a day for family and rest. Until the 1970s pubs were not allowed opened on St. Patrick’s Day. In 1995, Dublin held the first St. Patrick’s Day parade in Ireland, mostly for the tourism potential. Today it has turned into the 5-day St. Patrick’s Festival complete with art shows, plays, concerts, fairs, and games. 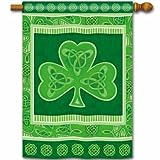 In other parts of the world, particularly Canada and the United States, celebrations on St. Patrick’s Day take a much different form.  The first parade was held in New York City in 1766.  Parades are also now held in Chicago, Dublin and many other cities around the world.  The “wearing of the green” became a way to celebrate the Irish culture and heritage and heralds back to the Irish “wearing of the green” – the shamrock.  Another North American invention for St. Patrick’s Day is the green beer.  This tradition cropped up in the US and has been taken a step further in Chicago with the dying of the Chicago River where, for this one day each year, it flows green.  Restaurants, bars, and eateries throughout the United States sell tons of corn beef and cabbage on St. Patrick’s Day, touting it as the “traditional” Irish meal.  The truth is that poor Irish families who had emigrated to America found corn beef to be a more affordable substitute for their Irish bacon, which was near impossible to find in the United States in the late 1800s.

As a religious holiday and a fun one, go out and drink green beer.  Wear the green and enjoy the parades.  Say a prayer and reflect briefly on St. Patrick’s vision for Ireland, as well the incredible Irish culture, without whom this day would not exist for us all to enjoy.  Slaínte!