A New Christmas Tradition to Enjoy with Children 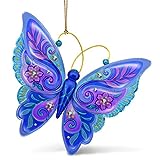 I love Christmas. It's my favorite holiday of the year. It's such a wonderful time for gathering and celebrating together. It feels even more festive when I remember for a moment that the brightness and cheer is happening in the middle of the darkness and chill of winter.

When families, or any close group that includes children, get together during the holidays, it's especially fun to have traditions that focus on the children. Those traditions build warm memories for children that can last them a lifetime; I've always thought it wonderful that the smallest of childhood memories, like making paper snowflakes at Christmas or having one more sleepy look at the tree lights as I was going to bed, have made me happy at times that should have been unhappy.

Building those warm, happy memories for my grandchildren were right at the top of my grandparent to-do list. One idea that came to me when they were very young was starting a new tradition of giving them an ornament each year.

The ornament that interests me isn't a "first Christmas" ornament (though those aren't bad) or an ornament with the year stamped on it, and it isn't some collector's ornament. It's a tiny yellow tin biplane being flown by a squirrel, or a big, sparkly fish playing the saxophone, or a polar bear in a stocking cap who's fishing. It's a blown glass kewpie doll, or a 4 inch high galleon, or a camel carousel figure with a golden harness. It's a bumble bee, or a hen sitting on a nest, or a rabbit wearing a tutu. These ornaments have personality, and they were meant to be used.

Before I continue, I suppose I should admit here that, even though I'm immune to collecting in almost every other way, one of my guilty pleasures is finding new Christmas tree ornaments. I was in my forties before I first began to regularly buy a few new ones each year. I bought ornaments that were unusual. Then, as grandchildren came into the picture, I found myself looking for ornaments that children would like. However, I was happy to find that friends who visited also loved the very same ornaments, and would spend time looking at the variety on the Christmas tree.

I had enjoyed certain ornaments on our Christmas tree during my childhood, and had asked for a few of them to take to my own home. Remembering the Christmas occasions called up by those old ornaments was the reason I started having my grandchildren each pick an ornament every year that would someday be on their own Christmas trees.

I've since found that other people also have this tradition. I had known about the occasion ornaments and the collector's ornaments, but it's a happy surprise to be chatting about Christmas with someone I don't know, and to find that we've both been buying ornaments for exactly the same reasons at Christmas for years. I usually meet these folks in front of the ornament rack.

Before they grew up, my grandchildren came to spend the first weekend of December with me. We went to the hit Christmas movie, visited the carousel or went bowling, had a pizza, and watched some Christmas shows on TV. And we spent a whole afternoon bringing the ornaments down from upstairs, unwrapping them and putting them on the tree while we listened to Christmas music. We had cookies or another snack, with hot apple cider. The grandkids always had a wonderful time, talking about the ornaments they were already familiar with and enjoying the new ornaments. I was amazed that they knew not only their own ornaments from past years, but some of each other's ornaments. I also had a wonderful time, and enjoyed watching them fly, drive, swim or steer ornaments over to the tree.

When they came a few weeks later to do our gift exchange, they had three choices of which activity they wanted to do first. They could see what was in their stockings on the mantle, open the presents under the tree or claim the ornament each had decided on this year. They had already agreed among themselves before they arrived which one it would be, and they always chose to do the ornament first.

They each had already considered and settled on which unclaimed ornament was this year's pick. They had obviously discussed it and negotiated beforehand, because every child knew which ornament every other child wanted by the time they were claimed, and we never had any difficulties over two of them wanting the same ornament. (If it had been a problem, I was prepared to toss a coin for them, but I never had to.) When each child picked the ornament for that year, I wrote the child's name and the year in gold ink on the ornament.

As I mentioned earlier, my plan in having the name and year on the ornament was to be able to make a package of ornaments for each of them to have on his or her own first Christmas tree as an adult. It was interesting that, as they became teens and sometimes one or more of them wasn't here for the gift exchange, the children who were there would choose not only an ornament for themselves, but one for the missing teen.

(A quick tip, if an ornament is picked that you can't write on, you can put a small tag on the string, and write the child's name and year on it, or put a number on the tag, and keep a baggie for storing the ornament. Inside the baggie, the number on the string, the name and the year are written on a piece of paper.)

As the children grew, I found myself doing a variation of this custom with other children who came to visit during Christmas, then to other adults. For them, I place the ornament in a little bag and they take it home with them. One year, I bought a dozen little Chinese food takeout boxes with Santa pictures on them and wire handles, and I used them for take home ornaments for the next two Christmases. I liked having people take their ornaments home in those little decorative boxes. Giving ornaments right off the tree is a fun occasion, and nobody seems immune to finding just the ornament they want from the tree. The only two rules are that they can't take an ornament that already has a name and year on it, and there are a very few old ornaments that they can't take - the ones with my childhood memories attached to them.