An Enthralling Day at Nubra Valley

Hemamala B is a Postgraduate, residing in Mysore, worked for Multinational Company in South India. She loves travelling and trekking.

An Enthralling Day In Nubra Valley Of Ladakh Region

It was yet another fantastic day for us at Great Himalaya. We were travelling in and around Leh, the main city of Ladakh region in Jammu & Kashmir state of India. On June 15, 2018, we decided to visit Nubra Valley, appr. 160 KM away from Leh city.

Nubra Valley has an ancient history. During 2 BC till 15 century, Chinese merchants used to transport goods on camel’s back and were travelling across the cold and tough terrain of Himalayas, through Tibet. The goods, mainly the precious ‘Silk’ would move further on this trading path, till the Middle East Countries of those days. This was a long, strenuous trading path named as ‘Silk route’. With the advent of many developments in trading patterns and platforms all over the world in later days, this route lost its trading significance, but the name still remains as such. The name sounds silky smooth, but the terrain is very difficult to access even now in 21 century, despite we have many modern amenities. Travelling on Silk route is not smooth!

Our journey to Nubra valley started at early morning from Leh. It was a long drive of nearly 160 km, through the rough dry , dusty roads. We encompassed few green hamlets on the way, where there are small villages.

It is thrilling to note that, this route crosses ‘Khardung La Pass’ , which is at 17982 ft elevation from sea level and it is the highest motorable road in the world! Wonderful it was, we got down to take few snaps of picturesque Himalayas, moving clouds around, snow fall, avalanche, snow capped mountains….bundle of Himalayan splendor! There is a canteen at Khargung La Pass and we had hot soup and momos to beat the cold.

From Khardung La Pass, it takes almost 4 hours to reach Nubra Valley. It is located between the Ladakh and Karakoram mountains. The rivers Shoyak and Siyachin have created a green belt in Nubra valley. Despite, adverse conditions and very less suitable land available for agriculture, local people cultivate Wheat, Barley, Mustard Seeds and vegetables.

We reached Nubra valley by noon. Our accommodation was booked at Hotel Mountain Camp. It was a silent, picturesque place and we had a wonderful stay in fully equipped tents.

Then we visited the cold dessert in ‘Hunder village’. It was fascinating to watch many caravans of double humped camels moving around. Double humped camels are seen only in Nubra valley of Ladakh. In fact, these are reminiscence of ‘Silk Route Trading’. These are the Mangolian Bactrian breed camels that the merchants used for transporting goods. After the trading route was closed, long ago, the camels were abandoned.Those camels grew into a large herd later on. Currently a ride on double humped camel is a major tourist attraction in Nubra Valley.

In Nubra valley, tourists could enjoy local cultural show. Though we did not understand the local language, the simple music and rhythm of ‘Tama’ a local drum really enthralled us.

We were told that, Ladakhis are happiest people in India. They believe in community living, share agriculture work and support each other and they are content with low income. However, this trend is changing with the advent of commercial activities everywhere. Locals say that lot of construction activities and infrastructure development is happening in the region and this spoils not only the environment but also the impeccable culture of the region.

Ladakhi people are very warm and their hospitality is outstanding. Main source of their income was agriculture till recent past. Tourism is their important source of income now days. They take care of tourists very well. Since the winter is too cold to bear in Ladakh region, most of them go to lower levels like Jammu in winter.

Though Ladakh is part of India, it has very different lifestyle. Further, most of the people follow Buddhism and their culture and beliefs are influenced by Tibetan lifestyle. There are many Buddhist temples and Monasteries in Ladakh.

How To Go To Nubra Valley ?

There are flights from Delhi to Leh airport. Local transportation is available in the airport. Online booking is possible for accommodation and travel assistance. 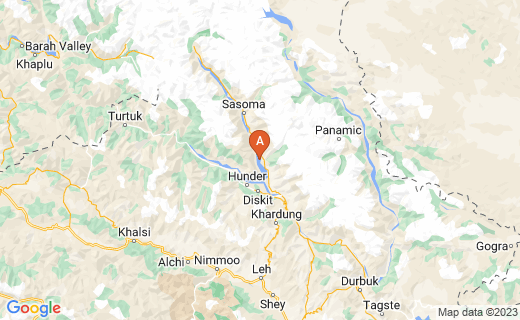 Best time to visit Nubra Valley and other places of Ladakh region is from April to June and September to October.

Ladakh region ( Leh, Nubra Valley, Zanskar Valley, Kargil etc) receives heavy snow fall during winter season. Therefore, it would be better to avoid November to February. July to August is rainy season and it may not be a comfortable time for travel.

Any individual, who admires nature and appreciates different culture will enjoy a trip to Nubra Valley. There are ample opportunities for trekking.

Since Ladakh is located above 11000 ft from sea level, some people may experience breathing problem or mountain sickness, initially. In that case, nothing to worry, take rest, drink hot water, be slow in walking and relax.